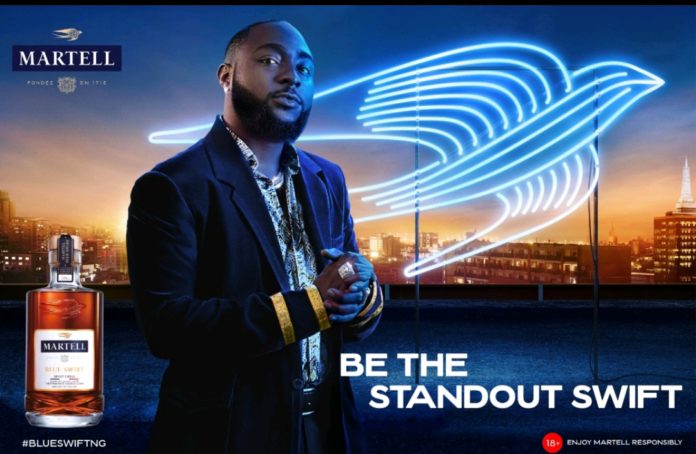 ….as Martell Nigeria’s “Be The Standout Swift” TV ad is selected as #2 globally

Ugo Aliogo
Pernod Ricard Nigeria, the local affiliate of Pernod Ricard, a global leader in wines and spirits, has been awarded for creating one of the most liked ads evaluated out of 13,000 digital, TV and outdoor ads in 75 markets.
A statement by the group said the international award was bagged for the company’s Martell Cognac campaign ad tagged, Be The Standout Swift which features popular singer-songwriter and music producer, ‘Davido’.

The statement said with winners spanning across nine markets and eight categories, the ad was revealed as number two amongst the Top 10 TV ads at the Kantar Creative Effectiveness Awards 2022.

The statement also noted that Kantar is the world’s leading data-driven insights and consulting company. For the past three years, through the Kantar Creative Effectiveness Awards, the company continues to recognize the most impactful ads as judged by consumers.

The winning ads were defined qualitatively and quantitatively, with the awards celebrating those which were most impactful in building brands, driving sales and increasing long-term equity.

Commenting on this feat, Creative Content Manager, Martell, Lanre Odutola, said: “This execution was specifically created for the Nigerian market; it is deeply anchored in local culture, featuring Davido (Afrobeats Icon & humanitarian), whose own ethos; ‘we rise by lifting others’ mirrors Martell’s ‘audacity shapes legacy.
“This ad brings to life Martell’s brand purpose – standing out from the crowd by redefining the status quo; and we believe Davido and what he represents is the very definition of a Standout Swift.”

The Managing Director, Pernod Ricard Western Africa, Sola Oke, said: “Kantar assesses the best creative content presented by advertisers and their agencies, so this is a particularly high accolade given that the TV commercial is rated strongly amongst consumers globally. This award reflects the creativity and innovation that sits at the core of our business and showcases our commitment to creating emotionally relevant consumer stories, deeply anchored in local culture and nuance.”

The “Be the Standout Swift” ad, created by BBH London features ‘Davido’ in an emotive video describing what it means to be audacious and daring; to create one’s own path while uplifting others along the way with eye-catching visuals and dramatic shots. The ad was also one of thousands rated highly amongst several advertisements created in countries as diverse as the United States of America, Mexico, the United Kingdom, Italy, India, and Brazil, and others.