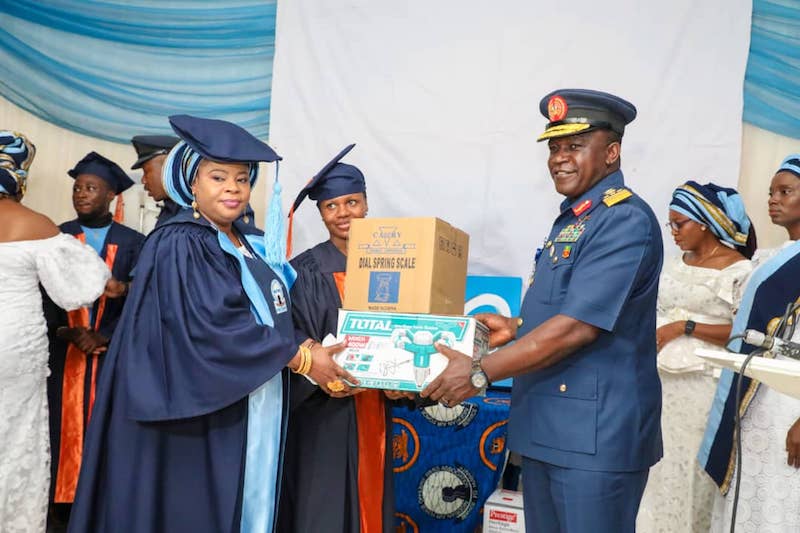 Chiemelie Ezeobi reports that whilst the Nigerian Air Force is focused on operational efficiency, the Nigerian Air Force Officers’ Wives Association, NAFOWA, on the other hand, is complimenting their efforts with empowerment of dependents, widows of deceased personnel, as well as the less privileged in the society

Undoubtedly, women have a significant role to play in the socio-economic development of any society. For the Nigerian Air Force Officers’ Wives Association (NAFOWA), this rings true as they have been bestowed on the responsibility to empower its members, dependents of serving personnel as well as the less privileged in their respective host communities.
For more than five decades, the group, which started as a tea party for wives of officers, soon evolved to actually carry out with different programmes aimed at empowering women and barrack youths to acquire skills in order to be self employed.
With their motto as “Service to Humanity”, the focus of the association has been to reach out to the less privileged in the society especially women, youths and children through programs that add meaningful value of human existence.

Skills Acquisition, Vocational Training How do they actually do that? Over the years, the association, as part of its community service obligation, developed different skills acquisition and vocational training program targeted at women, widows and youths in the barracks and surrounding communities.

This program is done as part of their contribution at complementing the federal government’s effort to curb unemployment amongst youths. It is also aimed at building capacity of women by empowering then with necessary skills for self reliance so that they can better cater for themselves in a changing economy. It also caters for widows, especially those who lost their husbands in the campaign against insurgency in the North-east.

Essentially, the focus of the training program is on vocational trades and skills that can easily be converted into small scale businesses so that a steady means of income is created for the beneficiaries.

At the end of the training, the participants partake in an exhibition where they show off their newly acquired skills and are awarded certificates.

NAFOWA’s Complimentary Role to NAFIt would simply be stating the obvious to highlight that NAFOWA is to NAF what the knife is to the yam. It is also undeniable that while NAF personnel are focused on protecting the nation’s territorial integrity, NAFOWA is busy protecting the homefront and its environs by carrying out empowerment programmes that are far-reaching.

This sentiment was recently re-echoed by the 21st Chief of Air Staff (CAS), Air Marshal Oladayo Amao, who commended NAFOWA’s effort at empowering dependents of NAF personnel and the less privileged in the society.
Stressing that such efforts have impacted positively on ongoing NAF operations, the CAS further opined that such humanitarian assistance and knowledge acquisition programmes by NAFOWA has helped to keep the home front stable thereby ensuring full commitment on the part of NAF personnel in the discharge of their duties.

Speaking at the recently held graduation ceremony of the NAFOWA Skills Acquisition and Vocational Training Programme at the NAFOWA National Secretariat, Abuja, the CAS noted that NAFOWA’s efforts were also in line with one of the key drivers of his vision that harps on pursuit of purposeful training and human capacity development.
He went on to state that the training acquired by the graduands will no doubt complement the numerous poverty alleviation programmes of the federal government aimed at reducing unemployment, especially amongst youths and women.

He added that, “the programme was a means of financial independence, self-reliance, prosperity and personal development for the beneficiaries and their families and when the acquired skills are combined with other forms of academic endeavours, it offers infinite options and opportunities for employment and self-actualisation.”
Air Marshal Amao also urged the graduands to make the best use of their starter packs, just as he appealed to the organisers of the vocational training programme to monitor the beneficiaries’ progress with a view to ensuring that the objective of the programme was achieved.

Earlier in her welcome address, the NAFOWA National President, Mrs Elizabeth Olubunmi Amao, noted that in her quest to provide service to humanity, she had explored several options that could add meaningful value to the lives of women and youths in NAF Bases across the country.

” This quest”, according to Mrs Amao, “led to the birth of the vocational training programme”.
Expressing delighted at the seriousness and zeal with which the participants of the programme approached the training, she hoped that the skills acquired will enable them to kick-start their dreams of becoming vibrant entrepreneurs.

She also thanked the CAS for his continued support and encouragement to NAFOWA, stressing that the association would continue to keep the spirit of ‘Service to Humanity’ alive by embarking on similar projects that touch lives positively and make a difference to daily existence.

According to NAF Director of Public Relations and Information (DOPRI), Air Commodore Edward Gabkwet, this edition of the NAFOWA Vocational Training is the second under the leadership of Mrs Elizabeth Amao with 60 participants undergoing 12 weeks of intensive training in various vocational trades.

He said; “The participants were drawn mainly from widows of deceased personnel, dependents of serving personnel, orphans, youths and women from host communities who are largely unemployed or underemployed.”
Among the dignitaries that graced the occasion were the NAF Chief of Training and Operations AVM Jackson Yusuf; Chief of Accounts and Budgets, Air Vice Marshal John Ochomma; Chief of Medical Services, Air Commodore Olabode Babalola; Directors from headquarters NAF and other invited guests.

Mrs. Amao’s Holistic Empowerment
As the 21st National President of the Nigerian Air Force Officers Wives Association, Mrs. Elizabeth Olubunmi Amao set out to holistically touch the lives of all members, as well as the less privileged in the society.
So far, she has succeeded in tackling education, health, skill acquisition and vocational training for members and the less privileged, while carrying widows of late military personnel along.

In fact, under her leadership, the association has taken its CSR beyond the wall of the Air Force bases into their host communities and those living around the different Air Force bases, thereby going a long way to improve NAF’s civil military relationships.
Beyond this, Mrs. Amao has tried to make a difference by supporting educational pursuits, making donations to hospitals, boosting cancer screening, advocating for gender advancement, amongst others. Also, the association thrives in skills acquisition and empowerment programmes to ensure self-reliance.
All these she has done despite the fact that NAFOWA is a non-governmental organisation. Therefore, the association gets funding from the goodwill of the members of the public, corporate organisations, voluntary donations of members and enormous support of the NAF to carry out charitable activities in different communities across the nation.

While championing these causes, she has inadvertently uplifted lives, harmonised the members while helping the NAF in boosting its civil military relations with its respective host communities.