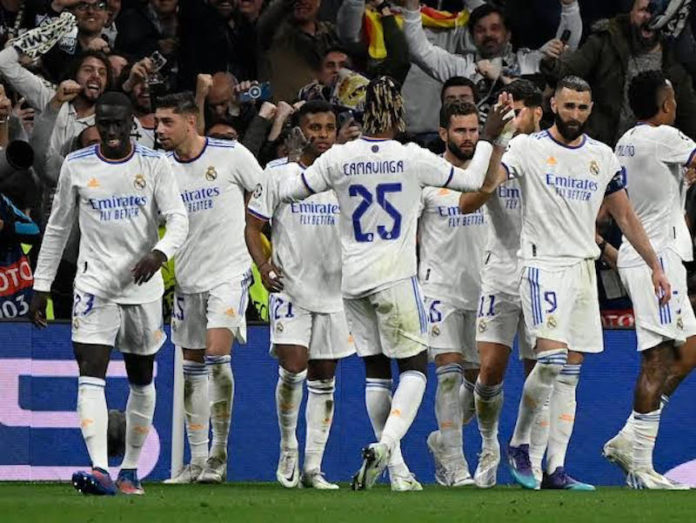 *It’s Liverpool, Real Madrid final on May 28 as City fall in incredible comeback

Real Madrid performed an incredible comeback against Manchester City  inside the Santiago Bernabeu last night to reach the final of the UEFA Champions League against Liverpool.

It is, perhaps, one game that will remain the talking point until the final on May 28 in Paris.

The final will be a repeat of the 2017/18 final in Ukraine when Sergio Ramos sent then red hot Mohamed Salah to the surgeon’s table.

Last night, Manchester City were two goals ahead on 5-3 aggregate going into the 90th minute after Riyad Mahrez’s strike had added to their 4-3 first-leg win last week.

But Brazilian Rodrygo  conjured two goals in two minutes to drag the game into extra time.

And 90 seconds later he levelled the tie with a header into the top corner after Marco Asensio flicked on Dani Carvajal’s cross.

That sent an already rowdy Santiago Bernabeu into absolute euphoria.

City, who thought they were going through to a second consecutive all-English Champions League final with Liverpool, were shell-shocked and could not respond appropriately after the likes of Kevin de Bruyne, Riyad Mahrez, Gabriel Jesus and Kylie Walker had been rested with few minutes to final whistle.

Both sides had chances to win the tie before that miracle by Rodrygo. Ederson denied Rodrygo a quick-fire hat-trick and then an unmarked Phil Foden fired over inside the box.

And so to extra time the game went – and it was Real who got the decisive goal in maybe the greatest Champions League semi-final ever.

Benzema beat Ruben Dias to a loose ball in the box and was brought down by the City defender. He stepped up to take the penalty himself and scored his 43rd goal of the season. There is no doubt it is the most important goal of the night.

Now, with another cup dream gone with the wind, the social media went abuzz last night with all manners of postulations.

Most City fans believed the curse placed on Pep Guardiola by Yaya Toure’s agent, Dimitry Seluk in 2018, was responsible for their near-misses of the most prized club trophy in Europe.

In 2018 in the wake of the face off between Pep and Yaya Toure, Seluk said: “He turned all Africa against himself. I’m sure that many African shamans in the future will not allow Guardiola to win the UCL. This will be for Guardiola an African curse. Life will show whether I am right or not.”