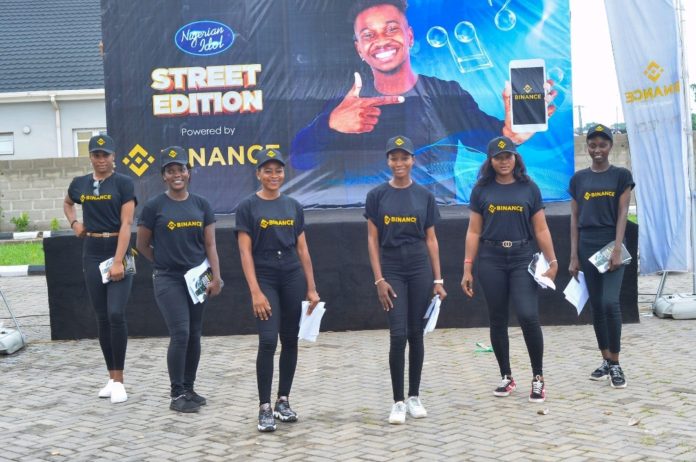 Binance the world’s leading blockchain ecosystem and cryptocurrency infrastructure provider, has activated the street edition of Nigerian Idol, the Nigerian version of the popular music competition television series, across university campuses as it strengthens its connection with offline audiences across the continent.
The group in a statement stated that earlier in the year, Binance announced its sponsorship of the Nigerian Idol, continuing its mission to drive mainstream crypto adoption in Africa.
The statement noted that the sponsorship deal made Binance the exclusive cryptocurrency and blockchain sponsor for the show.
The statement noted that for the street edition, the blockchain giant hosted entertainment competitions in university campuses across Nigeria including Lagos State University, Rivers State University of Technology, Institute of Management Technology and Igbenidion University.

The statement added: “The street edition featured musical performances with judges ranking contestants based on their creativity, the strength of voice and stage performances, mirroring the Nigerian Idol show. Students also played games with the opportunity to win free Binance merchandise and gift items. The initiative included lots of games, networking and crypto education.”

The Marketing Lead for Africa, Binance, Emmanuel Ebanehita, said: “We are excited to do this with Nigerian Idol. Entertainment has a great power to bring people of varying cultures, ethnicities and behaviours together and as a global brand that solidly drives growth in different facets, launching a Binance “Street Edition” is helping us connect, inform and educate people about crypto and its benefits. Ultimately, the goal is to drive mainstream adoption and this, we are doing in our own way.”

According to the statement: “In February, Binance kicked off its Campus Masterclass Series for Nigerian university students, in line with its mission to enable greater financial accessibility for Africans. The series was aimed at empowering students by exposing them to practical ways to gain financial freedom in a post-pandemic world plagued by economic downturns and rising inflation. Binance continues to show its commitment to connecting with offline communities across Africa.”