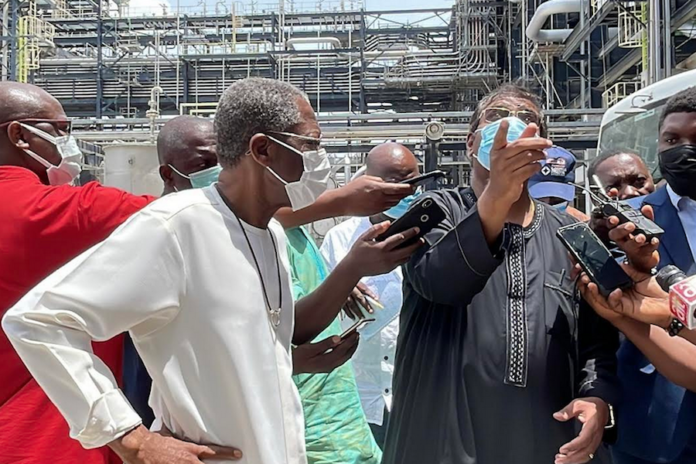 Eromosele Abiodun posits that the enabling environment provided by the administration of President Muhanmadu Buhari, which birthed the Dangote Refinery, $2.5 billion Dangote Fertilizer Plant, Lekki Deep Sea Port amongst others, has put Nigeria on the path of industrial revolution

After years of grappling in the dark, Nigeria is now on the path of irreversible industrial revolution, thanks to Africa’s richest man, Aliko Dangote and his massive petroleum refinery, $2.5 billion Dangote Fertilizer Plant.

The 650,000 BPD refinery located in Ibeju Lekki, Lagos will be extremely beneficial to Nigeria when it begins production.

The refinery, experts say, would stimulate economic development in Nigeria, meet 100 per cent of the Nigerian requirement of all liquid products (Gasoline, Diesel, Kerosene and Aviation jet), and also have surplus of each of these products for export.

That is not all, the scale and size of the massive facility is mind blowing. The Pipeline Infrastructure at the Dangote Petroleum Refinery is the largest anywhere in the world, with 1,100 kilometers to handle 3 Billion Standard Cubic Foot of gas per day. The Refinery alone has a 400MW Power Plant that is able to meet the total power requirement of Ibadan DisCo.

The refinery, which is due to commence operation later in the year would also impact positively on the Nigerian economy through conserving of foreign exchange and massive job creation.

Aside the refinery, there is also the $2.5 billion Dangote Fertilizer Plant recently inaugurated by President Muhammadu Buhari.

The Urea Plant, located at the Lagos Free Trade Zone, within the periphery of the Dangote Refinery currently under construction, is promoted by the Africa’s global enterprise, Dangote Industries Limited. Of significant importance is the timing of the inauguration. The plant would be pumping a fresh 3 million tonnes of granulated Urea into the country and the world supply amid the impact of increasing prices in the aftermath of the Russia-Ukraine war.

With the current economic malaise facing Nigeria and which has decimated foreign exchange intake, the Dangote Fertiliser would be reversing an unsavoury trend in Nigeria’s balance of trade in which hundreds of millions of dollars is expatriated on fertilizer import annually.

It was in recognition this that a federal government delegation lead by the Minister of Information and Culture, Alhaji Lai Mohammed with some select journalists went on a tour of the facility recently.

He stated that the enabling environment provided by administration of President Muhanmadu Buhari, which birthed the Dangote Refinery and Petrochemical plant, $2.5 billion Dangote Fertilizer Plant, Lekki Deep Sea Port and three more modular refineries to be commissioned before May 2023 in Edo and Bayelsa states amongst others, has put Nigeria on the path of industrial revolution.

Mohammed, who described the refinery as undoubtedly one of the busiest construction sites in the world, said the President of Dangote Group, Alhaji Aliko Dangote is leading Nigeria’s industrial revolution.

According to him, “The coming into being of such massive industrial complexes as the Dangote Fertilizer Company and the Refinery were made possible by the enabling environment provided by the administration of President Muhammadu Buhari. Today, new businesses are springing up in all sectors, thanks to a conducive business environment. Under this Administration, the Presidential Enabling Business Environment Council (PEBEC) has implemented over 150 reforms, moving Nigeria up 39 places on the World Bank Doing Business index since 2016.

“Mr. President also signed the Companies and Allied Matters Act, 2020 (CAMA 2020) – Nigeria’s most significant business legislation in three decades. The result of this favourable business environment is the birth of new businesses such as the $2.5 billion Dangote Fertilizer Plant that will produce 3 million metric tonnes of Urea every year; the 650,000 barrels per day oil refinery due to open later this year; Lekki Deep Sea Port, one of the most modern sea ports in West Africa; BUA’s 3 million metric tonnes cement plant; and the 5,000 barrels per day Modular Refinery in Ibigwe, Imo State, and three more modular refineries to be commissioned before May 2023 in Edo and Bayelsa states just to mention a few.”

“Thanks to the Presidential Fertilizer Initiative launched by President Muhammadu Buhari, indigenous companies like Indorama and Notore – with a combined capacity of over 2.5million tonnes per annum. Yet there was still a fertilizer shortfall. With the coming on stream of the Dangote Fertilizer Plant, Nigeria is now self-sufficient in the production of urea. In fact, Nigeria is now the leading producer of Urea in Africa, “he said.

The Dangote Fertilizer plant, he revealed, is already exporting to the US, India, Brazil, Mexico and Argentina.

He added that the Petroleum Refinery & Petrochemical Plant and the Fertiliser plant will ensure Nigeria’s food and energy security is secured.

“Gentlemen, based on what we have heard here today with regards to the 650,000 barrels per day Dangote Refinery, officially know as The Petroleum Refinery and Petrochemical Plant, the refinery would be a game changer once it comes on stream in terms of employment generation, huge value addition that will contribute to the increase in GDP, conservation of foreign exchange as there will be no more importation of petroleum products, generation of foreign exchange through export of finished product, availability of petroleum products thus ending petrol queues and attract foreign capital investments. The total investments in the fertiliser plant is $2.5 billion while that of the refinery is above $19 billion, “he said.

Speaking, the Executive Director, Strategy Capital Projects and Portfolio Development, Dangote Group, Mr Devakumar Edwin said the philosophy of the investments in the Fertiliser Plant, Petroleum Refinery and the Petrochemicals Plant is to overcome a problem which is several decades old- from the time when colonialists came to Africa to exploit and take out the raw materials and sell the finished products back to the continent.

“Even after the end of the colonial era, we can see how copper, cobalt, iron ore, uranium, diamond, etc. are all exported and the finished products are imported back into the continent. Even the diamonds from South Africa have to be taken to Netherlands or Belgium to cut and polish before being sold back to South Africa.

“In Nigeria, we have been facing a similar problem. We have two major resources – natural gas and crude oil. Our country’s natural gas is liquefied and exported and, finished products such as urea and other petrochemicals are being imported into the country. It is also the same case with the crude oil being exported and the finished products being imported back. As my chairman Alhaji Aliko Dangote often says, “We are exporting employment and importing poverty.” Hence, he decided to add value to these two resources – natural gas and crude oil, within Nigeria, by constructing the Fertiliser Plant and the Petroleum Refinery and Petrochemical Complex, “he said.

He added that the Petroleum Refinery & Petrochemical Plant and the Fertiliser plant will ensure the generation of huge direct and indirect employment.

The facility, he added, will have a huge value addition within the country, thus contributing to the increase in the GDP.

He added, “These two plants will ensure the availability of the highest quality products- all our refined petroleum products will be of Euro V grade, which is the highest quality available in the world today whereas, the petroleum products currently imported are of Afri-III grade or even lower. We used to import prilled urea whereas now we are manufacturing granulated urea which will not agglomerate/cake causing loss of value to the farmers.”

“How will a foreign investor have the courage to come to the country to invest, if they see Nigerians shying away from investing in their own country? We have always been pioneers. Our investment in the sugar refinery brought in two other investors into the sugar refinery business. Our investment in cement encouraged Lafarge to expand and BUA to invest in cement manufacturing. Long back, our investments in flour Mills and Pasta industries brought in many other investors into these industries. The above are a few of the benefits the country will derive, in addition to many other benefits, “he stated.

Speaking specifically on the refinery, he said it is the world’s Largest Single Train Petroleum Refinery with 650,000 barrels per day Petroleum Refining Capacity and 900,000 tonnes per annum Polypropylene plant.

The facility he stated has a 435 Mega Watts Power Plant adding that the refinery is designed to maximise gasoline production – 53 per cent of the production  capacity, compared to most of the refineries in the world which produce 20 per cent  to 25 per cent gasoline.

“We have made huge capital investments to extract maximum value from every barrel of crude which is going in. The petroleum refinery can meet 100 per cent of the requirements of Nigeria, of all the liquid products – Gasoline (PMS), Diesel (AGO), Kerosene (DPK) and Aviation Jet Fuel (Jet A-1). While 60 per cent of the production of this petroleum refinery can meet the entire requirement of Nigeria, the rest 40 per cent will go for export, generating huge amount of foreign exchange, “the Executive Director, Strategy Capital Projects and Portfolio Development said.