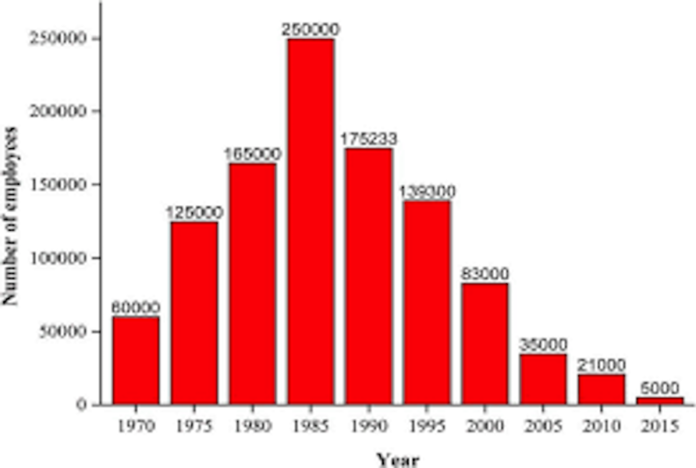 This year marks the 65th anniversary of the establishment of modern textile industry in Nigeria. Dike Onwuamaeze writes on the ups and downs witnessed in the industry

The Late Sarduana of Sokoto and former Premier of Northern Nigeria, Alhaji Sir Ahmadu Bello, established the Kaduna Textile Industry in 1957. It was the first modern textile industry in Nigeria. The establishment of the textile factory was inspired by his visit to Egypt, which opened his eyes to the positive impacts textile sector could have in the economic development of his region and Nigeria in general.

Soon after the commencement of the Kaduna factory, the example was replicated in all the regions in the country, especially the Eastern and Western Regions, resulting in tremendous growth in the industry. The success was so outstanding that in the 1970s and 1980s the textile industry became the highest employer of labour in the country after the federal government.

There were 167 textile mills in the country by 1980s that provided 500,000 direct employments. But 65 years down the line, the fortunes of the once flourishing industrial sector have tumbled and reduced the sector to the unenviable status of the weakest segment of Nigerian industrial sector.

Today, the number has dwindled to about 24 with less than 20,000 workforces. There are also no new investments in the sector for over a decade now. Nigeria is currently a net importer of textile products and relying on importation to meet over 99 per cent of its domestic needs.

The decline is so much that if the late Sarduana should come out from his grave, he would probably ask: do this people know that they needed clothing materials to cover their nakedness?

The Director General of the Nigerian Textile Manufacturers Association (NTMA), Mr. Hamman Kwajafa, attributed the decline to outright counterfeiting of textile fabrics that were produced in Nigeria, Nigeria’s porous borders that allowed massive smuggling of textile materials to thrive and Nigerians taste for foreign textiles.

To checkmate the importation and curb citizens’ taste for foreign products, the federal government banned the importation of textiles into the country in the 1990s and later lifted the ban after few years to “promote competition.”

Kwajafa told THISDAY that, “what brought about all this was the fact that smugglers came in. Some out rightly counterfeited our products and have them cyclostyled in China and smuggled back to Nigeria in millions of meters and sell them at prices that are cheaper than our local products. You can get five yards of these smuggled fabrics at N1,000 in our markets. No Nigerian textile mill can produce at that price. This led to people thinking that local products are inferior not knowing that they are buying counterfeited products. They couldn’t differentiate the locally manufactured textile and the counterfeited ones.

“Our problems also come from regulatory agencies. Goods come in easily through the borders because of the manual operations and nobody is questioning them.”

He said that the textile industry has become the weeping boy of Nigerian industrial sector because, “we are not able to sell our products in Nigerian domestic market and we cannot also export. Most manufacturers have the intention of exporting their products but cannot do so because of high cost of production. Our overhead cost is very high. Because of this we cannot sell at the rate smugglers are selling. We cannot break even. It seems we are in charity business. But smugglers are coming in. They do not pay workers, taxes, power etc. That is why they can sell cheaper. But we bear these costs and still have problem with patronage.”

However, a knowledgeable source in the sector told THISDAY that the major problem of the Nigerian industrial sector stemmed from the fact that the sector is still running on outdated, if not archaic and antiquated, technologies that were foisted from India and Indonesia by Indian businessmen that once dominated the industry.

The source who spoke anonymously stated that the poor technological level in the sector is the major reason it could not produce materials that could compete with imported cloths.

“The key thing is the technology they deployed to Nigeria that is very old and had been phased out in India and Indonesia. We do not have local tech to manufacture textiles.

“Now it is required that some heavyweight investors like the Africa’s Richest Man, Mr. Aliko Dangote, should step in to recapitalise the sector and bring in modern technology needed to scale up the sector and return it to profitability. If we can produce the base material here in a quality that can compete, everyone will buy it and it will give opportunity for our fashion designers to thrive and schools to patronise them for uniforms.

“It needs serious recapitalisation to bringing in modern technology. Though I saw modern ones coming up in Kano but it is for wool. They even have their own energy generation through gas but they are producing for export and not for Nigerian markets, ”he said.

The source stated that the time is ripe for the government to view the state of the textile industry as a matter of urgent national interest that warrants the declaration of a state of emergency.

He said: “Any country that is as big as Nigeria that does not have its textile industry is not secured. What will happen if the country we depend on declares economic blockade on us, what happens? We will all be naked.

However, the President of NTMA, Mr. Folorunsho Daniyan, has debunked the claim that the sector is running on archaic technology even though he agreed that the sector is in a dire straight. He told THISDAY that the Central Bank of Nigeria’s interventions through the Bank of Industry have enabled existing operators in the industry to retool and upgrade their factories and textile mills. He said: “The future of the Nigerian textile industry depends on the will power of the government to protect it. The potentials are here.” This protection will require measures to checkmate smuggling and unwholesome trade practice that are rife in the country’s textile market, including product counterfeiting.

THISDAY investigation revealed that many Nigerians are no longer conscious that there are operational textile mill in Nigeria. A Traditional Creative Textile Designer, Ms. Elizabeth Tayo Falodu, told THISDAY that she relied on imported materials for her local “adire” designs.

She said: “There is no local manufacturer that deals in cotton fabric. I use 100 per cent cotton.  What I understand is that our cotton is exported to China for processing and brought back to Nigeria as a fabric. That is what we buy to produce our textiles. Even the local manufacturers buy imported materials. The only thing the do is to print the fabric while we produce ours manually with our hands.”

When THISDAY asked her if she is aware that textile manufacturing firms operate in Nigeria, her answer was: “No. I don’t. I will even want to have their contacts because it may be cheaper sourcing materials from them.” That is.

A Senior Lecturer in Industrial Design Department, School of Art, Design and Printing of Yaba College of Technology, Dr. Adeyemo Bolaji, shared his views on the state of textile industry in Nigeria with THISDAY.  Bolaji believed that industry would one day bounce back to its glorious years if the government should focus more on the industry and do more to salvage it.

“My view about Nigeria textile industry is that it will still go back to its normal good days. But the situation we are in today is not palatable to anybody including the academia, the so called tailors and the industry. The technology the Chinese are bringing in is too advanced to be compared to Nigeria. Advanced technology has made Chinese one of the highest employer in the textile industry,” he said.

He recalled that there used to be tax rebates and interest free loans to textile industry. “The last time I went to a certain textile mill, I was told that it spends billions of Naira on electricity alone and that it cannot compete with textile from China,” he said, adding that the government should reactivate the sector because of its potentials to provide jobs in the economy.

Bolaji said: “It is a labour intensive industry. We are just talking about creating jobs for youths. But there is no way we can achieve this without reviving the textile industry. Even our graduates have nowhere to work. We are just preaching that they will be self-reliance without providing them with capital.

“Where is the capital grant for these graduates to be able to work? It is a capital intensive industry. Before now we are buying woven material brocade for N3,000 it is now N9,000. And 99 per cent of brocade is coming from China. Before, it was produced in Nigeria, but high cost of production is major challenges that the textile industry is facing.”

He underscored the strategic significance of textile industry thus: “If you do not eat nobody will know. But if you do not wear cloth everybody will say you are mad. You will not be eating and sitting in your house. You still need to look decent to go out and that is clothing. So, government is trying but it has to do more.”

The federal government has said that it is aware of its responsibility to grow the textile industry again.

The Minister of Industry, Trade and Investment, Mr. Niyi Adebayo, told THISDAY recently that the “we are working with the CBN to provide specific interventions such as machinery and equipment and have instituted a seedling program that will enable the provision of cotton seeds to farmers. We are also addressing competitiveness of the sector by working with the Honourable Minister of State for Petroleum Resources to reduce the cost of gas, which is a key cost component of the textile industry.”

However, like the proverbial Oliver Twist, the operators of the textile industry are hoping that more would come from the government to rescue the industry.