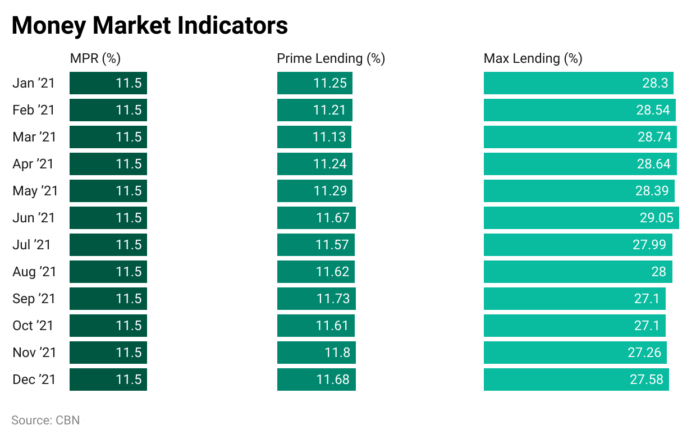 Following increased lending to corporates, individuals and high-yield environment, a total of 10 commercial banks reported a 19.4 per cent increase on interest income generated from loans & advances to customers in 2021.

Analysis of the banks audited report for period ended December 32, 2021 indicated that the 10 banks generated N1.99 trillion interest income from loans & advances in 2021 as against N1.66 trillion reported in 2020.

In the last few years, stronger banks in Nigeria with increasing loans and advances to customers are reaping interest income from lending to corporate and individuals.

This is coming amid the Central Bank of Nigeria (CBN) retaining its Monetary Policy Rate (MPR) at 11.5 per cent in 2021.

As gathered by THISDAY, average prime lending and max lending rates was at 11.48 per cent and 28,06 per cent in 2021, respectively.

Data by the CBN, on banks’ lending interest rates showed a 0.72 percentage points decline in the maximum lending rate to 27.58 per cent in December from 28.3 January 2021.

According to report, banks in 2021 were charging an average interest rate of between four per cent and 36 per cent on loans given to customers in various sectors of the economy, especially agriculture and forestry, manufacturing and education.

According to the Banking System Stability Review Report (BSSRR), presented by CBN, the operating cost to income ratio of banks rose to 73.1 per cent in 2021 from 68.2 per cent in 2020, driven by the impact of rising inflation and higher AMCON charge.

Applicable rates for each of the commercial banks as of April 9, 2021, showed that Stanbic IBTC Bank charged the lowest rate on loans at four per cent, followed by GTCO at 5 per cent.  Fidelity Bank charged six per cent, UBA seven per cent and Wema Bank nine per cent.

The banks that charge higher in the prime-lending category include ETI, 23 per cent and UBA, 20 per cent.

Analysts have expressed that commercial banks might review lending rate, which some have adopted lending to a single interest rate to individual customers to meet the CBN’s LDR policy.

Commenting, analyst at PAC Holdings, Mr. Wole Adeyeye said: “banks are going to face challenges in interest income generated from loans to customers. The licensing of PSP to MTN Nigeria and Airtel Africa going to pose a threat but banks with effective management understand the banks have been coping with the Fintech companies and trying to improve lending to customers through App USSD, among other devices.”

On his part, the Vice President, Highcap Securities Limited, Mr. David Adnori expressed that bank customers’ have to decide where to borrow from with alternatives provided by Fintech and PSP operators.

He maintained that banks are always prudent in managing interest income generated from loans and customers and are expected to thrive amid challenges posed by Fintech companies, among others.

However, analyst at Vetiva Research believed that tough times still lie ahead for the banks, with interest rates poised to recover slowly, while inflationary pressures remain.

The analysts added that competition from the new Payment Service Bank (PSB) licences issued to MTN Nigeria and Airtel pose a threat to some lines of the banks’ businesses.

“Next year, we expect interest rates to remain in a steady upward trajectory, as government borrowing continues to rise to fund an ever-expanding deficit. However, we do expect inflation to continue to outpace this rise, meaning negative real returns for investors in the market, ”said banking analyst at Vetiva, Joshua Odebisi.