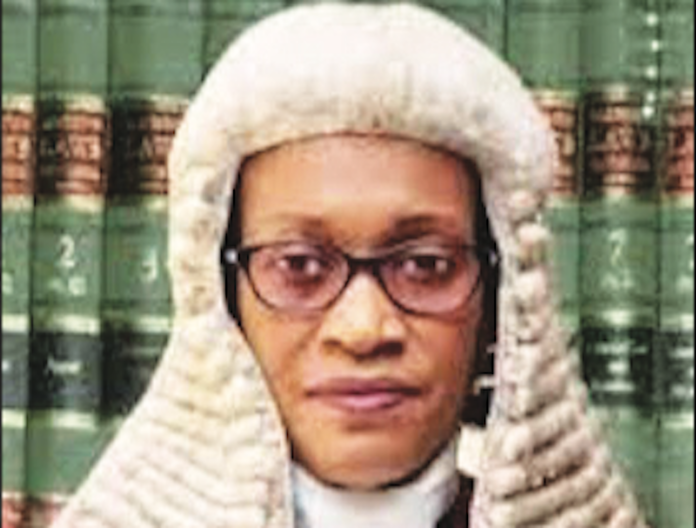 In the Supreme Court of Nigeria Holden at Abuja On Friday, the 14th day of January, 2022

(Lead Judgement delivered by Honourable Helen Moronkeji Ogunwumiju, JSC)
Facts
The Appellant and a certain Suraju Olanrewaju were charged before the High Court of Osun State on a 3-count Charge of conspiracy, indecent assault and murder of one Bilikisu contrary to Sections 324, 319(1) and 360 of the Criminal Code Laws of Osun State. It was alleged that the Appellant and the said Suraju Olanrewaju and another Fatai Ademola, were co-occupants in a room at Oke Abesu, Osogbo. The deceased Bilikisu, who was Fatai Ademola’s girlfriend, had visited him and after they both had sexual intercourse, he slept off. Thereafter, the Appellant and Suraju Olanrewaju took turns to forcefully have sexual intercourse with Bilikisu despite serious opposition from her. In order to prevent her from shouting for help while they were savagely having intercourse with her, they decided to block her mouth with a loaf of bread and this led to her suffocation and eventual death.
The Appellant and the co-accused person pleaded not guilty, and the case proceeded to trial. At the end of the trial, the court convicted them for murder and sentenced them to death by hanging. In its judgement, the trial court held that the confessional statements of the accused persons in which they admitted that they both had sexual intercourse with the deceased serially, and stuffed her mouth with bread to prevent her from shouting for help, established that they conspired to rape the deceased. The trial court further held that their confessional statements revealed that they tried to resuscitate the deceased by pouring water on her when they noticed she was unresponsive, which fact established that the deceased died in the process.
Dissatisfied with the judgement of the trial court, the Appellant appealed to the Court of Appeal. The pith of the Appellant’s grievance was that he was not provided with an interpreter to interpret English Language to Yoruba Language for him, during the arraignment and throughout the proceedings. The Court of Appeal dismissed the appeal. Further dissatisfied, the Appellant filed an appeal to the Supreme Court.

The Supreme Court determined the appeal on the basis of the following narrow issue:
Whether the arraignment of the Appellant violated Section 36(6)(a) and (e) of the Constitution of the Federal Republic of Nigeria, 1999 (as amended) and Section 215 of the Criminal Procedure Act.

Responding, counsel for the Respondent prefaced his argument with the submission that the death of the deceased was not in doubt, and the fact that the Appellant and his co-accused caused her death by suffocation when they blocked her mouth with bread to prevent her from shouting to attract people to her aid while raping her, was not contested. The confessional statements before the trial court confirmed the above, and the evidence of the Prosecution witnesses were also relevant. Reacting to the submission about the validity of the arraignment, counsel argued that the core of a valid arraignment is the understanding of the Charge by an accused person before he is called upon to make his plea to the charge, and in determining the validity of an arraignment, the circumstance of each case must be considered. Counsel contended that the arraignment of the Appellant having been done in the presence of the Appellant’s counsel without any objection to the name or designation of the interpreter, showed that the Charge was read and interpreted to the Appellant before he pleaded to same. He argued further that the presence of Appellant’s counsel on record, before the trial court at the arraignment and throughout the proceedings acceded to the fact without any objection whatsoever, as the interpretation was provided by the clerk of the court who interpreted the proceedings throughout the course of the trial. The Appellant did not also complain of not understanding the proceedings, throughout the trial.

In its decision, the Apex Court held that by the provisions of Section 36(6)(a) & (e) of the Constitution of the Federal Republic of Nigeria 1999 and Section 215 of the Criminal Procedure Act, it is required that a Defendant shall be informed in the language he understands, the nature of the offence against him. He is also entitled to an interpreter without payment, if he does not understand the language of the court. However, in determining the validity of an arraignment, it is important to look into the circumstance of each case. In respect of the proper application of Section 215 of the Criminal Procedure Act, where there is evidence on record that the Charge was read to an accused person in the presence of counsel, particularly in a charge carrying the death penalty, the arraignment will be proper and subsequent proceedings will be said to be properly conducted if there is a counsel for the Defendant throughout the proceedings. What is important is that, the Defendant and his counsel are not misled regarding the details of the criminal offences on which the Defendant has been indicted. It is also important that the details of the evidence adduced in court during the trial are clear to the Defendant and his counsel, so that the Defendant can make a full defence to the Charge. In all these circumstances, there is a presumption in favour of regularity in that the Judge would instruct and ensure that throughout the proceedings, the counsel and the Defendant would understand the proceedings even where the details of such directions by the trial Judge are not fully and specifically stated on each date of arraignment.

The court relied on its decision in OLABODE v THE STATE (2009) 11 NWLR (Pt. 1152) 279 at 254 that although reflection in the trial court’s record who read and explained the charge to the accused person form part of the procedure a trial court should adhere to while arraigning an accused person, failure or omission by the trial court to reflect them is not fatal to the proceeding once the arraignment was carried out in a manner which is substantially regular.

Their Lordships held further that the constitutional duty of the trial court to ensure that an interpreter is provided for the Defendant during the whole proceedings, is immutable. What however, is not set in stone, and what will not vitiate a trial, is the omission of the trial court to state on the record on each date of the proceedings at trial, the fact of the presence of an interpreter and the name of the said interpreter. Relying on the decision in FRN v MUHAMMED YA’U (2014) 3 SCNJ 53 at 86, the Supreme Court held that it was manifest from the record that the trial court appreciated the mandatory procedure for a valid arraignment. This was depicted by the interpretation of the Charge to the Appellant in Yoruba Language, before his plea was taken. The records also showed that the Appellant’s counsel were present throughout the arraignment, and none of them complained about the arraignment or entire proceedings. There is, therefore, a clear presumption of regularity of the proceedings – OGUNYE v THE STATE (1999) 5 NWLR (Pt. 604) 548 and OKEKE v THE STATE (2003) 15 NWLR (Pt. 842) 25.

Yemi Adesina for the Respondent.

2023 AND THE DELUGE OF ASPIRANTS