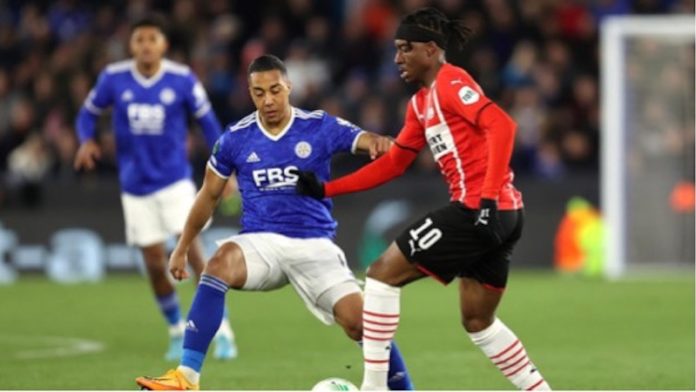 With Wilfred Ndidi, Kelechi Iheanacho and Ademola Lookman already making waves at the King Power Stadium, Leicester City may welcome another Nigerian to their fold after Brendan Rodgers was reported to be eyeing

Noni Madueke for a summer move to the Leicestershire County

Leicester City have expressed their interested in the services of PSV Nigeria-eligible winger, Noni Madueke.

The 20-year-old England U-21 international has been impressive since joining the Dutch giants from Tottenham Academy in 2018.

He has contributed 14 goals in 30 games this season across all competitions and is impressing at the Phillips Stadium.

Leicester had ample opportunity to take another look at the winger when the Foxes hosted the Eredivisie campaigners in the Europa Conference League quarterfinals on Thursday.

Leicester City head coach, Brendan Rodgers is also a huge fan of the winger and sang his praises ahead of their game at the King Power Stadium.

He came through the system over here but clearly felt he wanted to play first-team football and maybe there was that opportunity abroad. You’ve seen other young players do that, going into Germany and into Holland.

“He’s a talented player, he’s physically very good, he’s got a nice left foot, he’s dynamic, he wants to run in behind, so he’s a threat. I know he plays with Luke Thomas in the Under-21s. He’ll be a threat I’m sure.”

Madueke is yet to represent England or any country at the senior level but is eligible to represent Nigeria and the Three Lions.

He was born in the UK to Nigerian parents.

When asked by Sky Sports to sum up his game, he said, “I am a bit of a showman. I try to beat players. I am fast. I have an eye for goal. That is how I would describe myself.”

This is not cockiness. He is humble but confident, and that confidence is justified. The 20-year-old Londoner has been a huge success since leaving Tottenham for PSV over three years ago – rejecting the chance to go to Manchester United.

Madueke was back in England for his first professional game against English opposition when PSV face Leicester City in the Europa Conference League quarter-final on Thursday. It is just the next experience for one of the bright young talents of English football.

These are the occasions that persuaded him to move to Eindhoven in the first place. He has made over 60 appearances for the 1988 European Cup winners since making his debut over two years ago. The justification for his bold choice is obvious.

“I have been in a first-team environment since I was 17,” he says.

“I don’t think there is any way I would have experienced first-team football at that age in England. That is the main thing. I just liked the aura of the club. From the moment I came here, I liked the aura straight away. It just felt like the right next step.”

The standout moment so far came in August when he scored twice in a 4-0 thrashing of Ajax in the Dutch Super Cup. It was a man-of-the-match performance. “That was the highlight of my years here. It was the first trophy that I have won in my professional career.”

The first of many? There seems no doubt. There is a steely pragmatism to Madueke. He does not romanticise his move abroad, instead downplaying the significance of a young man living on his own in another country. He is doing what he must do to succeed.

Asked if it was a challenge for him to leave home at such a young age, he is clear. “Off the pitch, not really. I think if I were in England it would be pretty much the same. Moving abroad when you are young, it takes a bit of heart. Other than that, it is no different.

“I have definitely seen another side of life and had to adapt. There was a culture shift. But I am someone who is easy-going and can live anywhere so it was not so difficult. I live by myself but I see my family quite frequently. Everyone speaks English so it is pretty easy.

“I feel like I was just coming here for a job, to get the job done. It was a move for my career so I was just thinking of making the best out of it. I was not really worried about leaving London or anything like that. I just knew. I was focused. I wanted to do the job.”

His first season was spent with the development team, working under Ruud van Nistelrooy, honing his craft under the former Manchester United striker. “He is a legend of the game so it was an honour and he is still a great finisher. He helped me a lot with that.”

The breakthrough came last season when he was PSV’s third-highest scorer in the Eredivisie with seven goals despite starting only seven of the team’s 34 matches. Roger Schmidt, the club’s experienced coach, taught him another side of the game.

“He has helped me with my out-of-possession work, pressing and being connected to the other players on the pitch so I can win the ball back as quickly as possible. Two years on, I am a bit more polished in my game. That is the difference now.

“When you are 18 coming into the first team you are a bit raw. I am probably a more decisive player than I was two years ago. My biggest strengths are still my speed and my dribbling but I would say that my end product is good as well now.”

Even so, it has not been straightforward since that day against Ajax. Madueke missed much of the winter through injury. “It was difficult but now I am over it and I have been able to play the second half of the season with pretty much no problems,” he says.

In particular, he caught the eye in both games for the England U21 side last month.

“It has definitely been a progressive year.”

That was decisive against Leicester on Thursday where his father and brother were at the King Power Stadium but – typically – the player himself has laser-like focus.

“It is definitely a big game. I am coming back home. It is my first game against an English team. It will be another experience but I just see it as another game we have to win.

“Leicester are a good team. But so are we,” he said before the encounter with the Foxes.

Rodgers’ team are just one of the Premier League clubs that have been linked with a move for him in the summer. It is only a matter of time before he returns to England. “I definitely want to play there next.” He just does not know yet when that will be.

“Whether it is this summer or whenever it is, for now, I am focusing on the rest of the season. It is definitely an ambition of mine to play there. I have had a kickstart in my career by playing a lot of games at a young age. I feel like I will be ready for any step I take.”

There is that confidence. He just needed the opportunity. 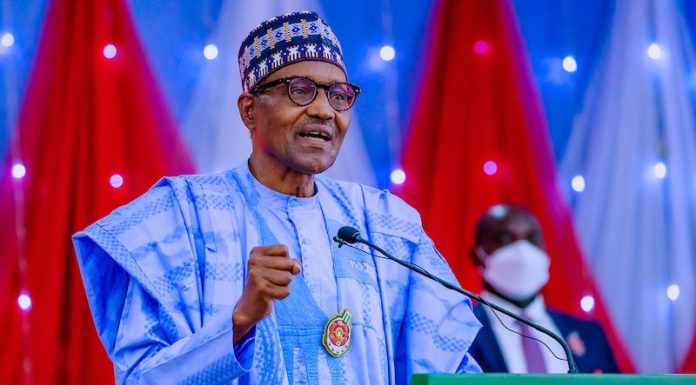