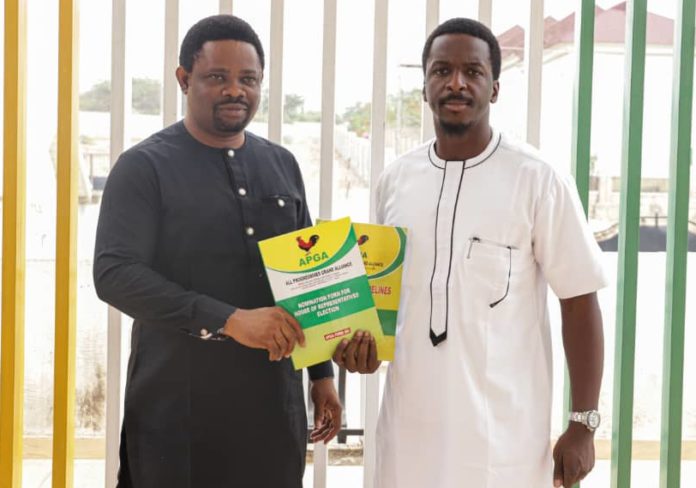 One of strong contestants of Idemili North/South Federal Constituency position in Anambra State, Hon Uche Harris Okonkwo has promised a reformed Representation when elected member of the House of Representatives come 2023.

Okonkwo, who disclosed this after purchasing his nomination and expression of interest form to contest the election under the platform of All Progressive Grand Alliance (APGA).

Okonkwo’s desire to contest the election came after several calls by Youths Expression for Service (YES). According to the the group comprises of young Nigerians in Nigeria and in Diaspora, Idemili North/South is in bad shape because the youths stayed away from the nation’s political environment.

Meanwhile, the Youths Expression for Service had raised and donated a wopping sum of 2,000,000 (two million naira) as their support to ensure Hon Uche Harris Okonkwo contest the 2023 House of Representatives election.

The group was established to encourage quality people to get involved in leadership positions.

Speaking with newsmen at the APGA National Headquarters in Abuja, Okonkwo said the constituency need a fresh representation for the constituents to experience something new.

“The fact can speak for itself, everybody is free to go and do their research in terms of what the current lawmaker has done and what he has not done. Am not here to bite on his form of leadership, but I believe that at a certain point, he has been there for quite a while and at certain point, it is good for us to experience something new, something fresh”.

According to Okonkwo, the core of his legislative interest would be to carve out laws that would favour everybody including those within his constituency.

“Basically, when you are at the federal House of Representatives, you are a legislator, you have to be able to carve out according to the laws and acts of the federal republic of Nigeria. You carve out laws that would favour everybody including those within your constituency.

“One of my priorities would be the youths, to get a front role experience into politics and the women too would be heard.”

On what motivated him to seek for the ticket of the party to represent Idemili North/Idemili south, Okonkwo said: “one of my motivation is that of the youth, those that are yearning for good representation and ideal leadership. My constituency, Idemili North and South has been triggered by quite unfortunate leadership in the past. But we want to have an impact, create change and have better representation at the federal level and that formed the reason why am seeking for representation.

“For us, Nigerians need to be able to feel and experience someone that can be able to bring vision, kind-hearted and firm when it come to standing on security, empowerment, women equality, child Justice, social economy and the business economy at large,” Okonkwo added.