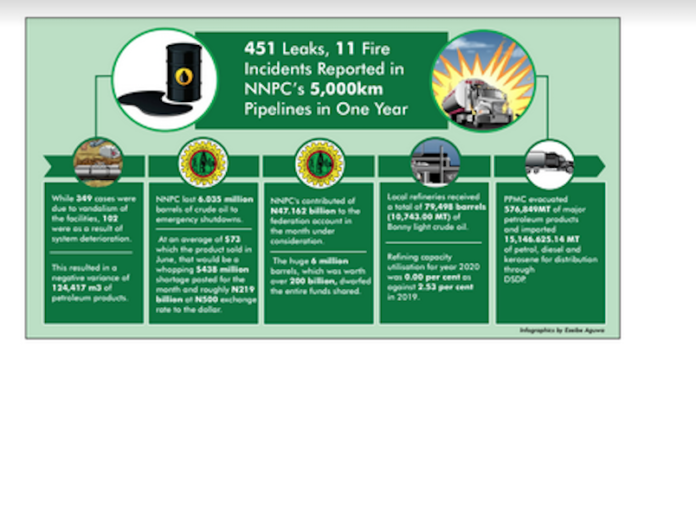 The federal government and its partners in the oil and gas industry recorded a huge slump in crude oil losses in the January/February production circle, a THISDAY review of industry data has shown.

Although, during the period under review, Shell Petroleum Development Company (SPDC) declared a force majeure in one of its facilities, the new data released by the Nigerian National Petroleum Company (NNPC) Plc, indicated that it’s the least loss for the nation in months.

Nigeria has for months been unable to meet the production quota allocated to it by the Organisation of Petroleum Exporting Countries (OPEC) due to losses to vandalism and outright sabotage as well as community issues.

The menace has further impacted on government institutions as well as individual operators who have recently raised the alarm over the humongous losses the nation and private entities are being subjected to.

Earlier, Governor of the Central Bank of Nigeria (CBN), Godwin Emefiele, who spoke at the end of the 284th monetary policy committee (MPC) meeting in Abuja, blamed the trend of oil theft for the inability of Nigeria to meet its oil production quota.

Describing the situation as unprecedented, he stated that the occurrence has had a debilitating effect on government revenue and accretion to reserves, adding that the global prices have gone up and are compounded by the shortage of supply of petroleum products.

Similarly, the association of indigenous exploration and production companies, the Independent Petroleum Producers Group (IPPG), recently put it succinctly when it described the occurrence as an “existential threat.”

Chairman, IPPG, Mr Abdulrasaq Isa, speaking a fortnight ago at the 5th Nigeria International Energy Summit (NIES), said that the challenge should be tackled before it finally kills the sector.

Similarly, a Co-founder and former Chief Executive Officer of Seplat Energy Plc, Mr Austin Avuru called for a state of emergency in the Nigerian oil and gas sector, revealing that up to 80 per cent of oil pumped in the country, particularly in the East, is stolen.

Avuru’s comments came days after a businessman and Chairman Heirs Holdings, Mr Tony Elumelu, in the same vein, bemoaned the worsening state of the industry, stressing that about 95 per cent of oil production does not get to the terminal.

But the new information made available from the NNPC presentation to the Federation Account Allocation Committee (FAAC), this month, showed that the latest losses occurred in nine incidents.

While SPDC declared force Majeure, due to a serious incident, involving jack up barge, the report stated that the community crisis continued in south swamp resulting in loss of production of 9,000 barrels per day.

Excravos experienced a flow line damage resulting to a loss of about 1,700 barrel per day while Odudu and Ima were also shut in during the period due to maintenance work.

Also, sabotage was recorded at the Tebidada and Ogbaibiri flow stations while the NNPC said funding was a challenge for the Jones creek production leading to the disruption of operations as a result of non-payment of workers, while Aje was also shut down.

Last month, Nigeria recorded its highest single-month crude oil loss in a long time, as a result of disruptions due to maintenance, community issues and force majeure at the Forcados terminal.

Although the interruptions mainly occurred in December last year, it reverberated in the January activities of the Nigerian National Petroleum Company (NNPC), during which the firm was unable to contribute anything to the Federation Account.

In a document in which the national oil company explained its operations to the FAAC, it told the body that the nation lost 7.503 million barrels during the month, in eight major incidents.

Nigeria’s upstream petroleum sector has struggled in the last one year, due to deteriorating facilities occasioned by waning investment as well as oil theft, sabotage and community issues.

With an average oil price for the month of January hovering at around $90, it is estimated that the country may have lost as much as $675 million to the phenomena during the period under review.

Recently, THISDAY reported that a combination of huge oil pipeline repair cost and high-level theft of crude oil was bleeding out the Nigerian economy, with losses amounting to at least $29 billion in the last six years, spanning between 2015 and 2021.

In February 2021, the NNPC Limited had said the country lost an average of 200,000 barrels per day of its crude oil production to saboteurs and illegal pilfering by criminals.

Last Friday, THISDAY reported that for the second month running, NNPC failed to remit its statutory funding of the Federation Account, a joint pool collectively operated by the federal, state and local governments in February.

The situation portrays a deepening inability of the national oil company to meet its obligations to its biggest stakeholder, the federation, with the planned N328 billion deduction scheduled for next month, arguably the highest since it began the payment of petrol subsidy.

Available data indicated that it had so far exceeded its subsidy budget by N356.3 billion to hit N430.165 billion in January and February.

Whereas the NNPC was supposed to have paid the federation about N351.9 billion this year, it had only succeeded in remitting zero naira to the three tiers of government at February, according to the March presentation.

It also did not fund many of its hitherto mandatory cost centres, during the month under review, including the non-functional refineries, which it spends close to N10 billion on every month, the Nigeria/Morocco pipeline, frontier exploration services, among others.

Despite the rising international prices of oil, in January also, the NNPC in the same manner failed to remit its usual funding to the joint account.

This would be the third time in less than a year that the company would be unable to deliver a kobo to the joint account, following the same occurrence in April last year, when the firm announced zero remittance for the month.