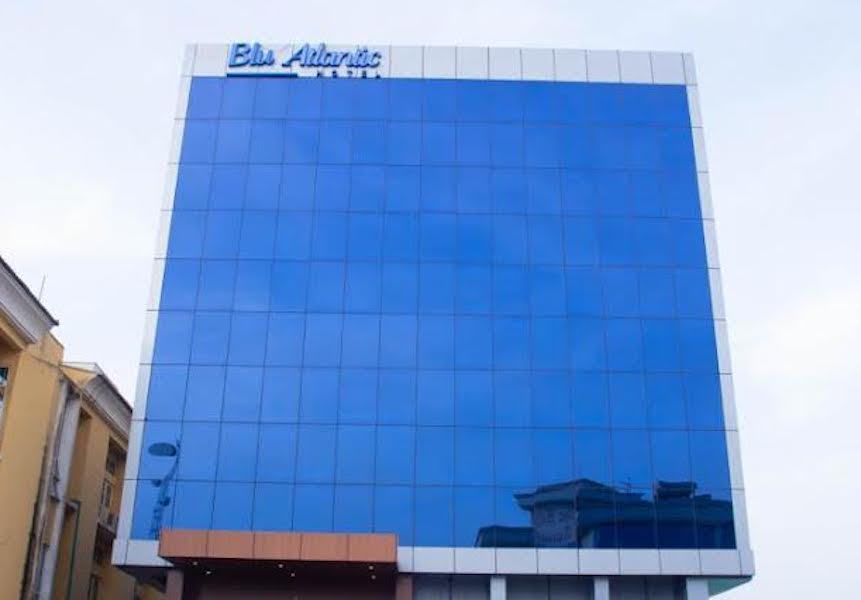 Experts in hospitality real estate have determined that most investors who succeed at it are driven by undiluted passion and not by the depth of their money bags. An eye for fine details, more than just cash makes a huge difference even among 7-star-rated hotels, water parks and resorts.

The Blu Atlantic Hotel was conceived and built on the principle of getting the fine details right for the comfort and convenience of everyone, particularly that of the guests.

Blu Atlantic, which took its name from the Aquatic Splendor that Lagos is renowned for, is built on over 1,600sqms of prime land on The Rock Drive, the Business Bay of Lekki Phase 1, Lagos. The hotel is right next to some equally sturdy establishments like The Rock Tower, IMAX and the upcoming training facility of the NDIC.

The facility has an interesting flow to it, right from the entrance that opens up to its parking space and to the front desk that is accessible by means of either the steps or a ramp for the physically challenged on wheelchairs. The glass door glides open as the visitor approaches the reception area, on the right of which is the restaurant and bar that can seat 50 diners. There is an external bar that can be accessed from the car park.

The Blu Atlantic building, which rises to five floors, is energy efficient. The key cards control room lighting and all lights are energy-saving. Transportation up the five floors is by beautifully designed elevator with voice prompt. There is a staircase that can also be used, particularly during emergencies. The first floor has a conference room that can seat 25 people.

There are 48 soundproof rooms, including the double volume suites, and complete with large beds that look therapeutic- relaxing. Each floor has the same room-type.

The Managing Director of Blu Atlantic, Mr. Gozie Nwachukwu, who performed a tour of the pristine facility at the weekend, definitely did all that was necessary to make a remarkable difference in hotel experience in Nigeria’s hospitality industry. He had this vision when he was a lot younger and decided to actualise it when he knew the time was ripe.

But first, Mr. Nwachukwu decided to review his experience in the hotels he stayed in both within and outside Nigeria and to incorporate the ideas he liked best.

“I’ve been to hotels where there were complaints from people and I thought to myself that maybe I should build a place I’d like to stay. So, that was how the idea came up.” He had an option of building his ideal facility either in Calabar or Lagos, but chose the latter because he lived in Lagos.

In all of this, his interest was to develop a good quality establishment. “One thing that was very important to me was the quality of what we are bringing into the industry,” saying he had seen some ugliness in some hotels that made him “take caution from day one. We brought in reputed architects and foreign partners to do the construction. It took us three years and a few months to complete the construction of the hotel,” which was open for use in December 2021.

Another niche he wants to focus on is service. “Service is very important. As they do in Ritz Carlton, when you ask for the restroom, they don’t point at it, they take you there. That type of service culture is what I want to bring into this place. Arriving guests can check in inside their rooms instead of waiting at the reception. The same with food and other services in the rooms. It’s all about comfort and convenience. These are the things that inspired me.”

He said they are positioning Blu Atlantic as a “business hotel” with “2022-model facilities. It’s not only in cars that you have year models, we also have it in construction. The lighting, switches and others are modern and we went as far as making our walls soundproof. The walls of the hotel, including that of the rooms, are also finished with fibre wood which is fire and heat resistant.” Also, every floor has fire hydrant lines, cylinders and hoses and the hotel is fitted with smoke detectors, fire alarm and water sprinklers.

Security is topmost at Blu Atlantic, as every inch of the building, including the public areas within and outside, is monitored with CCTV.

There is good use of glass in the construction of Blu Atlantic, and Nwachukwu said “The glass facade outside (great blue wall) has to do with the corporate image we want to build. The glass is also insulated, soundproof, tampered as well.”

The water treatment machinery is top of the range, he said. “We understand the water situation in Lekki, so in addition to doing an industrial borehole which goes 250 metres down, we also invested a lot in good water treatment. It is very big and robust and the water we get in the hotel is drinkable.

“Also, our waste treatment facility is a 2021-model. It is one of the best in the industry and it is under where these cars are parked (pointing at the car park). It’s eco-friendly, biodigest. It’s not powered by electricity but runs on its own digest and generates gas that can be used to cook. We piped it to our kitchen, even though we don’t use it all the time. It’s gas that can be used for cooking.”

Nwachukwu said the hotel was built and equipped through venture capital and credible investors who liked the plan and trusted the promoter. “They saw the prospect, and they knew it’s going to be a lucrative one and they invested. What it also means is we have a lot of people on our board, people of different works of life, you know, not really people who‘re into hospitality. They‘re also passionate about sustaining the brand and about growing the brand. So yes, personal funding came in. We also had other investors, it didn’t come from the bank.”