THE BITTER TRUTH PDP MUST BE TOLD  43 mins ago

Contrary to Joe Igbokwe, Tinubu did not Meet with Wike in Paris 1 hour ago

THE BITTER TRUTH PDP MUST BE TOLD

Contrary to Joe Igbokwe, Tinubu did not Meet with Wike in Paris 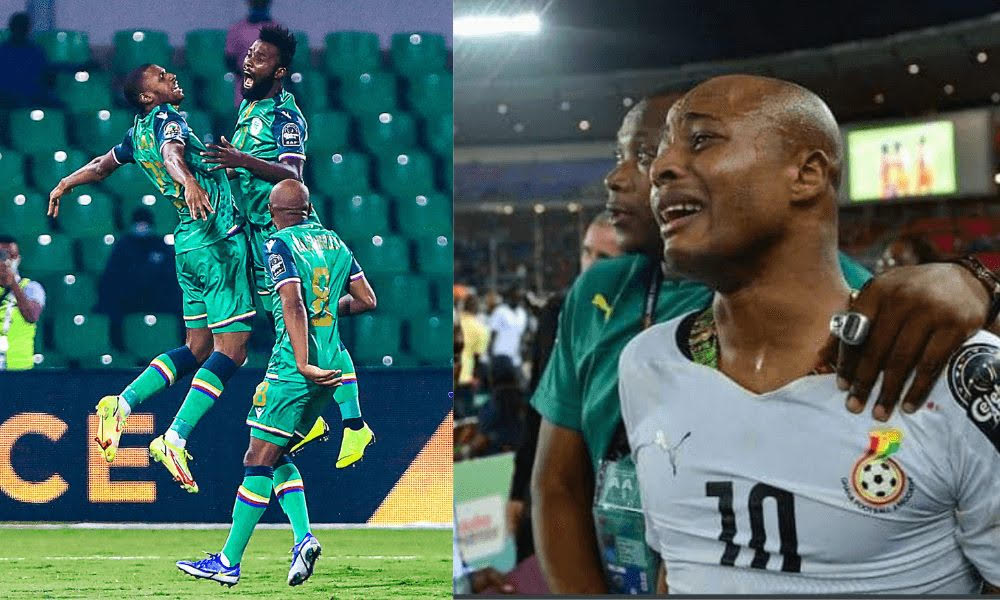 Ghana’s Black Stars suffered a humiliating group-stage exit at the Africa Cup of Nations after the four-time champions were beaten 3-2 by debutants Comoros.

El Fardou Ben Nabouhane put the islanders ahead early on, and Ghana then went down to 10 men when Andre Ayew was shown a straight red card.

Ahmed Mogni doubled the lead before the Black Stars fought back to make it 2-2.

However, Mogni tapped in his second in the 85th minute to inflict Ghana’s first group-stage exit since 2006.

The result will go down as one of the biggest shocks in Nations Cup history as Comoros scored at the finals for the first time and then went on to record their maiden victory.

Incredibly, the side ranked 132nd in the world now have a chance to reach the knockout stages as one of four best-ranked third-placed sides.

*From Eaglets to Super Eagles

Ahead of last Group D match in Garoua against Guinea Bissau, five members of the Super Eagles at AFCON 2021 represent what progression in any developmental system should look like. Five players of the national team namely; Kenneth Omeruo (2009), Kelechi Iheanacho (2013), Taiwo Awoniyi (2013), Samuel Chukwueze (2015) and Kelechi Nwakali (2015) all graduated from playing for Golden Eaglets at FIFA U-17 tournament to the national team.

After last Sunday’s ‘football evangelism’ when CAF Boss, Dr. Patrice Motsepe, made a donation on behalf of his Foundation to a Catholic church in Yaounde, the business magnate yesterday visited about 50 Nigerian girls from the Minawao refugee camp from the far northern part of Cameroon.

The girls who are part of the football time at Minawao camp, watched Nigeria/ Sudan and Egypt/Guinea-Bissau matches and got an opportunity to see some of their heroes in action.

The event itself was courtesy of a partnership between CAF and UNHCR, an Agency of the United Nations Refugee Agency that aims to use football – Africa’s most powerful platform and prime entertainment – to bring hope to the continent and vulnerable people.

*Algeria Obeying the Law of Gravity!

What goes up, must come down and that seems to be the statures of The Fennecs of Algeria after losing their unbeaten run last Sunday to Equatorial Guinea. It is a popular saying that ‘All good things come to an end one day’ but it seems too early should the defending champions get thrown out of the tournament at the group stage.

Before Sunday’s shock defeat by Equatorial Guinea, the Fennecs last lost a match in October 2018 — a 1-0 reverse fixture against Benin in an Africa Cup of Nations qualifier — over the subsequent three and a bit year, they’ve established themselves as the top force in African soccer.

Mohamed Salah and his Egyptian side have a date with history tonight in the face of elimination from the tournament when they play Sudan in the last Group match.

This will be the sixth encounter between the two sides at the Africa Cup of Nations but Egypt hold the upper hand with three wins to Sudan’s one (D1). Their first four meetings took place between 1957 and 1970 whilst their last head-to-head dates back to 2008 with Egypt winning 3-0.

The first ever match in the Africa Cup of Nations was between Egypt and Sudan – it took place on 10th February 1957 in Khartoum, the Sudanese capital. The Pharaohs won 2-1.

*Any Ansu Fati to Play against Super Eagles?

The Super Eagles face Guinea Bissau in a near-dead rubber group match at the ongoing Africa Cup of Nations in Garoua, Cameroon tonight.

Guinea Bissau may not be a big brand in continental football but the country has already found a way into the record books.

When in 2019 Inter Milan crashed out of the UEFA Champions League, it was Barcelona’s Guinea Bissau player, Anssumane Fati that fired in the late winner that gave Barcelona a 2-1 win in San Siro.

The Guinea Bissau-born player whose name is often shortened as Ansu Fati thus became the youngest scorer in the competition’s history.

Following the exit of the charismatic Lionel Messi, Fati is the one offered the iconic number 10 shirt. He plays as a left winger for Barcelona. Though born in Guinea-Bissau, Fati represents Spain internationally.