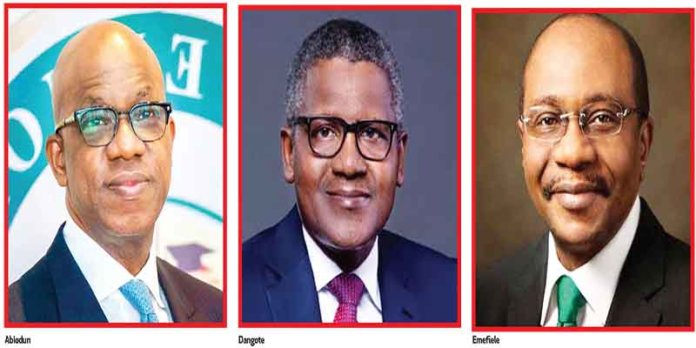 The Governor Dapo Abiodun-led administration in Ogun State is putting in place an avalanche of infrastructural projects that will make the state attract more industries from Lagos due to its proximity, James Sowole writes

The administration of Prince Dapo Abiodun of Ogun State has been singled out for adulation by Nigeria’s number one industrialist, Mr. Aliko Dangote and the Governor of the Central Bank of Nigeria (CBN), Mr. Godwin Emefiele. Both of them were interviewed as part of the commemoration of the visit of President Muhammadu Buhari to Ogun State and spoke glowingly of their various experiences interacting with the state and the Abiodun administration and the extensive work the governor was doing to make Ogun State an investor’s paradise.

During the widely-televised visit, President Buhari launched several important infrastructural projects that were carefully designed and implemented under the watch of the state governor.

Prince Abiodun’s vision of integrating the state into Nigeria’s infrastructure redevelopment drive, facilitating trade and commerce between adjoining states and positioning the state as the gateway to the country’s renewed industrialisation effort has remained relentless.

Some of these important infrastructural projects launched by the president include the 14-kilometre Ijebu Ode-Mojoda-Epe Road, a road that was previously a barely passable single-lane nightmare stretch of road which obstructed and entrapped important intrinsic value of trade and commerce that could be emancipated and harnessed between two neighbouring states. The passageway, which was a former nightmare to commuters, has now metamorphosed into an expansive dual carriageway of pure joy that juts into a 10-lane toll plaza built to ensure the road’s maintenance and longevity.

Observers have said that what is most commendable about the road is that it was built during the pendency of the negative effects of the Covid-19 pandemic and delivered even ahead of its scheduled completion period!

Also inaugurated by the president was the 42-kilometre Sagamu-Abeokuta Interchange which was itself once the stuff of legends. What has now been transformed by the Prince Dapo Abiodun administration into a 42-kilometre long and 24.6 metres wide road, a major route of trade and commerce for many travellers from all over Nigeria, especially the South-eastern and Northern parts of the country was once full of copious tales of woes.

Thankfully, the intrinsic value trapped in that road has now been finally unlocked by the simple application of private-sector astuteness in governance with the coming of the Prince Dapo administration. Add to this an initiative known as ‘Let There Be Light’ wherein the Ogun State government cater for the travellers who ply the road by providing bright lights for safety and security reasons.

During the visit, President Buhari also launched other important infrastructure assets in the heart of the state capital, Abeokuta that includes ‘The Gateway City Gate Monument.’ The grand monument which stands at a major entry point to the state was rebuilt with a new allure to visitors who access the state from the Sagamu- Abeokuta interchange. In like manner, 527 units of low-cost housing at the Kobape Housing estate and 85 units of luxury houses for upscale and high-level executives managing their businesses in Ogun State at the Kings Court Estate were also inaugurated by the president. With this, the state government has built a total of 1,500 housing units in just over two and half years of its administration.

Speaking on the giant strides of Governor Abiodun, his governance style and his private-sector imprint on governance in Ogun State, Dangote, President and CEO of Dangote Industries, described the governor’s emergence as a breath of fresh air for so many investors currently invested in the state and described him as somebody to look out for in the future of governance in Nigeria. He insisted that no one needs solicitation to invest in Ogun State. With confidence in the governor’s style of leadership, he added that the governor is the best thing to have happened to Ogun State.

“Prince Dapo Abiodun is coming with a lot of private sector experience and we as industrialists in the state don’t even have to tell him what we need, he is one of us. He knows what we need and before you even ask him, he will take action. Let me give you a typical example, the road linking Ogun State from Lagos from the Epe side, that road has been abandoned for many years, and you can see how he quickly moved into action to fix that road. We wanted to go and do the road on our own, but the Governor didn’t wait. He moved quickly to fix the road and you can see all over the place he’s linking roads either from Ogun to other parts of Nigeria.

“I think having Prince Dapo Abiodun there as the Governor of Ogun State is attracting a lot of investors to Ogun State and any serious investor doesn’t have to think about it, they should just move there and invest. Having Abiodun there with his leadership style is the best thing that has ever happened to Ogun State.”

Also speaking on Prince Dapo Abiodun’s achievements, the CBN Governor, Emefiele, noted that upon his assumption of office, Prince Abiodun approached the CBN with his development blueprint for Ogun State which would encourage more and more manufacturing companies to come to Ogun State to establish their businesses.

According to him, “Upon assumption of office, Prince Abiodun approached the CBN with his development blueprint for Ogun State which straddled agriculture, infrastructure, improving the ease of doing business in Ogun State that would encourage more and more manufacturing companies to come to Ogun State to establish their businesses.

“I must say he has done an excellent job, beginning with the very impressive IGR growth that stands out from most across the country; this is primarily because he has been able to attract more investors to establish in Ogun State and I would like to congratulate him and congratulate the people of Ogun State on having someone like Prince Dapo Abiodun as their Governor and I think what this does is it gives more and more people in the private sector, the tonic to want to come into governance.”

The Prince Abiodun-led administration upon assumption of office launched an ambitious development programme to refocus and repurpose Ogun State for growth and development. The programme launched under five pillars of implementation is termed ISEYA, an acronym for the Infrastructure, Social Development, Education, Youth Development and Agriculture. Incidentally, Iseya in Yoruba expression simply means ‘it is time to work.’ With the extensive actions and projects in the full glare of the people, the governor seems to be showing the world that indeed, the time for work is truly at hand.

It is hoped his efforts and experience will encourage more successful private sector operators to venture into governance and improve the overall levels of service delivery to the benefit of the people.