Video: Tweeting from the Gym, Tinubu Says ‘I Strong, Healthy, Ready to Serve from Day One’ 3 mins ago 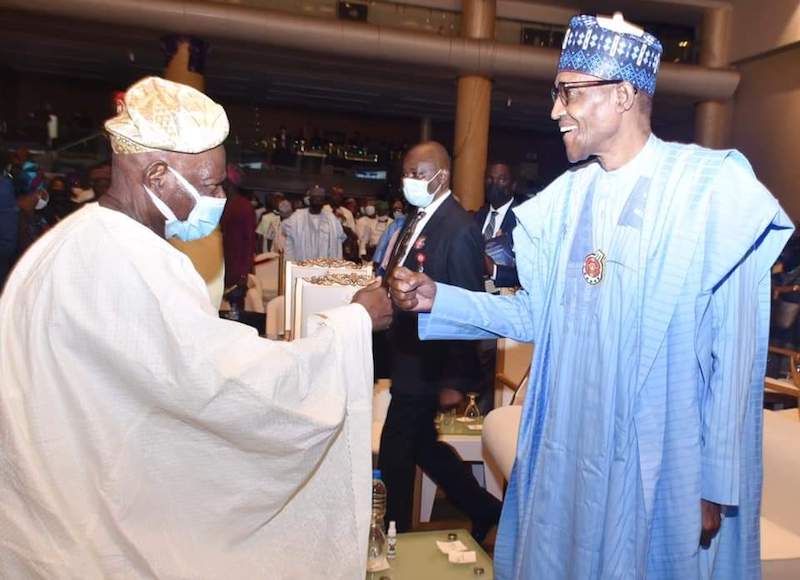 President Muhammadu Buhari on Thursday reminisced on the failed bid by former Governor Bisi Akande to seek re-election in Osun state in 2003 and laid the blame squarely on the doorstep of then President Olusegun Obasanjo.

He also described Akande who served as the pioneer National Chairman of the ruling All Progressives Congress (APC) as a man of inflexible integrity and a perfect public officer that he could follow to the jungle.

The President, who spoke in Lagos at the public presentation of ‘‘My Participations,” the autobiography of Chief Bisi Akande, reflected on the political history of the author, particularly his bid to seek a second term as Governor of Osun, and declared: ”It is common knowledge that Akande was the victim – along with other AD Governors – of a diabolical double-cross which ended his gubernatorial career. Only the steadfast Asiwaju Bola Tinubu escaped the electoral massacre masterminded by President Obasanjo.
”Desperately disappointed though he was, and being a good Muslim, he accepted this setback as part of the trials of life. He looked to the future of service to the country.”

President Buhari also narrated how Akande had risen to prominence from his participation in the Constituent Assembly established by the Military Government of General Olusegun Obasanjo.
His words: “He was always in the thick of things through the difficulties and political discontinuities of the 1980s and 90s.
‘‘He emerged as Governor of Osun State in 1999 when the military handed over to the civilians.

”Chief Akande had a horrendous baptism as Governor of Osun State with discord from his own party; his State Assembly (including an attempt to impeach him without any reason whatsoever); from the trade unions and from his own deputy Governor!
”On top of that, he inherited a deeply indebted Treasury, huge arrears of salary, allowances, and pensions. Enough challenges to overwhelm many aspiring leaders.
”Bisi Akande stood four square and faced all the challenges head-on and overcame most of them.
”His first action was to stop payment of “critical allowances” a euphemism for government money customarily shared by the big boys in Osun State.

”This set the tone of his Administration,” the President said.
Recounting the achievements of the former Governor of Osun State, President Buhari noted that it was on record that within one year, Akande had paid off all the salary and other arrears, showing his mettle as a competent and serious administrator.
”By 2003 Chief Akande had virtually sanitised governance in Osun State having cleared some of the troublemakers from his government and, though reluctant to serve a second term, he was persuaded to run again”.

He further described Akande as a “perfect public officer,” and the type of person he could go into the jungle with adding that the author has retained his ‘‘inflexible integrity,” in and out of public office, never accepting or offering bribes.
President Buhari, who heaped praises on the former governor of Osun State, further described him as a decent, truthful, and friendly person as well as an administrator of the first order, whose leadership qualities made him the unanimous choice as the first Chairman of the APC.

He used the occasion to narrate his first meeting with Akande, his passion for Nigeria, achievements, and disappointment as governor of Osun State as well as his many battles to wrest power from the then ruling party, the Peoples Democratic Party.
According to him: ”My first personal contact with Chief Akande was, if I recall correctly, in 2006 when preliminary consultations were coming to fruition for a grand coalition to unseat the PDP Government. Those efforts eventually came to nothing.
”Neither he, nor I, nor many of our friends and associates gave up as, in Chief Akande’s words: “the country was going down and down under PDP” (p.396 of My Participations)”.

Reflecting on APC’s ascent to governance at the Federal level in 2015, President Buhari recalled that ”Chief Akande was in the thick of further attempts in 2011 and 2014 to fuse together different groups and dislodge PDP from governance.
”The key to his thinking which coincides with mine is that Nigeria can only be successfully managed by alliances between major groups.
”Although we failed in 2011 but by persistence and knowledge that PDP was driving the country towards disaster, several major parties were able to finally coalesce into APC in 2014 .

”Chief Akande was unanimously chosen as the first Chairman of this great coalition.
”Throughout the difficult negotiations, I found Akande truthful, steady and always with an eye to the ultimate goal.
”In or out of office, he has retained his inflexible integrity. On p.400 of his book, he wrote: ‘I never gave to or demanded bribe from anyone all my life.’ A perfect gentleman. A perfect public officer, he said.
Quoting a famous Hausa saying, ”Labarin zucciya a tambayi fuska” (loosely translated -if you want to know what is in a man’s heart watch his face), President Buhari affirmed that Akande has a permanent smile on his face, saying ”He is the type I will go into the jungle with.”