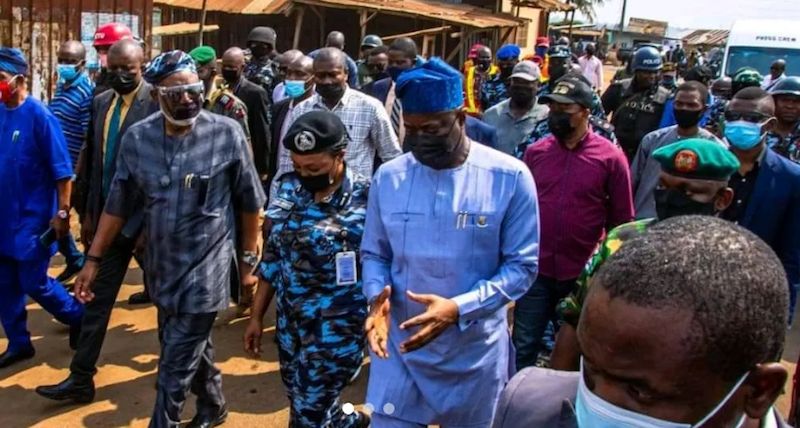 The Governor of Oyo State, Mr. Seyi Makinde, yesterday visited the scene of a clash that occured in Iwo Road Area of Ibadan, the state capital on Wednesday, and threatened to deal with the perpetrators.

The clash between some drivers who are members of Park Management System (PMS) and some telephone sellers led to the death of two persons.

In a tweet, Makinde regretted the loss of lives as a result of the clash, promising that those involved will be brought to book.

He said he had ordered an investigation into the incident

“I visited the scene of the Iwo Road incident this morning. The loss of lives during the mayhem that occurred is unfortunate and should never have happened. I give you my word that we will ensure that everyone involved in the dastardly act is brought to book.

“I have ordered investigations. In the meantime, we will sanitise the area behind Iwo Road where cultists congregate and review the Park Management System. We have also informed the phone sellers to choose representatives who will discuss how we can assist them.”

Meanwhile, the Oyo State chapter of the All Progressives Congress (APC) yesterday asked the governor not to return the state back to the era of brigandage.

The main opposition party in the state condemned the Wednesday’s violence and called on the governor not to return the state back to the era of brigandage.

It urged him to learn from the eight peaceful years of the administration of the late Senator Abiola Ajimobi.

The party in a statement by the state Publicity Secretary, Dr. AbdulAzeez Olatunde, and made available to THISDAY, condemned the violence unleashed on innocent traders and passersby at the Iwo road axis of Ibadan, describing it as barbaric and wicked.

It noted that the people of the state had not enjoyed a secure environment since the assumption of the Makinde-led administration on May 29, 2019, recalling the governor’s promise during his recent visit to Igangan area of the state after the June 6 bloody mayhem in the town where he promised that the incident was the end of security breaches in the state.

It said, “The people of Oyo State are again reminded of the promise of Gov Seyi Makinde when he visited Igangan after the bloody mayhem of Sunday, June 6. Just 10 days ago, the governor promised that would be the end to security breach in the state. This is another breach, just 10 days that the governor accepted responsibility fo