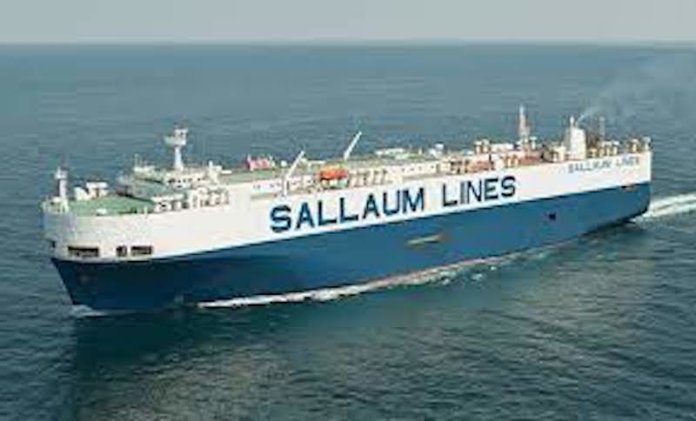 Sallaum Lines Shipping Company is in the eye of the storm after it allegedly failed in its duty of care to a customer, Substead Nigeria Limited, which conveyed CAT excavators, truck heads, krone flatbed, Kaiser lowbed and a Hitachi Crawler Crane, into Nigeria through the company.

It was learnt that the consignments were transported via a vessel named “Silver Ray” in a bill of lading marked SL00549774 which arrived on April 8, 2020, at Five Star Logistics Port terminal Lagos, and were found to have been vandalised when checked on arrival, with losses amounting to about N288 million since then.
It was discovered that the MAN truck (074116) attached with a lowbed conveying the Hitachi Crawler Crane and another MAN truck (418183) attached with a flatbed carrying the boom part of the crane were completely vandalised.

“The ECU (Electronic Control Unit), power windows electronics on both equipment were removed and the front of the trucks and other body parts were badly damaged in the course of the shipping company pulling it out of the vessel because they made use of ropes against the normal towing accessories therefore damaging the bodies of the equipment.

“This action was due to lack of value for people’s investment and having a nonchalant attitude towards their customers, especially Nigerians,” a source who preferred anonymity stressed.
THISDAY checks showed that all the equipment belonging to Substead were driven on board Sallaum Lines vessel, Silver Ray, in perfect working conditions, but arrived Nigeria in a bad state.

A source said several mails dated 19th May, 2020, 27th May, 2020, 28th May, 2020 and 4th June, 2020 communicating the claims on the damaged equipment were relayed to Sallaums lines informing them of the damages, without any response.

It stated that Sallaum lines requesting that Substead limited provides the Vehicle Inspection and Observation report which is their own internal document goes to prove that there’s a deliberate attempt to avoid taking responsibility for their negligence and their usual way of frustrating Nigerians, something the source said the company cannot do outside the shores of the country.

In a letter dated 19th May, 2020, Substead Limited had demanded that all the missing parts from the equipment should be replaced and fixed by Sallaum lines and that the shipping line and the port terminal demurrage incurred during the incident should be borne by Sallaum lines.

It was further learnt that the aggrieved company said the damages on the equipment should be swiftly assessed and funds for the fixing be made available, stressing that the complete keys to each equipment should be made available to them when taking delivery.
Substead was said to have maintained that the continuous delayed responses to their various letters to Sallaum lines was meant to achieve more accumulated demurrage and charges from them as it had become the company’s habit.

“Even after being directed by Sallaum Lines to contact and refer their updated letter of the damages claimed to Five Star Logistics which was sent with picture evidence and other relevant documents both via mail and hard copies through DHL services, Five Star Logistics denied taking responsibility for the damages’’, the source stated.

The source further alleged that there was a clear indication that Sallaum Lines and Five Star Logistics were both working in synergy to muddle up the matter and deprive the company of its appropriate compensation on the matter.

“Up till date, after almost one year since our equipment arrived at Lagos port terminal, the damaged equipment have not been repaired neither have we been paid for the damages and losses caused by Sallaum Lines and their cohort which has amounted to N287,922,864.03. We are currently in serious indebtedness.

“These incessant delay tactics and frivolity exhibited by both Sallaum Lines and Five Star Logistics go to show the extent of their collaboration in trying to frustrate all our efforts in trying to reach them and get compensated for our damaged equipment,” said the source.

It accused the shipping line of never taking responsibility for its shortcomings and believing they are above the law with the intention of deliberately making Substead run into losses and paying for all the demurrage and terminal charges accrued caused by the shipping company’s failure.

“We call on the National Assembly through the Senate Committee on Local Content and every other appropriate authorities for their intervention on this matter because all of our equipment at the Lagos port terminal are wasting away and depreciating without any compensation from Sallaum Lines for our losses,” said the source.