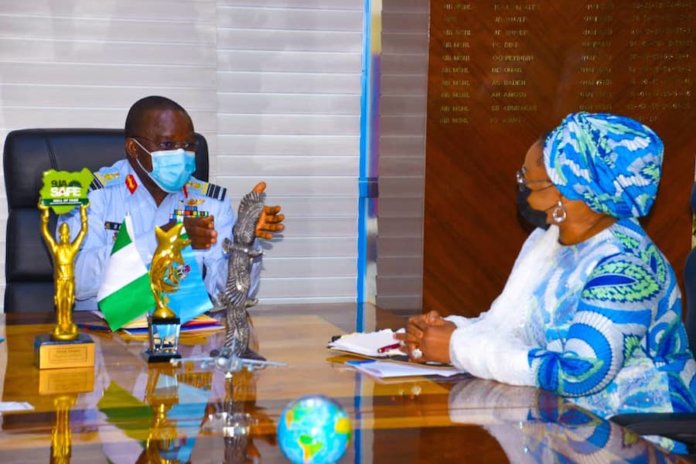 Chiemelie Ezeobi reports that as part of measures to effectively combat human trafficking and degradation, the National Agency for the Prohibition of Trafficking in Persons recently sought the partnership of the Nigerian Air Force in areas of intelligence gathering, airlift capabilities and technical training of its personnel

Nigeria is a source, transit, and destination country for women and children subjected to trafficking in persons including forced labour and forced prostitution. Infact, the prevalent nature of human trafficking has been a burden the government has tried severally to ameliorate.

This global crime against humanity is defined by the United Nations as the “recruitment, transportation, transfer, harbouring or receipt of persons, by means of the threat or use of force or other forms of coercion, of abduction, of fraud, of deception, of the abuse of power or of a position of vulnerability or of the giving or receiving of payments or benefits to achieve the consent of a person having control over another person, for the purpose of exploitation.

In 2003, the United Nations’ Convention Against Transnational Organised Crime set up a document titled ‘the Protocol to Prevent, Suppress and Punish Trafficking in Persons, Especially Women Children, Especially Women and Children’. This protocol is focused on the prevention, investigation, and prosecution of human trafficking.

Of the 193 member states to the UN , 171 states have become party to this protocol and Nigeria is one of those countries that ratified this protocol. However, enforcement has been a challenge.

NAPTIP’s Request
It was part of measures to implement and enforce the protocol against human trafficking that the Director General (DG), National Agency for the Prohibition of Trafficking in Persons (NAPTIP), Hajiya Imaan Sulaiman-Ibrahim recently paid a courtesy call on the hierarchy of the Nigerian Air Force (NAF) in Abuja.

The DG solicited for the assistance of NAF in combating human trafficking and all forms of human degradation in the country, as well as support in the areas of intelligence gathering and technical training of its personnel amongst others. According to her, human trafficking is the second most lucrative criminal enterprise in the world that poses human and strategic risks to national securities of nations.

She went further to state that human trafficking as a form of modern day slavery is lucrative as it is a $150 billion industry, hence the need for all stakeholders to synergise to tackle the menace.

Sulaiman-Ibrahim used the visit to appeal for the support of the NAF in the areas of personnel training and revenue mobilisation, just as she went further to disclose that plans were underway by the agency to establish a training academy and requested for NAF’s assistance towards the provision of infrastructure. She also used the visit to request for NAF’s assistance in the area of airlift to enable the agency overcome some of its logistics challenges.

NAF’s Assurance
In his remarks, the Chief of Air Staff (CAS), Air Marshal Oladayo Amao, appreciated the DG for her efforts in addressing the challenges posed by human trafficking in Nigeria and assured her of the NAF’s willingness to partner with NAPTIP towards fighting the menace.

On the request for NAF assistance towards training of NAPTIP personnel and the establishment of a training academy, Air Marshal Amao stated that the agency could leverage on NAF School of Air Intelligence at Makurdi towards training some of its personnel in acquiring basic intelligence knowledge to bring them up to speed in intelligence gathering to combat human trafficking.

Speaking further, he assured the agency of airlift whenever required. The CAS therefore directed the Chief of Training and Operations, to constitute a team comprising NAF and NAPTIP personnel to work out modalities of harmonising all requests and bringing the collaboration to fruition, adding that “It is good that we all work together to keep our citizens and nation safe”.

According to NAF Director of Public Relations and Information, Air Commodore Edward Gabkwet, those present during the visit include the NAF Chiefs of Policy & Plans, Training & Operations and Administration along with some senior management staff of NAPTIP.

The agency is the Federal Government of Nigeria’s response to addressing the scourge of trafficking in persons. It is a fulfillment of the country’s international obligation under the Trafficking in Persons Protocol to prevent, suppress and punish trafficking in persons, especially women and children, supplementing the United Nations Transnational Organised Crime Convention (UNTOC).

Nigeria became a signatory to the Transnational Organised Crime Convention and its Trafficking in Persons Protocol on December 13, 2000. Article 5 of the Trafficking Protocol enjoins States Parties to criminalise practices and conduct that subject human beings to all forms of exploitation which includes in the minimum sexual and labour exploitation.

The Trafficking in Persons Act 2003 was an outcome of a private member bill sponsored at the National Assembly by the Women Trafficking and Child Labour Eradication Foundation (WOTCLEF), a non-governmental organisation founded by Mrs. Amina Titi Atiku Abubakar, the wife of the Vice-President of Nigeria at that time.

The Bill was passed by the National Assembly on July 7, 2003 and Presidential Assent given on July 14, 2003. The law which is operational throughout the country created NAPTIP as a specific multi-disciplinary crime-fighting agency and the nation’s focal institution to fight the scourge of trafficking in persons in the country using the four pronged approach of Prevention, Protection, Prosecution and Partnership.

The Trafficking in Persons (Prohibition) Law Enforcement and Administration Act, 2003 went through an amendment in 2005 in a bid to further strengthen the Agency. However, in 2015, as a result of the new trends in the crime of trafficking in persons and the need to further strengthen the institutional framework, the Act was repealed and the Trafficking in Persons (Prohibition), Enforcement and Administration Act, 2015 was enacted. The new Act received Presidential assent on March 26, 2015.

Others include Encourage and facilitate the availability and participation of persons who voluntarily, consent to assist in investigations or proceedings relating to trafficking in persons and related offences; Enhance the effectiveness of law enforcement agents and other partners in the suppression of trafficking in persons; Create public enlightenment and awareness through seminars, workshops, publications, radio and television programmes and other means aimed at educating the public on the dangers of trafficking in persons; and Establish and maintain communications to facilitate rapid exchange of information concerning offences under this Act.

Finally, they are to deal with matters connected with the extradition and deportation of persons involved in trafficking in persons and other mutual legal assistance between Nigeria and any other country in trafficking in persons, subject to the supervision of the minister; Initiate, develop and improve special training programmes for personnel of the agency and relevant law enforcement agents charged with the responsibility of detecting offences created under this Act; and Carry out such other activities as are necessary for the efficient discharge of the functions conferred on it under this Act.

With the powers bestowed on it, the agency has the power to Investigate whether any person, body or entity has committed an offence under this Act or the offence of trafficking under any other law; Enter into any premises, property or conveyance for the purpose of conducting searches in furtherance of its functions; and Arrest, detain and prosecute offenders under this Act or any other law on trafficking in persons in Nigeria.

They are also to Trace, seize, detain or retain the custody, for the purpose of investigation and prosecution, of any property which the agency reasonably believes to have been involved in or used in the commission of offences; Seal up premises upon reasonable suspicion of such premises being involved with or used in connection with offences under the Act; and Seek and receive information from any person, authority, corporation or company without hindrance in respect of the enforcement of any of the provisions of this Act.