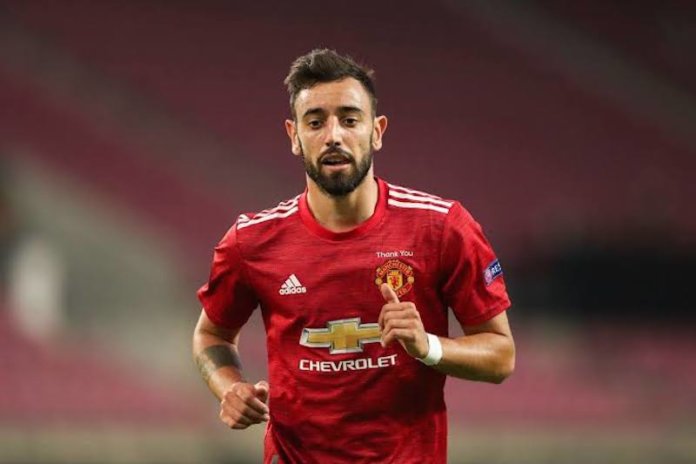 Bruno Fernandes has thrown his support behind Cristiano Ronaldo after the forward emerged as a scapegoat for Juventus’ Champions League exit against Porto.

Andrea Pirlo’s men were dumped out of Europe on away goals after drawing 4-4 on aggregate against the Portuguese outfit, with Ronaldo unable to inspire the Serie A side into the quarter-finals.

Ronaldo was also heavily criticised by the media in Italy for turning his back on Sergio Oliveira’s free kick, which ended up being the decisive goal to send Porto into the next round.

Manchester United star Fernandes, however, doesn’t think all the responsibility should be placed on his Portugal team-mate calling him ‘one of the greats in history’ and pointing out that football is a team game and that every Juventus player must take the blame.

‘Ronaldo? Cristiano is one of the greats in the history of football,’ Fernandes told Gazetta dello Sport. ‘His mentality inspires those who practice this sport.

‘He has won a lot, but no one can win alone.

‘I understand that his presence in Juve had created enormous expectations for the Champions League, but when a team loses, they lose as an entire squad, not a single player.’

Ronaldo joined Juventus for £100m in 2018 with hopes that he could help them win a first Champions League crown in 25 years, but the team have not made it past the quarter-finals since he arrived.

His role in Porto’s long range free kick on Tuesday night was slammed as ‘unforgivable’ by ex-Juve boss Fabio Capello and accused the 35-year-old of being ‘scared of the ball’.

‘That was an unforgivable error,’ Capello said in his role as Sky Sport Italia pundit.

‘In my day, you chose the players who went into the wall and they couldn’t be someone afraid of the ball. They were scared of the ball and jumped away from it, turning their backs. That’s unforgivable.’

Ronaldo was also criticised by his former United team-mate Rio Ferdinand, who said the incident was ‘a catalogue of errors’ as he jumped out of the way.

And former Spurs midfielder Jamie O’Hara said manager Pirlo would be ‘livid’ with his ‘top player’ after the mistake.

Speaking on commentary for talkSPORT, he said: ‘Pirlo will be livid, Ronaldo turned his back completely.

‘It goes through his legs completely and leaves Szczesny with no chance.

‘You don’t want to see that from your top player, not in those moments. You’re relying on your wall to do a job there.’