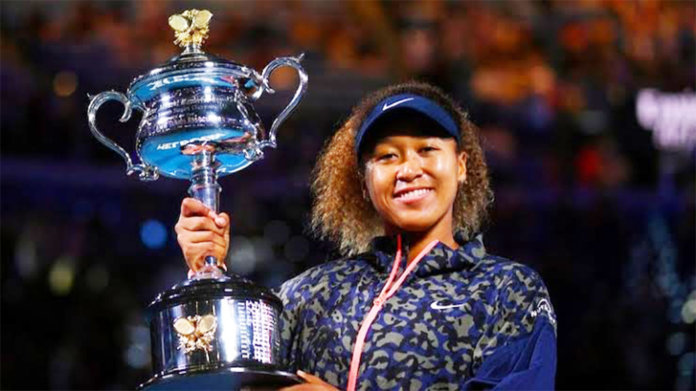 Japan’s Naomi Osaka cemented her place as the outstanding star of the women’s game by beating American Jennifer Brady in the Australian Open final yesterday to win her fourth Grand Slam title.

Osaka edged the first set when Brady, in her first Grand Slam final, paid for some glaring errors in the final game.

The third seed seized control from that point, racing 4-0 ahead in the second set before sealing a deserved victory.

Osaka has now won two Australian Open titles after also triumphing at Melbourne Park in 2019, with her other Grand Slam successes coming at the US Open in 2018 and 2020.

She has not suffered a defeat since February 2020 after extending her winning run to 21 matches. Osaka’s face lit up with a wide grin, raising her racquet above her head, when she clinched the title on her first match point after Brady looped a return long.

Around 7,500 fans were allowed to watch the final on Rod Laver Arena and Osaka lapped up the acclaim after her US Open victory came behind closed doors.

“It feels incredible to have fans, I played the last Grand Slam without fans, to have this energy means a lot,” said Osaka as she clutched the Daphne Akhurst Trophy.

Osaka is the first women’s player to win her first four Grand Slam finals since Monica Seles in 1991. And asked if she could reach double figures in slam titles, Osaka replied: “I’m taking it in sections. Right now, I’m trying to go for five. After five I would think about maybe dividing the 10, so maybe seven or eight.

“I like to take things not big picture. I know that the people that I’m playing against are the best players in the world and, if my time comes to win another Grand Slam, it will come.”