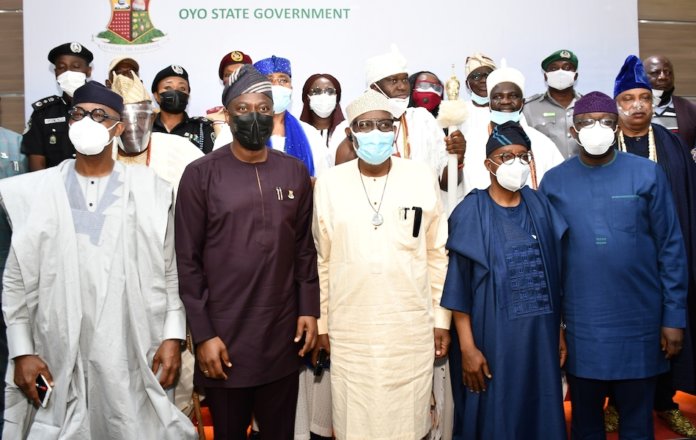 No fewer than six traditional rulers from the South West states Saturday arrived at the Oyo State Government Secretariat, Agodi, Ibadan ahead of a security meeting.

Aside from the traditional rulers, five other state governors have also joined their Oyo state governor counterpart for the meeting.

The guests are part of enlarged stakeholders to participate at the security meeting to be hosted by Governor Seyi Makinde, at the Executive Chamber of the Governor’s Office.
The meeting is to be attended by the Chief of Staff to President Muhammadu Buhari, Prof. Ibrahim Gambari.

The six traditional rulers that have arrived as at the time of filing this report include the Ooni of Ife, Oba Adeyeye Ogunwusi; Alaafin of Oyo, Oba Lamidi Adeyemi; Olubadan of Ibadanland, Oba Saliu Adetunji; Akarigbo of Remo, Oba Babatunde Ajayi, the Olugbo of Ugboland, Oba Fredrick Akinruntan and Olugbon of Orile-Igbon, Oba Francis.Alao.

The early birds are awaiting the arrival of the Inspector General of Police, Muhammed Adamu, the Director-General of State Service, Yussuf Mogaji Bichi and Governor Babajide Sanwo-olu of Lagos

The meeting will also have in attendance members of the Oyo State Council of Obas and State Service Commanders.

Unconfirmed sources hinted that the IGP and DG DSS are expected to make an on-the-spot assessment of the Shasha scene, Akinyele local government where a recent crisis broke out.