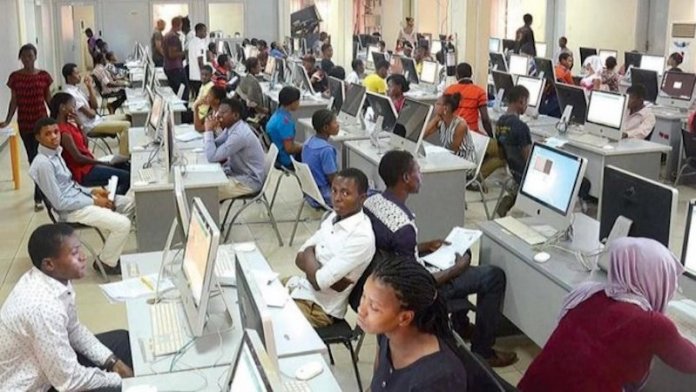 To Spend N100m in prosecution of impersonators

The Joint Admissions and Matriculation Board, (JAMB) has raised the alarm over the influx of fake Computer-based Test (CBT) centres, especially in the northern part of the country.

JAMB has also said it would spend not less than N100 million to prosecute 200 out of the over 400 persons involved in alleged impersonation in the 2020 Unified Tertiary Matriculation Examination (UTME).

JAMB Registrar, Prof Ishaq Oloyede, who disclosed this yesterday at a press conference in Abuja, lamented the increase of fraudulent CBT centres in the North, which he said marked a departure from what has been mostly a problem from the South.

Oloyede disclosed that over 400 candidates currently seeking admissions into higher institutions across the country were involved in admission fraud, alleging that some tertiary institutions were accomplices in the widespread irregularities.

According to him, the first 64 cases of CBT infractions currently treated by the board were from the North, with some having multiple cases of up to 96 irregularities.

The JAMB boss further noted that compromised tertiary institutions were engaging in change of photographs and biometrics of candidates contrary to an earlier directive by the Minister of Education, Mallam Adamu Adamu, which has allowed for impersonation.

Recall that Adamu had directed institutions not to take any new photograph or biometrics of candidates after the registration as a measure to curb the problem of impersonation.

Oloyede restated the readiness of JAMB to implement the decision of the minister, warning that any public institution that violates the directive would be treated as an accomplice and named, and shamed, while private institutions could have their licences withdrawn.

According to him, “This year, we have over 400 people that were caught, whereby those who wrote the examinations were different from those who applied. We are waiting for the institutions to come up and report activities of the fraudsters.”

The registrar vowed that 200 of the candidates would be prosecuted; one from each state of the federation as the board does not have the resources to prosecute all the 400 candidates, adding that prosecuting a candidate would cost the board over N500,000.

While urging institutions to look inwards and monitor the activities of their ICT staff, he warned candidates to desist from fraudulent changes to their portals as JAMB is aware of all activities performed on them.

Meanwhile, one Buhari Abubakar, who was caught in an attempt to impersonate, and his alleged accomplice in examination malpractice, Muhammad Sanusi, both from Kano State, were also paraded before journalists after being arrested by men of the Nigeria Security and Civil Defence Corps, NSCDC.

Abubakar, a candidate of the Unified Tertiary Matriculation Examination (UTME) in 2020, had paid Sanusi the sum of N25,000 to source for an examination-taker to write the UTME for him, on the basis of which he secured admission into Bayero University, Kano, to study Islamic Studies.

He said: “However, the arrangement ran into hitches when all the candidate’s details, including his identity card, carried the passport of the hired examination-taker. This scoop was made possible because BUK had complied fully with the ministerial directive that only data supplied by candidates during registration should be used by institutions during the fresher’s registration.

“Abubakar had sought ways he could change the passport of the examination-taker to his own, but was unsuccessful in the course of which he was arrested.

“Mr. Abdullahi Sarki, also arrested, had promised to change the passport for the examination-taker to that of Abubakar, which he could not.”