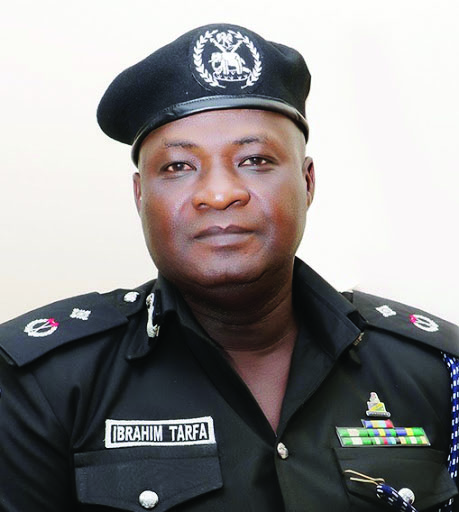 The last time we met, he was hale and hearty. That was at the official inauguration of the NPF Pensions House, Abuja by President Muhammadu Buhari on October 20, 2020. We exchanged pleasantries. DCP Ibrahim Tarfa was happy, as always, to see me. Subsequently, as the year gradually ended, we exchanged Christmas and New Year greetings and I was looking forward to seeing him again anytime I travel to Abuja in the New Year.

Then, on January 16, I got a text from Mr. Chukwuma Ohaka, the Business Development Manager of NPF Pensions Limited. It was an obituary. Guess whose death was being announced? DCP Ibrahim Tarfa. I got the text at 4.07 pm, six hours after he had been buried. He was only 57 years.
Nobody has been able to explain what really happened. The grief is overwhelming. You needed to make Tarfa’s acquaintance to appreciate why.

I didn’t quite understand what it meant when uniformed men use the phrase, an officer and a gentleman, to describe one of their own until I met Tarfa, a Deputy Commissioner of Police (DCP) at a public function in Lagos.
The management of Nigeria Police Force Pensions Limited was in Lagos on its annual pre-retirement seminar to sensitise, educate and adequately prepare officers on the verge of retirement on what life is on the other side of the divide.

DCP Tarfa, a director of NPF Pensions Limited and the liaison between the police and their pension fund administrator (PFA) in his capacity as CP Pensions was part of the team that came from Abuja and the first to talk. That was on Monday February 3, 2020.

His message was pointed and firm, even as he spoke softly. He told the retirees to shed their lethargic garment and take the issue of pension serious because that makes the difference in life after retirement.
“A time will come when we will leave the comfort of our uniforms and offices for retirement, yet a lot of us don’t take retirement very serious,” he said.

“Many policemen tend not to give a thought to life after retirement when they are still in service. There is no preparation for the day which will surely come after either 35 years in service or on attainment of 60 years of age. The consequence is that life after retirement becomes a drudgery at best, or at worst a death sentence.”

But he insisted that retirement does not mean an end to active life. “Some people have found more meaning in life after retirement than when they were in active service,” he said, taking them on a guided tour of their rights, entitlements and obligations before and after retirement.

By the time he finished, gloomy faces apprehensive of life after retirement brightened up. Armed with information and power, they were ready, better equipped to face tomorrow.
When he sat down, I enquired who he was and a member of the NPF Pensions team simply replied: He is Mr. Pension of the Nigerian Police.

We instantly became friends. Meeting DCP Tarfa for the first time, you will go away with the feeling that you have known him all your life. Humble, self-effacing and unassuming, he will be the first to greet even those unworthy to untie the strap of his sandal.

DCP Tarfa was as an officer, a leader of men, who led by showing in himself such qualities as he desired to bring out in those under him. He was a gentleman par excellence, an epitome of virtue, honour, patriotism and subordination.

His selflessness was beyond compare. As the Deputy Commissioner of Police appointed director on October 27, 2017, to represent the Police Pension Office on the Board of NPF Pensions, Tarfa dedicated the last three years of his life to police welfare.

Staff of NPF Pensions unanimously acclaim that he added value to the PFA. Always eager to serve and help those in difficult situations, Tarfa had the uncanny ability to relate well with both the low and mighty.

As a management staff put it, “DCP Tarfa was very passionate for police welfare and was always ready to serve.”
He was reputed to have helped significantly in untying the accrued rights knot and was at the forefront in the resolution of the nominal rolls saga. He not only made sure that senior police officers did not have any pension issues, being, as it were, at their beck and call, widows and next of kin of fallen officers had his back.
In DCP Tarfa’s death, police lost a treasure and the country lost one of its best. He was an intellectual in uniform.

As at the time he died, he was a PhD research fellow at the Nigeria Defence Academy (NDA), Kaduna, where he also holds a Master of Science degree in Defence and Strategy. He also had a Masters degree in Law Enforcement and Criminal Justice from Ahmadu Bello University, Zaria.

Before he enlisted into the Nigerian Police Force in 1990, he had a Bachelor of Science degree in Sociology and Anthropology from the University of Maiduguri.
Commissioned Cadet ASP in 1990, Tarfa became a DCP in 2017 having attended the junior command, intermediate and CSP-ACP promotion courses at the Police Staff College, Jos; high level management course at the United Nations Centre for Excellence at Vicenza, Italy and the corporate governance course (Kellogg), U.S.

His knowledge of the North was encyclopedic. Though a Bura by tribe – one of the little known minority ethnic nationalities in Hawul LGA of Borno State – Tarfa lived, died and was buried in Kaduna State. He worked in the Katsina, Taraba, Nasarawa Police Commands in various capacities as DPO, Area Commander and Police College Kaduna before coming to the Force Headquarters, Abuja where he was on the Inspector General of Police’s management team and served as the CP Pension in the Department of Finance and Administration, Force Headquarters.

When I needed to have a better understanding of the real issues in the North East, I consulted him. His analysis always contextualized the issues. It was always devoid of any sentiments because as he would always say, “I am involved.” He was a most detribalised Nigerian. At 57, DCP Tarfa still had so much to offer the police and his country, Nigeria. In his death, the police lost a gem. Nigeria lost a treasured asset. May his soul rest in peace even as his memory remains a blessing not only to those who knew him but the country he loved and served with an unequalled passion.
Ikechukwu Amaechi, Managing Director/Editor-in-Chief, TheNiche on Sunday newspaper