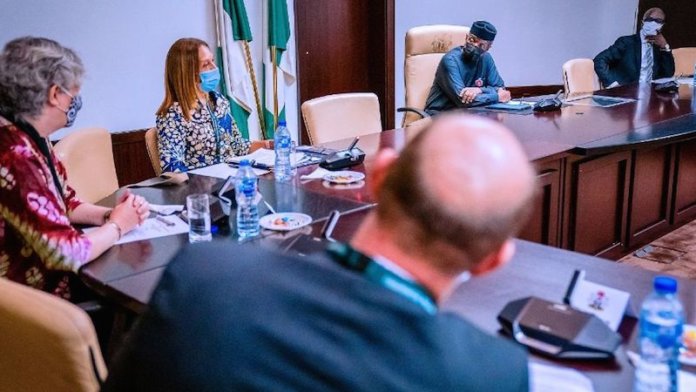 Receiving a delegation led by the Prime Minister’s Trade Envoy to Nigeria, Ms Helen Grant, Vice-President Yemi Osinbajo said he was excited to discuss economic prospects between the two countries.

“I am really excited about the prospect of what the next few months and years hold for our two countries. I also share your optimism that this is probably the best opportunity for us to do a lot. And to do so in a manner that will make a great difference for our two countries,” he said.

A statement by the vice-president’s spokesman, Mr. Laolu Akande, said the vice-president noted that the COVID-19 pandemic era provides both countries with the opportunity to adopt innovative ways of addressing challenges confronting them.

Osinbajo listed areas of interest to Nigeria to include: education, capacity building in the judiciary sector, among others.

Akande said Grant described her visit to Nigeria as a deliberate move by the UK government ahead of Brexit to deepen conversations with friendly countries in different sectors.

She said aside trade, both countries could work harder to also strengthen ties in agriculture, health, technology, judiciary and other sectors, saying Britain’s desire is that Nigeria records improvements in the aforementioned areas.

The statement added that Grant said she was excited by her appointment as trade envoy to Nigeria because she was born to a Nigerian father, describing her new assignment as a dream job.

She promised to promote deep trade relations between both countries by connecting more British investors to do business in Nigeria.

The statement added that the Minister of Foreign Affairs, Geoffrey Onyeama, and officials from the UK High Commission were present at the meeting.

China-Nigeria Relations in the First and Next Fifty Years: Issues, Expectations...

China-Nigeria Relations in the First and Next Fifty Years: Issues, Expectations...