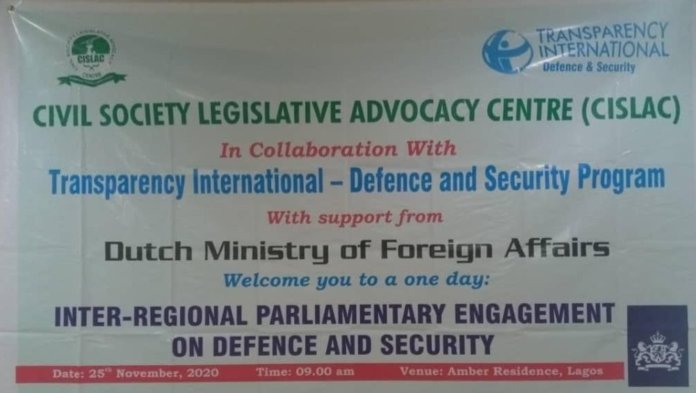 Chiemelie Ezeobi writes that the recently held Inter-regional Parliamentary Engagement on Defence and Security by Civil Society Legislative Advocacy Centre was targeted at galvanising security governance within the region in a bid to find coordinated approaches in terms of response, both in policy and practice

To galvanise security governance in Nigeria and Africa as a whole, the Civil Society Legislative Advocacy Centre (CISLAC) recently held an Inter-regional Parliamentary Engagement on Defence and Security where an Inter-parliamentary working group was inaugurated to discuss mutual security concerns and find a more coordinated approach in terms of response, both in policy and practice.

Held in Lagos, the high-level parliamentary meeting, according to earlier information provided by CISLAC Program Officer (Defence and Security) Bertha Eloho Ogbimi was part of their effort to galvanise security governance within the region.

According to CISLAC Executive Director, Auwal Ibrahim Musa (Rafsanjani), “contrary to the conventional wisdom that executive branch authorities bear sole responsibility for all potential sources of conflict, we have noted that parliaments have an essential role to play by virtue of their place within the structure, functioning and activities of the state within the region.

“As representatives of the people, parliaments also
enjoy legal, political and social legitimacy. We have therefore reached a conclusion that parliaments need to be more engaging in this legitimacy in determining the scope of their activity. In terms of how
they can contribute to conflict prevention and management, we have stressed that parliaments need to develop a vision, formulate strategies, devise structures and marshal resources for the primary
objective of consolidating peace – peace being not one goal among others
but the goal!

“As a matter of good governance, in their efforts to prevent conflicts and other crises, depending on the causes alluded to above, we believe
that parliaments should exercise heightened vigilance as to the rule of law, as part of their government oversight mission; ensure that human rights legislation is in place, up-to-date with prevailing international norms, effectively enforced and
disseminated to constituents; ensure that their own governance provides a model that adheres
to democratic principles, respects the rights of minorities and the underprivileged and reflects a pluralistic, inclusive society; and ensure accountability and transparency in defence and security
policies and decisions to reduce the risk of corruption.

“They are also to ensure that institutions are strengthened so as to regenerate public confidence (we consider it indispensable to provide leadership
that can rally the public behind efforts to build a democratic society); and ensure democratic alternation by establishing a transparent electoral system and reordering political party culture to accommodate increased participation by women, youth and minorities, with mechanisms
to facilitate regular elections.”

To make the system more operational, he added, “ we have recommended that political parties attempt to instill amongst their members a spirit of tolerance, discipline, and respect for electoral verdicts, and to keep them well informed on issues of national interest and potential causes of conflict.”

In his session on the issue of “Evolving defence and security concepts and actors: a challenge faced by parliaments” CISLAC Conflict Advisor, Salaudeen Hashim, addressed the age-long challenge of secrecy versus accountability.

According to him, in secrecy versus accountability, the popular reasoning is that “all matters relating to National Security are secret and cannot be disclosed (Freedom of Information Act 2011: seeks to protect the disclosure of information relating to defence)” but the truth remains that “
Improving governance of the defence and security sector in West Africa face a number of formidable challenges, many of which require a regional focus given the cross border nature of security threats faced by West African countries.

“In many instances, however, parliamentarians are willing but not entirely able to overview the government and its agencies, due to lack of human and budgetary resources. Those resources, such as a parliamentary staff, provide parliaments essential capability to perform oversight.”

He posited that while secrecy protects sensitive information, accountability on the other hand enhances national security, especially in conflict; increases operational effectiveness and prevents

harm to individuals, transparency on the other hand limits space for hiding wrong-doing; enables prevention and quicker detection of problems and anomalies, including corruption; builds trust among adversaries; enables accountability and civic engagement and protects individuals from arbitrary decisions.

Still on the conundrum facing secrecy and transparency he said while the latter restores national pride and trust in the armed forces, the former presents an opportunity for graft and corruption: large budgets + discretionary authority + secrecy. He further posited that secrecy hides all manner of mistakes, inefficiencies and crimes.

Harping on the changing nature of insecurity, he posited that its negative impact affects strengthening parliaments as institutional actors of security sector governance; recognising that security can only be ensured through democratic control of the security sector; public trust in the armed forces; adding that a system of civilian oversight is needed to ensure transparency and accountability of the armed forces and security services.

Quoting Nigeria GI MAIN findings, he said bemoaned lack of transparency and accountability around defence policy, budget and procurement, adding that the National Defence Policy is outdated, reviewed version not implemented and monitored regularly and not submitted to Parliament for approval; significant irregularities with regard to the defence budget; and the defence procurement process is opportunistic and lacks proper planning.

On the issue of weak institutional oversight over the defence and security policies and budgets, the findings posited that while parliamentary oversight is weak, there is no adequate scrutiny of the defence budget or defence policy with lack of expertise and high turnover in committee’s membership; very few public hearings of defence officials; army committee proceedings are restricted on the ground of national security and the Office of the Auditor General lacks resources, independence and expertise to carry out its mandate.

Also addressing weak military personnel systems that encourage predatory behaviour, they posited that there is still a high risk of ghost soldiers, despite IPPIS; the recruitment process of military personnel at all levels is defective, based on ethnic and religious considerations; allegations that Nigerian troops deployed in the North East to fight Boko Haram are involved in illegal activities (extorting money from the population, demanding bribes, involved in smuggling activities).

Harping on the role the legislative arm of government plays, he said they are the principal

law-making institution in democratic states and they play the central role in the field of defence to protect against corruption and enable proper scrutiny of the legislative.

He further added that they play the oversight function of checking the excesses of executive power; ensure that the government operates lawfully and hold the defence (secretive sector) to account. 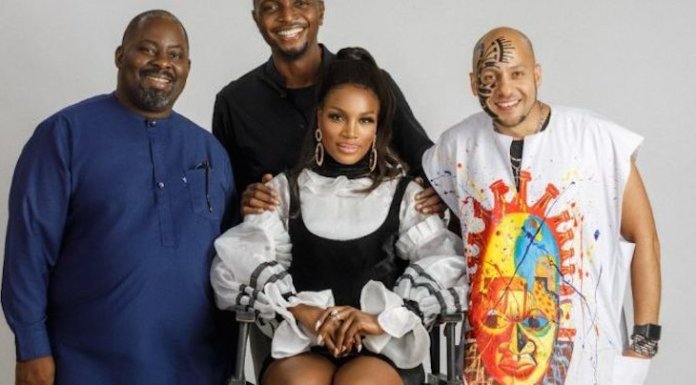