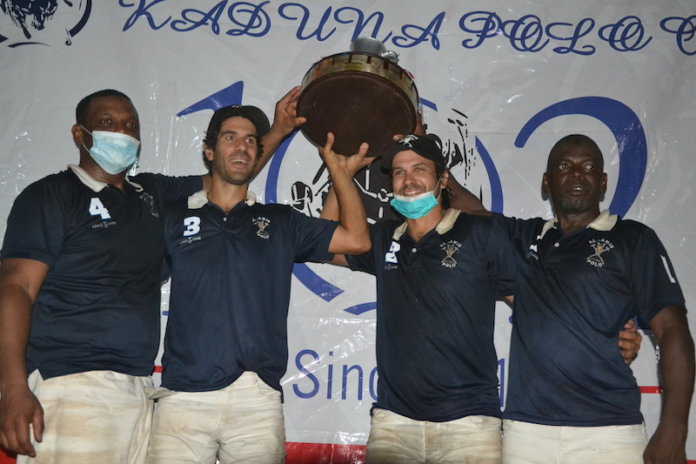 Playing like a team infused with the winning bug, Kaduna-based polo team, El-Amin, galloped their way back to victory, claiming the 101 edition of the FirstBank of Nigeria sponsored Georgian Cup which held at Kaduna Polo Club at the weekend.

To emerge victorious, El-Amin outplayed its rival, Abuja Rubicon by 9-goal to 7-goal.

Parading a high powered team led by Nigeria’s highest ranked polo player, Bello Buba, the teams Patron, Mohammed Babangida and two other mercenaries; Martins Sowedo and Raul as against Abuja Rubicons, Donovan, Manuel Crespo, Idris Gbadamosi and Ibrahim Gbadamosi, El-Amin proved that when it come to high goal event, they are second to none.

It was sweet victory for El Amin after losing out of the centenary edition of the tournament.

Speaking immediately after the victory, Babangida commended his team mates, stressing their determination and resolve to stay on the winning streak.

Also speaking Kaduna Polo Club President, Abubakar Suleiman while commending FirstBank of Nigeria Limited for their support, urged the bank not to waver in the resolve to continue to make history with Kaduna Polo Club.

“Firstbank deserves all the commendations; they have been with us from inception and have been very consistent.

“The 2020 edition of this event is the 101 edition of their sponsorship. This feat is very rare in this part of the world and that is why we should all encourage and support them so that they can continue to back us”, Suleiman stressed.

Tournament sponsor, FirstBank while pledging their continued support for the competition, said they will forever cherish the relationship that exists between the club and the financial institution.

The Emir of Kano, Aminu Ado Bayero, Alhaji Lawal Kankia, Alhaji Usman Nagogo were amongst some of the royal fathers and dignitaries who graced the finals.