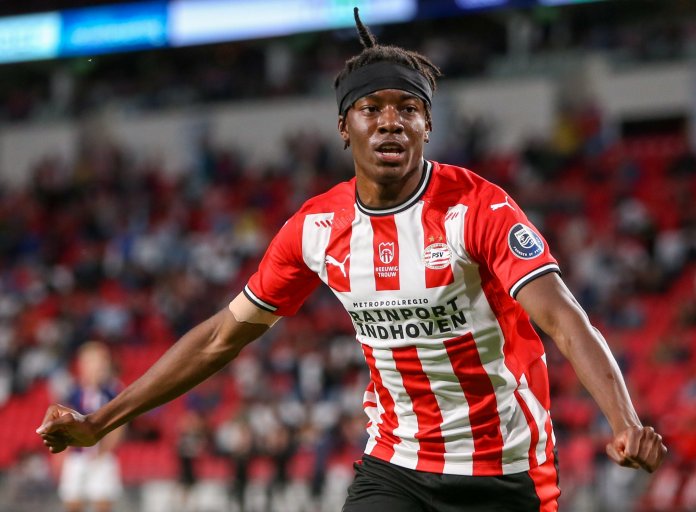 With the bulk of Super Eagles players made up of Europe-born Nigerians in what the country’s football administration described as ‘VIP Scouting’, another English-born may be joining the senior national team if the federation could have its way. The Nigeria Football Federation is hoping to prise away Noni Madueka-an English player of Nigerian descent-despite that the18-year-old had starred for England at the age-grade category, but the former Tottenham player is still at crossroads as to where his international future lies

The Nigeria Football Federation (NFF) is planning another ‘coup’ against England as the federation is looking to prise former Tottenham wonderkid, Noni Madueke away from the England set-up after he rose to stardom by snubbing Manchester United and excelling at PSV Eindhoven.

The former Spurs forward has emerged as the latest youngster to star abroad. He has scored four times and set up four goals in just 11 appearances for PSV Eindhoven.
Madueke has represented England at youth level, in both the U-16s and the U-19s.
The 18-year-old is the latest target for Nigeria in their attempts to convince dual nationality English players to switch allegiances.

Madueke has played for England from U-16 up to U-19 level and has emerged as the latest British youngster to star abroad.
But he is also eligible for Nigeria through his parents and they want to tempt Madueke by handing the teenager a senior international call up.
Madueke left Spurs to join PSV in June 2018 – rejecting Manchester United in the process and impressed for their youth sides before making his senior debut last season.

This year looks set to be Madueke’s breakout campaign after his stunning start in the Eredivisie and Europe.
The 18-year-old has scored four times and set up four more goals in just 11 appearances for PSV.
Though only three of those appearances have been starts and he displayed his potential once again with a two-goal performance off the bench in PSV’s 4-0 win over Den Haag last Sunday.

Nigeria’s interest however represents a dilemma for Madueke. While his form in Holland could earn him a promotion up the England youth ranks, perhaps to Aidy Boothroyd’s U-21s, Africa’s second-highest ranked nation want him for their first team ow.
Nigeria’s readiness to fast-track talent has proved a successful approach and helped them persuade former England youngsters including Ola Aina, Alex Iwobi and Victor Moses among many others to change who they represent at international level.

Madueke had previously explained that he snubbed United, while Chelsea and Celtic were also interested because German Bundesliga star, Jadon Sancho has proven that English youngsters are now often better off abroad when seeking a breakthrough.
“Sancho has opened the eyes to other talents,” he said. “A year after him, I went from Spurs to PSV. The plan that I had in mind then is now working out the way I intended it.

“In England, it is very difficult as a young talent to get into the first team, especially at the bigger clubs. The squads are very large and there is little room for youngsters. They often stay in reserve teams for a long time or are loaned out.
“There is little flow or chance to break through. That is completely different in the Netherlands.”
According to the Daily Mail, the PSV Eindhoven talent is in the middle of a tug of war between Nigeria and England.
His form has not gone unnoticed in Nigeria and NFF officials are hoping to convince the forward to choose an international future with them.

Madueke was born in England and has represented them at various youth levels. However, Nigeria hopes to lure Madueke by offering him a call-up to the full national team, while he is not yet in the running for a full England call-up.
Tottenham Hotspur have seen the likes of Harry Kane, Harry Winks and Japhet Tanganga become first-team players having been in the youth ranks, but some players have had to move on.

Not everybody can become a star like Kane, and may well feel that leaving Tottenham’s youth ranks for first-team football elsewhere is their route to prominence.
One such case came in 2018, as Madueke decided to leave Tottenham for a shock move to PSV Eindhoven, picking a move to the Netherlands over a long-term stay at Spurs.
The speedy attacker can play out wide, as a number 10 or up top, and looked to be a major miss for Tottenham when he chose to move on.

Now, Madueke, who is still just 18 i s playing for PSV’s first team, and he has enjoyed a blistering start to the season over in the Eredivisie.
In six league appearances this season, Madueke already has two goals and three assists to his name, making himself a star for the Dutch giants.

Coach Roger Schmidt appears to have taken a shine to Madueke, and is giving the teenager plenty of playing time despite having a host of other attacking talents at his disposal.
Spurs fans may now fear that Madueke will become the new Sancho, in terms of him being a speedy English wide man who heads off to Europe in search of playing time before becoming a sensation.

Things could yet get even worse for Tottenham as there are reports back in January that Arsenal want to bring Madueke back to North London.
Seeing Madueke shine in the Netherlands is bad enough, but if he ends up coming back to England – especially with a London rival then Spurs will be left cursing his decision to leave back in 2018.