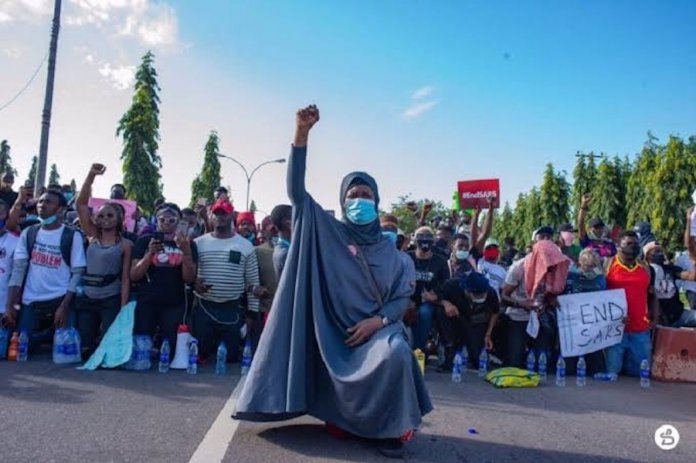 The Lekki Toll Plaza shooting reveals a shoddy handling of the curfew imposition and the liaison with the military high command, argues Kunle Jenrola

At no time, in recent memory, did the resonance and timbre of the song: “Nigeria go beta” strike a more impelling and inspiring note than at the outset of the “ENDSARS protests”.

A throng of citizens, across age, gender and etho-religious brackets, welcomed the protests as a disinterment of blighted hopes in many spheres of national life. Many thought that with the youths, the “natural drivers” of societal change in the saddle, Nigerians would fare better than the musical proposition:”My pipu go survive” .

This feeling was as compelling as overwhelming even in the wake of the harsh realities of personal discomfort and revenue losses occasioned by the street blockade colouration of the agitations. Indeed, it seemed plausible that after a spontaneous government response,the #ENDSARS rally against police brutality, had gained as much traction as to revamp optimism that Nigerians could secure prompt government attention to, and resolution of, nagging political issues such as restructuring, unemployment and other forms of social malaise.

And, with the exceptionally peaceful conduct and organisational ability of the youths accentuated by the passionate presentation of their grievances, fund -raising activities and articulation of a five-point demand greeted with an acquiescence that belied government bureaucracy; the season of truth had arrived.

This flush of a truly patriotic youth movement, their dexterous use of the Social Media power and the pleasant surprise of a responsive government provided the crest on which the optimism for a better Nigeria would ride. Yet, truth which is the template for trust, hope and optimism cannot stand the test of time until it has passed through the crucible of public interrogation.

These issues came to a head midway into the 13-day protests as the will of the youths to press home their demands amidst countervailing events and the indivisibility of truth came under the spotlight. Instantly, truth was challenged when the youths had to deal with the threats and distractions of “a prolonged street” protest laden with the fear of a hijack or corruption of their ideals through state-sponsored or misguided infiltrators.

To protect the genuineness of their enterprise, they contracted a private security outfit to make up for the nonchalant and lukewarm policemen who allegedly refused to take custody of petty thieves caught by protesters at the Lekki Toll Plaza. But, like the Shakespearean “two truths”, they had to find a delicate balance between the guarantee of the streets to ignite a bandwagon effect through an unfettered access to the court of public opinion, on the one hand and a necessity to keep a tight lid on a quivering pandora’s box, on the other.

In the meantime, the two extremes of youthful nature were finding expressions in the passionate, intellectual and suppositious peaceful protesters pitched against the infuriated, impulsive and disingenuous agitators, aka miscreants.

The next couple of days would see the former group at the crossroads of strategy clot, where they seemed stuck; while the latter was well nigh “surfing” on the slippery slope to vendetta, booty-hunting and anarchy.

The ugly truth or, better still, the ruse, of a cognitively dissonant youths popped up in this other group. They unleashed terror on the nation- especially on Lagos:- burning, looting, maiming , murdering and carting away arms on such a scale that herded over 500 suspects into police custody.

Soon enough, the anger of this columns of youths in states as far afield as Adamawa, Kogi , Kwara and Enugu stoked the hunger and perverse opportunistic tendencies of a large army of sedentary citizens beyond gender and age classifications and a looting spree of public warehouses was fashionised.

There’s a reality that should not be veiled by crass criminality in these lootings. Without attempting to apply a moral justification to a “mortifying mischief”, the brutal truth of the looting of CaCovid consumables resides not only in its condemnation but also in the sloppiness or outright avarice of those responsible for the distribution of those items.

The fact that the mobs went after these warehouses with utmost dispatch could only reinforce the suspicions that the goods had been kept a little longer than necessary and, one can even surmise, that those who attacked the stores were either disgruntled officers or underpaid/unpaid labourers engaged to stack up the wares. Surely, only angelic hosts could resist the temptation of helping themselves to food in the face of scarcity.

It could be a ruse of the Nigerian ethos to imagine that some items were already being spirited out of the warehouses for sale in the open market by official custodians. In this miasma of looting, wanton destruction and death spun by the irate youths, the music of hope yielded space to a beat of despair redolent in “Nigeria jagajaga”!

This brings to mind the classification of “Gazetter of the World”, that there are three types of individuals who are in rebellion against society: the neurotic, the criminal and the genius. The neurotic rebels against society in secret or unconsciously;” the criminal, openly and the genius, by his creative work, is able to sublimate his conflicts in arts and literature.” To be sure, the two classes of our youths are apparently accommodated within the criminal and genius echelons.

Yet, these developments that delineate the youths are, but a sad prologue to the “swelling act” of an ignoble theme: The Lekki Massacre or (“What You Will”).

Consider the truth of Lagos State Governor Babajide Sanwo-Olu’s multi -tasking efforts at mediating and pacifying the protesting youths, the avenging youths and other Lagosians on the sideline.

Even without betraying fatigue, he cut the unenviable image of someone who may not have had a wholesome sleep since the outbreak of the Coronavirus pandemic in March. His reward: more sleeplessness;- courtesy of the ENDSARS protests.

Impressively, Gov Sanwoolu called up all his communication and negotiation skills, horned his empathetic nature and fine-tuned his humble nurture during those heady days. Perhaps, he needed to keep abreast with the fine points of Emergency Communication (EmergenCom) to be completely atop how to communicate under pressure.

The Lekki Toll Plaza shooting on that “Black Tuesday” of October 20 and its aftermath reveals a shoddy handling of the inevitable curfew imposition and his liaison with the military high command. You see, in EmergenCom, the elements of Consistency, Coordination and Timeliness are as important as the quality and quantity of the information dished out.

For instance, in communicating the imposition of a curfew, the pressure and weight of office apparently took toll on his empathetic nature replete in the confusion of the commencement first announced as 4:00pm and later extended to 9:00pm. Given the fact that most interlocutors are hearing but hardly listening in crisis situations, there’s no room for equivocation. A pinpoint accuracy and consistent flow of information quality and quantity is a non-negotiable requirement.

With the soldiers beginning their execution of the curfew before 7:00 pm- two hours before the official take-off time, it was obvious that the timing and operational tactics of the soldiers “he invited” to enforce the curfew at the Lekki Toll gate was faulty.

That gaffe made the governor’s coordination skill a worse culprit than the switching off of the lights at the “crime scene” and the shooting itself. A lack of coordination among all responders has been known to endanger credibility during emergencies- just as the incident in question portends.

Indeed the spin being given to the story about the grievous intent behind his “call up “of the army would have died a natural death on arrival due to the indisputable fact that he does not possess the power of deployment of the military. One might even wonder why the army made a bone of the governor’s invitation when honouring the invite was purely discretionary and not obligatory. Could that reaction from the army have been a payback of the governor’s initial submission that the presence of the soldiers on the scene was a product of “forces beyond my control”?

In any case, he had earlier stated that he was in touch with the military high command which had promised to render help if needed; even as they (the military) had readied themselves tactically with “Operation Crocodile Smile.”

The role and conduct of the soldiers present, perhaps, the most egregious face of the truth. The veracity or falsity of the reported fatalities by Amnesty International and counterclaims by the Nigerian Army/government notwithstanding, their intent to intimidate and brutalise the peaceful protesters was evident, ab initio.

In spite of their vehement denials that they killed any protester, their complicity in any deaths that may have occurred resides in the mindless execution of their brief. How can a group of uniformed men kitted with taxpayers money release a staccato of gunfire televised live , on unarmed civilians for over an hour and expect exculpation from allegations of murder? Do they not know that a stampede and fright induced by such an action was a potent death merchant?

How can nerves be calmed because blank, non-lethal bullets were fired.? Isn’t this a sufficient ground for a vicarious liability and an actionable indictment?

In all of these, the grapple between the truth and falsehood was evident in the use or abuse of the Social Media during the epoch in review so much so that all the galvanising attribute in the early days of the protests was trifled by its inordinate usage by unscrupulous youths at the end of day.

Jenrola, a veteran journalist and communications consultant, wrote from Lagos