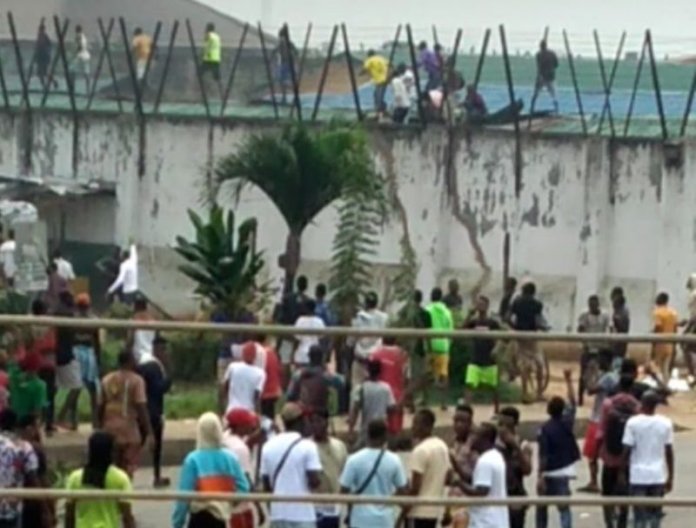 *Yet to ascertain number of escapees

Following insinuations on how inmates escaped from the Benin and Oko correctional centres Monday morning based on scenes from videos recorded during the jailbeeaks, the Nigerian Correctional Centre has said that #EndSARS protesters were responsible for the jailbeeaks.

The correctional service said that the claim that the protest was peaceful was also false.

A statement signed by the spokesperson of the Centre, Mr. Augustine Njoku, said the exact number of escapees and casualties were yet to be confirmed adding that it will be communicated after preliminary investigations.

He said while efforts were underway to arrest the situation and restore normalcy at the Centres, the armed squad personnel of the Service was working tirelessly to bring the situation under control.

He added that the Service was however, calling on all Nigerians with useful information that will lead to the recapturing of fleeing inmates to report to any nearest Custodial Centres, Police station or any other Security Agency.

The statement read: “This is to inform the general public that the Nigerian Correctional Service (NCoS) Custodial Centres at Benin and Oko in Benin City were attacked this morning by suspected protesters under the #ENDSARS protest, freeing inmates legally interned by courts of competent jurisdiction in Edo State.

“This is unfortunate as this does not portray the peaceful, no violence, no destruction mantra hitherto presented by the #ENDSARS protesters.

“The exact figures of escapees and casualties are yet to be confirmed and will be communicated after preliminary investigations.

“Efforts are underway to arrest the situation and return normalcy back to the Centres. The Armed Squad Personnel of the Service is working tirelessly to bring the situation under control.

“The public is therefore enjoined to go about their businesses in a peaceful manner, resist and shun attempts of being used to destabilize the peace in the state by destroy individual and public institutions.”

Furthermore, he said the Controller General of Corrections, Mr. Ja’afaru Ahmed under the supervision of the Minister of Interior, Rauf Aregbesola, had commenced the full implementation of the Nigerian Correctional Service Act, 2019 signed into law by President Muhammadu Buhari which provides for far reaching reforms in Criminal Justice Administration in several areas.

He said these include: “Massive and continuous decongestion of Custodial Centres across the country where more than 10,000 inmates have so far been released, upgrade in infrastructural facilities in NCoS with the construction of a 3,000-capacity custodial centres in each of the 6 geopolitical zones of the country and the rehabilitation of existing ones.

“Upgrade in the logistics capability of the Service and so far more that 450 operational vehicles has been procured to ensure speedy dispensation of justice and the implementation of the non-custodial measures as provided in NCoS Act, 2019 whereby inmates can be sentenced to various terms of community service where they are not confined in the custodial centers to serve their sentences.”

He added that the present administration was committed to securing the lives and properties of all Nigerians and will leave no stone unturned in ensuring adequate dispensation of justice for all.