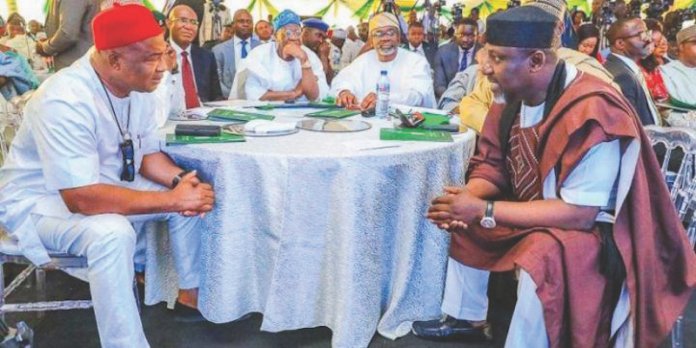 Reactions trailing the outcome of the Judicial Commission of Enquiry on Contracts Awards from 2011 to 2019 in Imo State send curious signals, writes Amby Uneze

In August 2019, then Imo State governor, Hon. Emeka Ihedioha instituted a Judicial Commission of Inquiry on the awards of contracts in the state from May 29, 2011 to May 28, 2019.
The chairman of the Commission was Justice Benjamin Iheka, with other members like Chris Ibeh, Ifeyinwa Maureen Okafor, Dr. Samuel Ifeanyi Onwuasoanya, Stanley Imo, Mr. Paschal Uzokwu and Aloy Ejimako, while Dame Comfort Obi was to serve as the Secretary.

Uzodimma, who announced the renewal of the mandate of all the investigative panels and judicial commissions of inquiry set up by his predecessor after meeting with the panelists, explained that the decision was in keeping faith with his Three Rs mantra of Rehabilitation, Reconstruction and Recovery.

Justice Iheka affirmed that, “By the law, under which the Commissions and Panels were established, only a renewed mandate, which the governor has now done, after our first three months, validates the lives of the Panels and Commissions.”
By then, Justice Iheka, who confirmed that his commission had finished taking evidence from all petitioners/claimants stated: “We have started inviting all government functionaries that played any part in the contracts awarded within the period under review. They are expected to start appearing before the Commission from Tuesday, February 11, 2020.”

Recall that in renewing the mandates of the Panels and Commissions, Uzodinma had said: “I acknowledge that government is a continuum. This administration will not go into witch-hunting, rather, will continue from where the previous administration stopped particularly in areas that will impact positively on the living standards of Imo people.”

Notable among the Committees, whose mandates were renewed were the Judicial Panel on Lands and Related Matters headed by Justice Ijeoma Ogugua; the Visitation Panels for Imo State University, Teaching Hospital Orlu, Imo State Polytechnic Umuagwo, and the Committee for the Investigation of Local Government Administration from 2011-2019, headed by Chief Eze Duruiheoma, SAN, among others.

Governor Uzodinma charged the Committees to “continue with the good job you are doing for Imo State”, stressing that, “In our little way, we shall encourage you to turn in an objective report that will meet the yearnings of the good people of Imo State.”
While the Judicial Commission on Contracts awards sat and invited many people to testify, several invitations were sent to former governor Rochas Okorocha to defend numerous petitions against him and his eight-year administration but he did not bother to answer the commission’s invitation for once.

The generality of Imo people believed that Okorocha’s administration was careless with frivolous awards of contracts. Even while he was governor, there were many petitions against his government and those of his cronies in government. Maybe, they did not realise that a day of reckoning would come and he would cry wolf. That period is, perhaps, now and he might not have any hiding place except court to seek for redress, at least, to clear his name.

However, the outcome of the commission’s report was not surprising, considering the lackadaisical manner Okorocha’s administration awarded contracts in the state during his tenure.
The report was submitted to Governor Hope Uzodimma with such recommendation, which exposed those, who played key roles in contract awards that turned out to be a scam to the tune of N106 billion.

Submitting the report during the week at the Executive Chambers, Government House, Owerri, Justice Iheaka explained that, “There were monumental fraud that were orchestrated by the contractors in the period under review with strong collusion with some civil servants, who helped in the fraud, which was evidenced in over-pricing of the value of the contracts executed in the state.” The report claimed that there were flagrant disregard for due process and the rules of Bureau for Public Procurement Act, which was exhibited in the “outrageous contract pricing and shady contract executions as well as payment for non performing contracts.”
Justice Iheaka also said there were evidence of non-existing and phony companies that were used to siphon government’s funds to the tone of N106 billion.

A clear example of such phony companies was one Messrs Zigreat of Ugbelle Street, Ideato South. This particular company with no fixed address and without proven directors handled several contracts for the state government to the tune of several billions of Naira. Up till, now no one has been identified with that company, yet, it handled contracts running into billions.

He therefore appealed to the governor not to sweep their report and recommendations under the carpet, but to do whatever possible in his power to ensure that those indicted were made to return the monies.
The Commission has therefore identified some civil servants, who were honest, dedicated and resisted every pressure by the contract scammers to use their offices to defraud the state in the period under review.

Receiving the report, Uzodimma too has assured the people that all those indicted and identified in the report as having played a role in frittering away public funds through criminal ways will be made to return them. He said the opportunity would be given to them to return the monies as the state is in dire need of funds to deal with pressing developmental issues in the face of dwindling resources.
The governor however hinted that in a few days, government would set-up a Review Committee to look into the documents submitted by the Commission and produce a Whitepaper that would give Government the actual direction to follow in implementing the report in full.

Noting that the mood in the state indicated that the people wanted to know what government would do with the report and others before it, he reassured the Chairman of the panel and others that much as government would not witch-hunt anyone unnecessarily, it would definitely not shy away from implementing to the letter, the recommendations on those that willfully fleeced the state of her scarce resources to serve as a deterrent to future criminals.

He commended the members for taking time to do a thorough job considering the intricacies in their assignment, which warranted their visiting project sites and asking difficult questions, saying, “Government will surely show appreciation for their sacrifices.”
But, while responding to the commission’s report, Okorocha challenged the government, to publish the Iheaka report verbatim, so that Imo people in particular and Nigerians in general, could read the report and see how the Panel arrived at N106 billion, which they said he should refund.

Okorocha, whose reaction was made possible through his Media Aide, Sam Onwuemeodo noted that no serious panel would have made such recommendations.
“It could only take a “Ben Johnson” Panel to do that. And let the government publish the list of Contractors, who handled contracts under Okorocha, State the Contracts they did, how much they were paid respectively, how they were paid and what they should have been paid, in the estimation of the Panel members”.

He challenged Uzodinma “to explain what he has done with the N119 billion he has collected from the federation account and N6.4 billion ISOPADEC fund, vis-a-viz the IGR. The former governor insisted he came through the “Ben Johnson” way and that since January 14, 2020 when he came on board, all his actions and utterances have been “Ben Johnson” way”
Picking up the argument for the government, Media Assistant on Prints to the Governor, Modestus Nwankpa noted that instead of Okorocha apologising to Imo people for allegedly fleecing the treasury, he presented a mockery of defence.

According to him, the Justice Benjamin Iheka Judicial Panel, was not instituted by Uzodimma, but by Ihedioha and that the Panel was made up of highly reputable personalities, reason their actions, inactions and report were devoid of political colouring.
“The Panel extended invitations to Governor Okorocha for more than five times in the spirit of fair hearing but the former governor refused to attend. He rather ran to Court to stop the panel, which did not materialise, noting that the panel did a thorough and commendable job and their report have been described as among the best and well investigated report in Nigeria. “Governor Uzodinma did not have any hand nor did he influence the outcome of the report of the panel, at least, everybody knows the strong characters or personalities in the Committee. We know that Justice Iheka, Comfort Obi etc are not people one can bribe or influence.

“The Panel relied heavily on facts not fictions in reaching their conclusion. So many people including civil servants, contractors and stakeholders approached the panel with evidence concerning contract awarded. Journalists, who covered the proceedings, were marveled at the startling revelations at the panel proceedings.

“Even some of Okorocha’s former appointees also indicted the him during their cross examination. The panel also submitted their evidence and documented facts alongside the report for better understanding of how they reached their conclusion”, he stated.

At this juncture, it is more instructive to comment on the submission of the panel than Okorocha’s defence, which to many, lacked merit. What Imo people are saying is that the former governor needs to account to them a whopping sum of N106 billion, which the commission allegedly found missing during his eight-year tenure as governor, according to the documents and presentations they obtained from the people and government records.

But telling the people a cock and bull story is rather unfortunate. Why did he fail to submit himself to the commission to answer all that the commission sought to ask him? Again, what the Imo people want at this period is to ensure that the right thing is done so that whoever fleeced their money would be made to face the music, squarely.