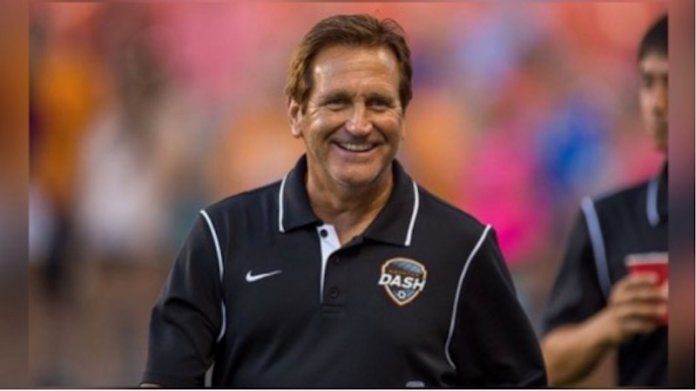 President of Nigeria Football Federation, Amaju Pinnick, has lived up to his promise of acquiring the services of a world-class manager for the Super Falcons after seasoned coach- Randy Waldrum was on Monday named as the coach of the Nigerian senior female team. But the fact that the American will still retain his job as head coach of Pittsburg University women’s team, meaning he would not reside in the country, the same condition that led to the non-renewal of the former coach of the team-Florence Omagbemi’s contract, who led the team to victory at the 2016 African Women’s Nations Cup in Cameroon
however leaves much to be desired

The Nigeria Football Federation (NFF) on Monday confirmed American Randy Waldrum as head coach of the national women’s team of Nigeria, Super Falcons.
The Falcons have been without a substantive trainer since Thomas Dennerby left his position after the team’s Second Round ouster at the 2019 FIFA Women’s World Cup in France.

Waldrum is expected to team up with a retinue of local coaches including former Super Falcons’ goalkeeper and Captain Ann Chiejine, who will serve as the first Assistant Coach, while Wemimo Mathew Olanrewaju will serve as the second Assistant Coach and Auwar Bashir Makwalla will be goalkeepers’ trainer.
Pitt’s Randy Waldrum will mentor soccer players on two continents when he begins his duties as coach of the Nigerian senior women’s national team.

“Very excited to head up the Nigerian women’s national team and look forward to working with this amazing team! Gives me a chance to reconnect with some of the players I know! Big thanks to Pitt for allowing me the flexibility to work with them,” he tweeted.
Waldrum, who has been Pitt’s women’s coach since 2018, will lead the Nigerian Super Falcons in its quest to qualify for the 2023 World Cup. It is however still unclear when he will begin coaching in Nigeria.

“I’m very excited to be appointed to coach the Super Falcons,” Waldrum said in a statement. “I can’t wait to help them qualify for the World Cup. Also, I’d like to thank (Pitt director of athletics) Heather Lyke for allowing me to do this and understanding the benefit for the Pitt women’s soccer program.”

This season, Waldrum has led Pitt to a 6-2 overall record, 1-2 in the ACC.
The NFF president is hopeful the new coach will help the nine-time African champions become a global force in women’s football.
“We envision a new Super Falcons squad competing favourably for laurels at the global level, and I believe the new technical crew led by Mr. Waldrum can take us to that level,” Pinnick said.

Deep concerns emerged over the American’s terms of engagement with Nigeria hours after the University of Pittsburgh hinted he will retain his headship role with Pitt Panthers.
However, the former coach of Houston Dash and the University of Notre Dame has immediately moved to declare his full-time commitment to guiding the team to long-term success.

“I want everyone to know that I am extremely excited about being your coach for the Super Falcons,” Waldrum told Goal.
“It’s been a dream of mine for some time now. I appreciate Mr. Pinnick and his faith in me and our staff to bring the Super Falcons to new heights.
“I also understand the full commitment that it takes for my time, for training camps, games, scouting, player management, staff development, and of course team development.
“These expectations are very clear and I’m anxious to get started. In fact, I will be the one pushing the federation for more opportunities to prepare and train, I’m quite sure.

“I’ve already been working and have a 10-year plan I’m anxious to share with the federation in order to prepare our young players in the country now for future years as national team players.
“Our stars of the 2027 and 2031 World Cups are between 10-12 years old currently, so let’s get them in the proper environment now.”
It would be recalled that United States-based former Super Falcons handler, Omagbemi turned down an offer by the NFF to return to the team’s technical crew after she was asked to relocate from the United States to Nigeria. In spite coaching the Super Falcons to winning the 2016 African Women’s Nations Cup trophy in Cameroun, the NFF refused to renew her contract.

Omagbemi, who captained the Falcons for 16 years, was also once an assistant coach of the Falconets.
The African champions were scheduled to face Niger or Togo in June to earn a qualification ticket for AWCON, but CAF postponed the qualifiers due to Coronavirus pandemic.
Pinnick confirmed then that the process of recruiting a top tactician was ongoing while he also blamed the delays on the Coronavirus pandemic.

“We ought to have done this by now because like I said, it is out of our hands now,” he said on Channels TV.
“We contracted PwC as a consultant to advertise and get us a world-class coach and they were in the process of doing that before the Coronavirus started.
“We had given them a deadline. We wanted them to appoint a coach before the end of April, so that the coach could start work immediately.

“The good news is that we have a lot of coaches that have shown interest if I mention their names you will be shocked, but I won’t. We will give Nigerians the best.”
It now remains to be seen whether the choice of Waldrum is the best for Nigeria, as anything short of a victory at next year’s AWCON and a semifinals berth at the World Cup would not be acceptable by sports-loving Nigerians.