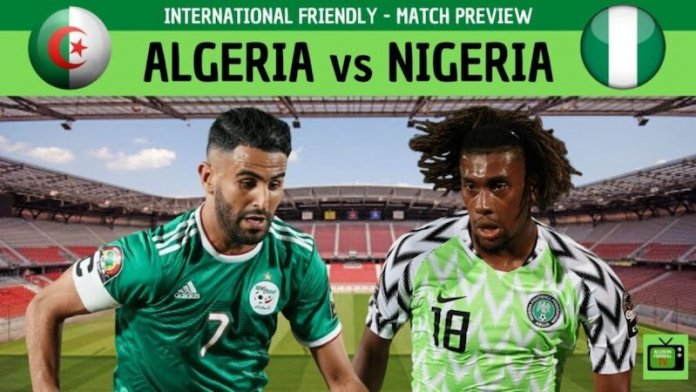 Super Eagles of Nigeria’s hope of revenging their 1-0 loss in the semifinal of the 2019 Africa Cup of Nations in Egypt suffered a setback as Algeria defeated Nigeria in yesterday’s
international friendly encounter in Austria, thanks to Ramy Bensebaini’s lone strike in the opening 10 minutes.

The Borussia Monchenglabach defender fired the reigning African champions to victory at the Jacques Lemans Arena after pouncing on a loose ball from a corner-kick in the sixth minute.
FC Midtjylland midfielder Frank Onyeka was handed his debut appearance in the middle of the park while Porto left-back Zaidu Sanusi made his bow for the team.

Algeria, on the other hand, were led by Manchester City playmaker Riyad Mahrez and Metz midfielder Farid Boulaya made his debut.
A few minutes after Bensebaini’s opener, Everton’s Alex Iwobi tried to equalise for the Super Eagles after a fine team movement but his effort went wide off target.

William Troost-Ekong led Gernot Rohr’s side in Austria as Ahmed Musa started from the bench, however, the new Watford signing received the first yellow card of the encounter after bringing down Brentford’s Said Benrahma in the 26th minute.

In the 35th minute, Sparta Rotterdam goalkeeper Maduka Okoye was forced to make a fine save off Mahrez’s free-kick after the Man City playmaker was brought down by Sanusi just outside the penalty area.

Nigeria’s brightest chance in the opening 45 minutes came three minutes later, with Sanusi linking a cross to Onuachu in Algeria’s box but the Genk striker’s effort was parried away for the corner by goalkeeper Alexandre Oukidja.
Algeria preserved their lead into the break but Benrahma was shown a yellow card for a late challenge on Samuel Chukwueze on the stroke of half-time.

Nigeria were forced to make their first substitution immediately after half-time due to an injury to Samuel Kalu, who was replaced by Nantes winger Moses Simon.
Just after the technical changes, Tyronne Ebuehi hit a shot from outside the penalty area but it went wide across the face of goal.

The Benfica loanee was next to go off for German-based defender Kevin Akpoguma to make his Nigeria debut in the 67th minute, while Kelechi Iheanacho replaced Onuachu.

Rohr’s men intensified their efforts for an equaliser as Ahmed Musa was introduced in the 75th minute for Chukwueze but they could not hit the target.

Meanwhile, former Golden Eaglets captain Samson Tijani was thrown into the fray to make his Super Eagles debut at the age of 18 as an 85th-minute substitute for Iwobi.
After yesterday’s loss, Nigeria will turn their attention to their second international friendly encounter against Tunisia on Tuesday.

They will be hoping to secure a win before their double-header AFCON qualifiers against Sierra Leone in November.
Speaking at the post-match, Nigeria manager Gernot Rohr said that he will take some positives from the defeat to Algeria.
“This is a very good test for us. There are positives to pick from a tough game like this,” Rohr said.

“Now we have to recover well and start to plan for the next game on Tuesday against another tough team”.