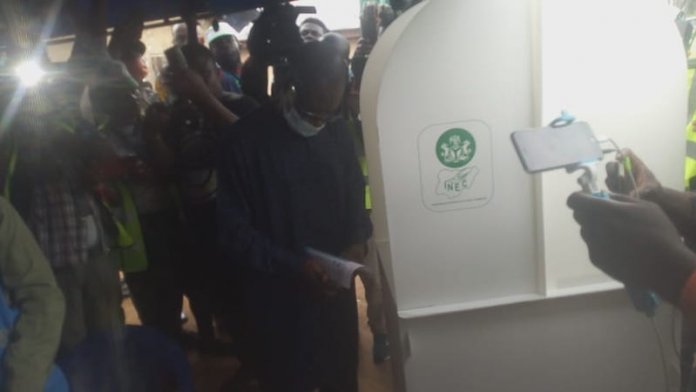 Ajayi who was in high spirits disclaimed the rumour that he had stepped down from the governorship race. “They have seen clearly that it is me that the people want. I am going to win this election. They are trying to discourage. This is the handiwork of people who constantly engage themselves in futility. People are already voting for me. It is me they want to vote for.”

Though the turnout was not as large, voters turned out early to meet officials of the Independent National Electoral Commission (INEC), who were waiting with materials in many polling units visited across Irele, Ese Odo and Ilaje local government areas of the state.

At Ajagba Ward 1 Unit 005, the Presiding Officer, Mr. Paul Akingbade explained the rules of engagement in Yoruba to voters who were already on the queue as early as 8:00am
A common trend observed at many polling units across the local governments was non-compliance with COVID-19 protocols. The social distancing rule was observed in the breach, while use of face mask was not made compulsory.

Although 17 political parties were on the ballot, only three, All Progressives Congress (APC), Peoples Democratic Party (PDP) and the Zenith Labour Party (ZLP) were conspicuous. Their agents were present at Polling units and kept a keen eye on the electoral process.
Mr. Donald Ojogo, Ondo State Commissioner for Information and Strategy, voted at his homestead at Arogbo Ward 1, Ojogo Unit 15. He explained why it was difficult to adhere to the COVID-19 protocol of social distancing.

“When they hold their rallies do we observe social distancing. All the same let us pray to God for these season to be over. You can see the eagerness of the people to cast their votes. From what we have observed so far the excise will go without hitches. I must however say that INEC and the political parties need to carry out a lot more voters enloghtmenmet programmes. Once you see an infringement on the part of the agents, other factors will creep up and if care is not taken, matters may get out of hand. What we have seen so far is encouraging and the entire exercise will be adjudged credible.