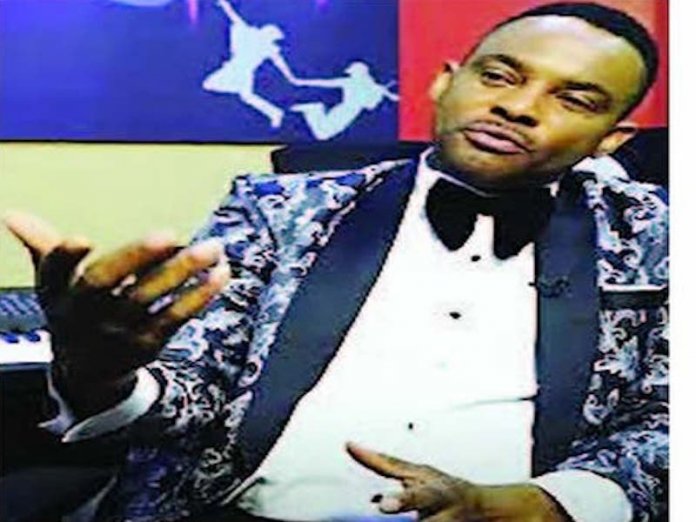 The President of Performing Musicians Employers Association (PMAN), Pretty Okafor’s mission to restore structure and confidence in the musicians union has not been a smooth ride, yet he is unfazed by the constant attacks and threats, writes Vanessa Obioha

Since the lockdown began in late March, Pretty Okafor has not stepped out of his house. Even when it was temporarily lifted, the musician and President of the Performing Musician Employers Association of Nigeria (PMAN) has yet to see the busy streets of Lagos.

He doesn’t miss the hustle and bustle of the city, he says. He is sporting a white, patterned shirt, his hair twisted in locks. He hasn’t been to the barbershop in a while.
Perhaps, because he is an introvert, he finds the isolation comforting and productive. He spends most of his time in his office (at home), working tirelessly on his numerous projects and holding more meetings than during the pre-COVID times. The only time he comes out is when he is bored. By now, his family is accustomed to his long hours of work. They are however compensated by the bonding time they share with him afterward.
Seven years ago, Okafor predicted that the world was shifting to a digital space, the mobile phone precisely. Nobody paid him any attention. They called him a madman. Today, his prophecy is heightened in the pandemic.

“You can purchase any goods or services from your phone. It’s one place you make orders and they bring it to your doorstep, be it food or clothes,” he says. We watch current news on our phones, we watch TV and listen to the radio on our phones. We haven’t been able to go out for five months but we have been communicating. So you can do everything via your phone.”

While the capricious coronavirus pandemic may have rattled a lot of people in the music industry, Okafor is unperturbed. He and his team are prepared for times like this. However, he is pained that the music industry could not tap fully the opportunities presented by the pandemic.

“If we have gotten it right, this period would have been the best time for musicians to start making more money, make a more realistic gain when it comes to royalties,” he acknowledges. “Though it didn’t catch us unaware because we already have some structures in place.”
The good news however is that the pandemic has increased the interest of the corporate bodies in the creative industry.
“The corporate bodies are even sponsoring any online campaign or project. They sponsor comedy skits and run their ads on it. So, it is the creative economy that is creating more content now. I tell you what,” he continues, leaning closer to his camera to drive home his point. “Without the creative industry, corporate bodies are not going to make N1.”

Then, he points out: “It has come to a level where everything is done on the phone. We carry out transactions, buy, sell, and engage people with our products on the phone. In the past four months that the country has been on lockdown, I haven’t stepped out of the house.
“I have not seen any billboard, electronic display unit, or mobile BRT ad. Who is buying it? The brands are looking for space on your phone. From Instagram, Facebook to TikTok, without the creative content, they cannot sell. So the corporate bodies cannot operate without the creative economy but yet we are not recognised in the country.”
He revealed in a 2017 interview with THISDAY that the creative industry in Nigeria is worth N9 billion.

In the same vein, he presaged that the economy was going into recession in 2015. By 2016, the federal government announced that the country was indeed slumping.
Despite his vaticinations turning to reality, Okafor would not label himself a clairvoyant. His prescient nature, he says, is based on facts and research.
“I look at trends, connect the dots, and see what is obtainable in the future. It is not rocket science but it’s baffling that not everyone sees it. My wife and daughter once said I’m a prophet because of the way I analyse and predict things but I don’t think I’m that.”

His uncanny attention to detail led him to discover the shady deals in PMAN as well as the Copyright Society of Nigeria. He raised the alarm on the stolen properties of PMAN by members of the union under a false identical name, Performing Musician Association of Nigeria.

In March, Okafor disclosed that recent reports from the auditing firm, KPMG revealed that COSON collected over N1.1 billion in royalty and licensing fees from users in 2017 but distributed only N225 million to holders, while over N800 million is unaccounted for.
The infighting in COSON and also with other Collective Management Organisations (CMO) and regulatory bodies in the music industry has grabbed headlines for too long. On one side are those who are in support of Tony Okoroji, the embattled chairman of the CMO.
On the other hand are the group of directors including Efe Omorogbe, accusing Okoroji of misappropriating funds. There is also the long battle of legality between COSON and Musical Copyright Society of Nigeria (MCSN).

To be sure, Okafor clarifies the role of PMAN. “PMAN is a musician’s union. Whether you are a member or not, PMAN must manage and regulate your welfare.”
He further reveals that the union had no intention to be part of the infighting in COSON.
“It was after six months that we waded into the matter because we have given the parties involved time to settle their differences. There is someone who believes that he is a demigod and cannot report to anybody in the music industry, including the Nigerian Copyright Commission (NCC) which I ordered to take action against COSON. He sued everybody including me, not PMAN.

He understood that he cannot sue PMAN because PMAN owes COSON. I think that’s where he was advised wrongly because you can’t pick a fight with a soldier.”
With his gentle mien, Okafor’s introvert nature is often mistaken for cowardice. He is quick to remind anyone that he grew up in the ghetto where survival is a daily race and cannot be intimidated.

The more we talk about COSON, the more forceful his words.
“All we are asking him to do is to simply allow an external firm to audit what COSON has been doing in the past 10 years. If anybody refuses to do that, then that person is a crook, a criminal. When you do that, all hammers are going to come down on you and that was why COSON was proscribed at the tail end. They were not sincere and were fighting an unjust cause.”

Okafor traces the genesis of COSON’s divisive stance to its inception. He believes that if the young ones who joined Okoroji when he left MCSN to start COSON back in the day were aware of his manipulative ways, they would probably have left.

“Because nobody was checkmating him then, he is used to getting things done his way. He is used to driving propagandas and blackmailing people. He tried to kill MCSN so that COSON would be in charge of collecting royalties but it lost the battle at the Supreme Court when the court recognised MCSN as the only and authorised CMO in Nigeria. I think that’s what got Okoroji bonkers and he started misfiring left and right.

“I think my only crime with Okoroji is that I signed an order asking COSON to be audited by an external firm. I have never been intimidated by anyone, certainly not him. When he found out that I was a guru in marketing communications and his propaganda against me wasn’t working, he lost it. He went to Facebook to announce that he was suing me and I replied that I was suing him double the amount and waiting for him to serve me papers. He never served me any paper to date.

“Two years later, he is singing that he won a suit against me. What suit? Am I NCC that revoked your licence or MCSN that proscribed you? Right now, COSON is naked. They don’t have a licence to operate in Nigeria. Till the time they were proscribed, COSON has collected about N5 billion but cannot account for it.

“The directors noticed it and demanded an explanation, instead of giving them one, you sue them to court. If you are not a thief, why are you doing that? Meanwhile, MCSN submitted to the forensic audit as authorised by NCC.”
Apart from the royalties war, Okafor sees greed and insincerity as major blocks in the music industry.
“If you don’t have discipline, you will be selfish, greedy, and incapable of handling the public property.”

One of Okafor’s objectives when he assumed the role of PMAN’s president was to restore structure and faith in the union. To a large extent, he has achieved this. He takes pride in the newly released digital CMO by MCSN, GoCreate app which will manage the revenues from streamed works of artistes on any platform.
The app is similar to a barcoding technology he proposed a few years ago. Before it officially launched, the app has over 2000 registrations. In partnership with MCSN, Okafor is confident that musicians will benefit from it.

Sometime in 2019, Okafor considered leaving PMAN but his excos thought otherwise. They believed he is the bridge linking the old and new artistes and without him, the union would lose its relevance. More than once, his life has been threatened by many who sees his campaign for a transparent union as a hammer in their works.

But Okafor is unfazed, he admits he gets unpretty by insincerity and is determined to erase it from the union. Nevertheless, he reveals that his time in the union is ticking. He believes he is almost done with his mission. When will he take his bow? This year? Next year?
“Soon,” is the only answer he offers.