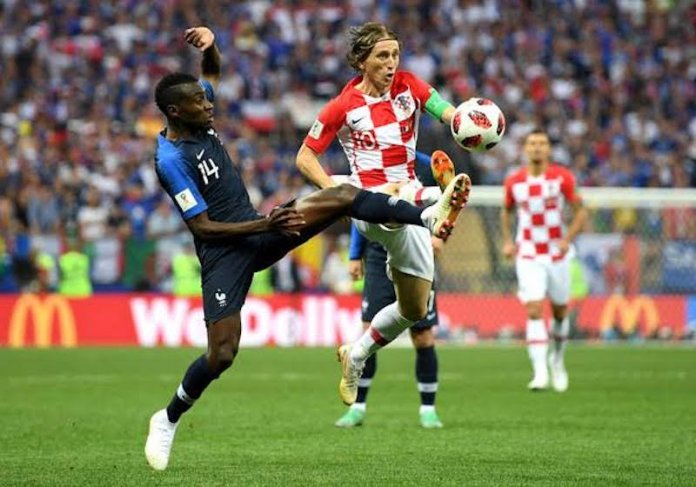 A little over two years after the World Cup final in Moscow, France and Croatia are meeting again tonight in the second round of UEFA Nations League matches in Paris this evening.

What should have been a festive full house at the Stade de France, a chance to relive the excitement of Les Bleus’ 4-2 win that July afternoon in Moscow, Russia, will be more downbeat, thanks to coronavirus.

European football body UEFA has directed that all the games be played behind closed doors.

The atmosphere in a stadium with no spectators will inevitably be flat and the teams on show will be markedly different as the coaches try to manage players who, because of the upheaval in the calendar over the last six months, are not fully fit.

“Already, playing 90 minutes with this deficit at the start is taking risks with the players.

“It may go against cohesion and my instinct but I think I have no choice.”

The Croats will be glad to welcome back their veteran midfield pair of Luka Modric and Ivan Rakitic who were rested for the 4-1 thrashing in Portugal on Saturday to be fresh for Paris.

That means Kylian Mbappe, who scored with France’s only shot on goal to beat the Swedes, is likely to be the highest-profile absentee.

Part of that is his fitness – the 21-year-old took a nasty blow to his right ankle which had barely recovered from a major sprain – and part of it is club/country politics.

Mbappe is expected to be in Lens on Thursday as Paris Saint-Germain, who have lost six players including Neymar to positive Covid-19 tests, make a belated start to their Ligue 1 season.

The promise and need for rotation may open some doors in Deschamps’ starting line-up.

Manchester United’s Anthony Martial, who returned in attack in Solna after more than two years out of the reckoning, may have a further opportunity to press his claims.

The same goes for Real Madrid midfielder Ferland Mendy if Lucas Digne is given a rest, and Lucas Hernandez who has been used sparingly at Bayern Munich.

But the name that is garnering much of the attention is that of Rennes teenager Eduardo Camavinga.

At 17 years and nine months, Camavinga missed out on a first cap on Saturday which would have made him France’s youngest player since World War II but there is every chance that will come in Paris this evening.

To make the starting line-up, Camavinga will need to dislodge either Adrien Rabiot, who played in Sweden for the first time since his refusal to be a reserve for the 2018 World Cup, or N’Golo Kante who put in a big performance in Scandinavia.

But Deschamps has all but promised Camavinga some game time, allowing the French to take a look at a young player who is likely to figure largely, alongside Mbappe, in the future.