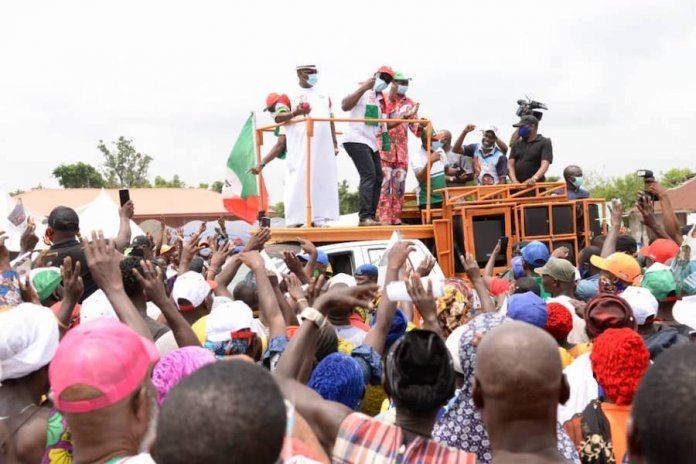 The Edo State governor’s campaigns in Okpella is more of a reality check, writes Kassim Afegbua

Too many lies make the politician’s pot of soup to swell. Too many lies swell their pockets especially when grabbed by bloated, pot-bellied men, struggling to fetch from the pot of soup. The Obaseki Campaign Team visited my community of Okpella on Sunday, 16th August, and made me the issue in their campaign. I felt so honoured that they consistently referenced the bad roads that are yet to be attended to. They said I served Oshiomhole for four years and I could not fix the roads. They wouldn’t complete the narrative that Oshiomhole started the roads, completed one part, and all we desire is a completion of the other part. Okpella people are becoming wiser. In Ward six, rather than host Governor Obaseki in Ogute with fairly smooth road, they hosted him at Imiekuri which represents the sordid reality of Okpella bad roads. With his 42 vehicles campaign train, they struggled to climb the mountainous road covered with red dust and smoky atmosphere. Getting there, he said, “within 24 months, if I don’t fix this 12.7km, don’t call me a governor again”. Of course he won’t be governor again after September 19 election.

His journey to Okpella was good. He has added to his list of failed promises. He had promised on four occasions to fix our roads, the declaration on Sunday, 16th August, was the fifth promise. He had failed in those four occasions. If it was not for campaigns, he probably would not have known that there is a community called Imiekuri-Okpella. Re-election fever has its own punishment for Governor Obaseki, who is now forced to traverse communities and villages he had hitherto forgotten. You could see him sweating profusely like a man who had just completed a marathon race. Some members of Obaseki campaign train sent me pictures of their imported crowd and left a cliche: “yeah, we are right now in Kassim Afegbua’s Ward five”. When the people that rode with them from Benin in their 42 vehicles convoy were emptied into Ikpomaza Grammar School’s sporting field, they were like oasis in the desert. They quickly called out to other wards to flesh up the scanty arena. That school has only four teachers in an era of Obaseki’s touted EdoBest education initiative. When they left Okpella with their noisy train, Okpella people were happy that they made him travelled through the bumpy ride. Some even teased that his vehicle almost skidded off the road on his way to Imiekuri-Okpella.

I am happy that I have made a loud statement about the plight of Okpella people in the hands of Governor Obaseki despite the huge internally generated revenue that accrues to the state on a monthly basis from the companies operating in Okpella. It is because of the abandonment and lack of performance of Governor Obaseki that made Chief Dan Orbih to score Obaseki F9 in all the critical sectors of the Edo economy. It is the reason why Orbih lambasted the governor for failed promises especially not being able to meet up the 200,000 jobs he earlier promised. Dan Orbih was unsparing of Governor Obaseki’s failed leadership and poor performance. But once the pot of soup of Nigerian politicians gets swollen, through pocket investment, they can choose to answer another name, reason why the PDP gifted Obaseki its ticket. Rather than tell Okpella people what he has done, he ended up making promise of 24 months before he could attend to our decrepit roads. The IGR that the government is enjoying today is a function of the intervention that Oshiomhole made to ensure that the companies took off.

Too many lies wear a surreal garb. I also read Senator Uzamere saying Governor Obaseki did not collect salaries in his eight years with Oshiomhole. What he got from the recurrent budget of the economic team was more than what the commissioners collected put together in a year and it is often drawn to the last kobo. What was paid as commission for the Benin City Storm Water Master plan loan to Afri-Invest was mind-blowing and more than all the salaries of all. With such perks, does he have to still collect additional salary? He also collected sitting allowance in the Tax Assessment Review Committee (TARC) at every of such meetings. Most of the travelling expenses of Obaseki especially out of the country were paid for from the governor’s office, in the name of estacode. How many commissioners had such benefit travelling outside the country? In 2016 budget, the commissioner for budget and planning, Lawrence Aghedo, almost engaged in a fisticuff with Obaseki over reduction of the budget of the economic team to N10m. Dr Aghedo, an economist, and such a cerebral mind, is still very much alive to contradict this narrative.

Talking about the Edo State Assembly that has produced a new Speaker in Hon Victor Edoror, I saw a petition written by one old man, Osaro Onaiwu, against our own cerebral, brilliant, rugged and fecund legal mind, Dr. West Idahosa, who served in the lower house for 12 unbroken years. Osaro, an old boy of Ikpomaza Grammar School, Okpella, suddenly remembered the school when he tried to raise dust over the location of my country home. Instead of investing his precious time on ways to improve his alma mater, he was busy shouting over nothing.

It was not an accident of history for the highly respected Otaru of Auchi to have openly endorsed the APC candidate, Pastor Osagie Ize-Iyamu by according him a title that conveys that “this is our own”. When next the government apologists tell us bogus lies, we know how to respond to them.

Afegbua was a commissioner for Information in Edo State