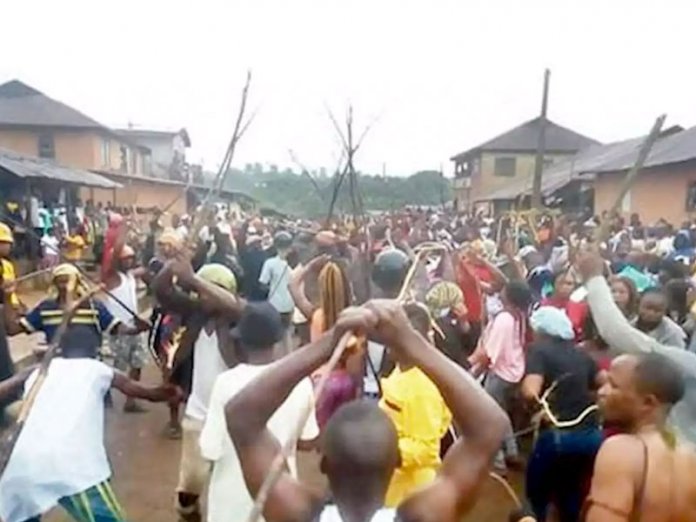 Two persons have been reportedly shot dead in Ire Ekiti, Oye Local Government Area of Ekiti State in crisis that enveloped the stoppage of Ogun Onire festival by the state government due to COVID-19.

A vehicle belonging to the town’s monarch, Oba Victor Bobade, was said to have also been set ablaze last Sunday by some irate youths, who were desirous to have the festival celebrated.

The state Governor, Dr. Kayode Fayemi, had in an attempt to stop the spread of coronavirus in the state given an order to stop celebration of traditional festivals across the state.

In an attempt to enforce the COVID-19 precautionary directive by the state government, the Onire of Ire Ekiti , Oba Bobade, was said to have told the Ogun adherents to shelve this year’s celebration, which allegedly pitted him against the worshippers.

The crisis, which had polarised the town into two factions, started last Sunday and snowballed into a full scale war yesterday, causing various attacks between the rival factions, which prompted the state Police Commissioner, Mr. Tunde Mobayo, to swiftly drafted policemen to the town.

It was gathered that the victims were allegedly hit by stray bullets fired while making attempts to quell the raging crisis that paralysed business activities for that day.

A source said the town is currently in serious crisis as relatives of the victims have continued to protest the killing of their loved ones.

“We have been having serious battle in the town since our monarch urged the Ogun Onire worshippers to stop this year’s festival. And the crisis between the factions loyal to the Oba and the worshippers led to the death of the victims,” the source said.

When contacted, the state Police Public Relations Officer, Mr. Sunday Abutu, confirmed that two persons were killed during the bloody crisis contrary to three being reported.

According to Abutu, “Yes, there has been crisis there since last Sunday. We have been trying to quell it. Some youths came to the palace and attack it, destroying and burning some vehicles that belonged to the king. We got a distress call and had to mobilise policemen there, and we were able to rescue the chiefs from the palace. We are still monitoring the situation.

“Probably it was protest and disagreement from various factions that led to the death of those persons. But investigations are on. Those who were involved in the act will be arrested and brought to book.”