A fresh crisis is brewing in the All Progressives Congress (APC) as one of its chieftains, Mr. Kalu Agu, has instituted a court action challenging the dissolution of the Adams Oshiomhole-led National Working Committee (NWC).

Agu, a youth leader of the crisis-ridden APC in Abia State, is challenging the powers of the National Executive Council (NEC) to remove the national leaders barely two years out of the constitutionally guaranteed four-year term of office.

In the fresh suit with number: FHC/ABJ/ CS/736/2020, the plaintiff is praying for an order of the Federal High Court setting aside the dissolution of the NWC by APC’s NEC meeting held at the Presidential Villa last month.

He is also praying the court for an order restraining the National Caretaker Committee members led by Governor Mai Mala Buni from parading themselves as national officers of the APC and from usurping the functions of the party’s NWC.

The plaintiff also prayed the court for an order restraining the National Caretaker Committee from putting into effect the resolution of the APC’s NEC meeting passed on June 25, 2020 and for another order against the Independent National Electoral Commission (INEC) from recognizing, dealing with or relating with the caretaker committee in whatever guise to usurp the functions of the NWC.

Similarly, the plaintiff also prayed for an order of mandatory injunction compelling INEC to continue to recognise the Oshiomhole-led members of the NWC as the authentic national officers of the party.

In the suit filed on his behalf by Ukpai Ukairo, dated July 8, the APC chieftain is also asking the court to strike down Article 17 of the APC’s constitution which provided for appointment of officers into the organs of the party for being inconsistent with section 223 of the 1999 Constitution and section 85 of the Electoral Act of 2010.

In a 44-paragraph affidavit in support of the originating summons, the plaintiff claimed to be one of the foundation members of the Congress for Progressive Change (CPC) under which he contested for the House of Representatives in Arochukwu/Ohafia federal constituency of Abia State in 2011 and that after the 2011 general election, the party along with others merged in 2013 to form the present APC.

The plaintiff further averred that he is an accredited APC member and that he was elected as the Abia State Youth Leader in April 2014 during the state’s congress held at Umuahia, adding that the national officers of the APC were also elected in 2014 in accordance with the party’s constitution.

Insisting that the 1999 Constitution guaranteed a four-year tenure for party officials, Agu averred that in breach of the same constitution on June 25, 2020, APC’s NEC meeting at the Presidential Villa, Abuja passed an illegal and unlawful resolution dissolving the NWC and also setting up an illegal caretaker committee of the NWC.

The plaintiff’s further grouse was that members of APC’s NWC had barely spent two years from their four years in office before they were purportedly dissolved by the NEC.

He is therefore praying the court to declare the dissolution of the NWC as unconstitutional, illegal, null and void and another declaration that the recognition accorded the caretaker committee is unconstitutional and illegal.

He further prayed the court to declare that the setting up of the caretaker committee for APC by the NEC on June 25 is unconstitutional, illegal, null and void and of no effect.

Meanwhile, no date has been fixed for the hearing of the suit.

editor - September 20, 2020 6:26 am
9
ENGAGEMENT BY CHIDI AMUTA Nigeria is currently like a small hamlet invaded by a thousand witches, each bearing a sack full of assorted plagues and... 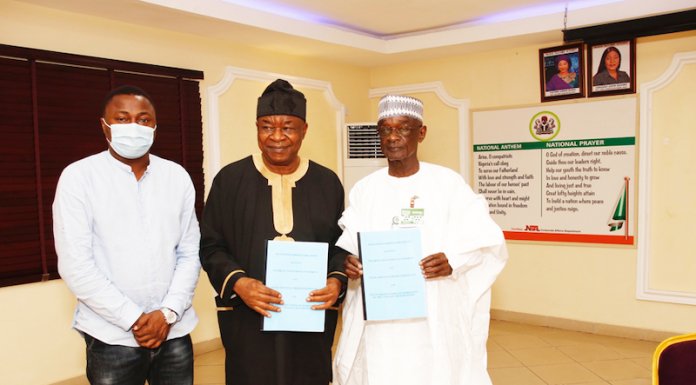 Osinbajo: FG will Get Justice for Nigerian Traders in Ghana