Minister of Labour and Employment, Senator Chris Ngige, has dismissed claims by the Nigeria Employers’ Consultative Association (NECA) that the suspension of the management of Nigeria Social Insurance Trust Fund (NSITF) violated the disciplinary procedure approved by President Muhammadu Buhari. Nigige’s position was corroborated by the account of President of Nigeria Labour Congress (NLC), Comrade Ayuba Wabba, who stated that Buhari gave the directive for the suspension of the Managing Director of NSITF, Mr. Adebayo Somefun, and other top management staff of the fund.

NECA had raised objections over the suspension of the NSITF management team and said the president did not approve it. In a letter to the labour minister, signed by NECA’s Director-General, Timothy Olawale, the association referred to a presidential procedure released by the Secretary to the Government of the Federation, which was meant to stem the arbitrary removal of chief executives of government agencies and ensure stability in the system.

The NSITF management also issued a statement accusing Ngige of acting without the president’s authorisation.
“We wish to state that President Muhammadu Buhari has not suspended the management of NSITF and did not make such announcement. The person mentioned in the media report is not a staff of the president,” NSITF had stated.

But the Federal Ministry of Labour and Employment, in a statement signed the Deputy Director, Press and Publicity, Charles Akpan, rejected Olawale’s claim. The ministry said the removal of the NSITF management followed due process as a parastatal fully owned by the federal government. Akpan insisted that the Minister of Labour and Employment acted in line with the constitution, public service rules, and NSITF Act.

According to the spokesman of the ministry, “NECA does not have the full facts, nor do they know that the Secretary to the Government of the Federal (SGF) conveyed the presidential approval to the Hon. Minister of Labour and Employment for full implementation.”
The NLC president supported the ministry’s stand Friday night while stating the organised labour’s position on the suspension of the NSITF management team. Wabba told THISDAY, “Mr President approved all the measures taken by the minister of labour, which was communicated to him for action by the Secretary to the Government of the Federation (SGF).”

The ministry’s spokesman said some of the infractions uncovered at NSITF included the alleged wastage of N3.4 billion on a non-existent staff training scheme split into about 196 different consultancy contracts to evade the Ministerial Tenders Board and Federal Executive Council approval. He said this involved a non-existent and unexecuted N2.3 billion contract that was documented and paid for, while N1.1 billion was awaiting payment without any job done, all totalling N3.4 billion.

Akpan explained that the NSITF Act empowered the minister to recommend fit and proper persons to Mr. President for appointment to the posts of Chairman, Managing Director, and three Executive Directors to manage the affairs of the agency.

He said the suspension of the management became imperative after preliminary investigation on allegations of corruption against the NSITF top officials established prima facie infractions on the extant financial regulations and Procurement Act and other acts of gross misconduct.

Akpan also alleged the discovery of breaches in relation to projects for the construction of 14 zonal/regional offices in 14 states “running into billions of naira – a policy issue being done without Board or ministerial knowledge, not to talk of approval. This was done in 2019 by the MD and his three-man Executive. Some of the projects are duplications and, hence, waste of funds, yet you are in the Board, supposedly, supervising!”

He said, “If a minister observes there are financial breaches earlier reported and gross misconduct he does not need to go back to a Board that has been complaining to the same minister.

“We hope that NECA does not expect the minister to fold his hands like his predecessor, who watched helplessly when the last board chair in cahoots with the two NECA representatives, MD, and officials, looted N48 billion from the Fund and are being tried as of date by the EFCC

“NECA leadership should have been more restrained and responsive to the mantra of this administration, like their NLC counterparts, as the NSITF is a Federal Government Parastatal operating within the realm of the Constitution, Public Service rules, and the NSITF Act, which empowers the minister to recommend fit and proper persons to Mr President for appointment for the post of Chairman, Managing Director and the three Executive Directors for the day-to-day management of the agency…

“The president on recommendation of the minister also has powers to discipline, suspend or even remove totally, depending on the circumstances of each situation.”

Akpan stated that the labour ministry did not intend to go into a “media altercation with a social partner, NECA,” but insisted the association’s director-general should “emulate the NLC who liaised with the ministry to be adequately briefed and were satisfied after the briefing, more so when they had also received brief from their person on the Board.”

He regretted that Olawale, as a representative of NECA on the Board, sat and watched when the suspended MD of NSITF and some members of his executive were squandering the funds in question. 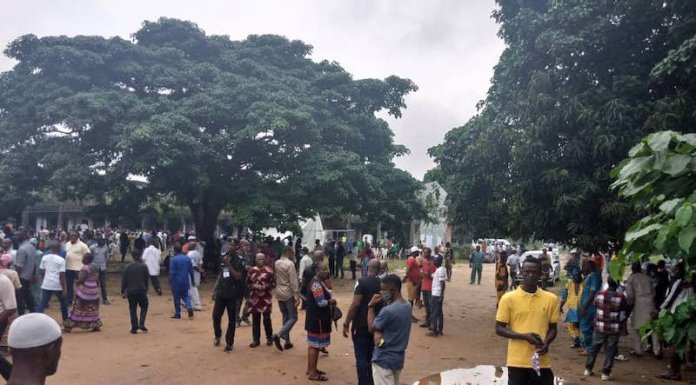 Obaseki Begins Thank You Tour, Says ‘I Will be Magnanimous in Victory’