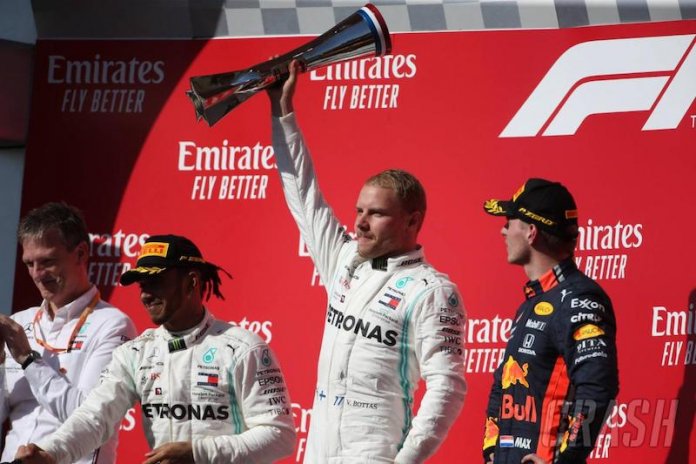 Formula One will be forced to axe the traditional podium ceremonies when the disrupted 2020 season begins next month.

The sport will recommence in Austria on July 5 with strict safety procedures in place due to the coronavirus pandemic – and the infamous champagne-spraying antics between the top three drivers will have to be stopped.

F1 Sporting Director Ross Brawn has insisted that the celebrations, which will instead be stripped down, may be held on the grid as part of ‘the new norm’ for grand prix racing.

The first eight races of the campaign will take place without spectators, and the paddocks for each team will be closely controlled and monitored to prevent the spread of infection.

It was also revealed that team staff will be regularly tested for Covid-19 and will have to ensure they adhere to social distancing guidelines.

But despite the rigorous precautions in place to ensure the sport can be held during the health crisis, the trophy presentations on the rostrum will not take place.

Brawn told the official F1 website: ‘The podium procedure can’t happen [as it does now], but we’re looking at doing something on the grid after the race.

‘One option would be to line the cars up on the track and the drivers will stand in front of cars.

‘We can’t present the trophies, as you can’t have someone in close proximity presenting a trophy, but we have worked it out, we have plans and procedures, we’re looking at how we can present it on TV.’

The state of the sport for the foreseeable future will be a stark contrast to how events were run before the pandemic, but Brawn is certain that F1 will continue to enthral viewers in a similar fashion.

He insisted that the events will provide an ‘engaging and exciting product’, and added: ‘It will just be different. This is the new norm.

‘How long will this carry on? We don’t know, but this will be the new norm for the rest of the year for sure.’

F1 organisers still remain hopeful that they can stage 15-18 races this season, despite the Azerbaijan, Singapore and Japan GPs all being cancelled on Friday.

Reports suggest that the Sao Paulo circuit is also under threat because of the state of the pandemic in Brazil.