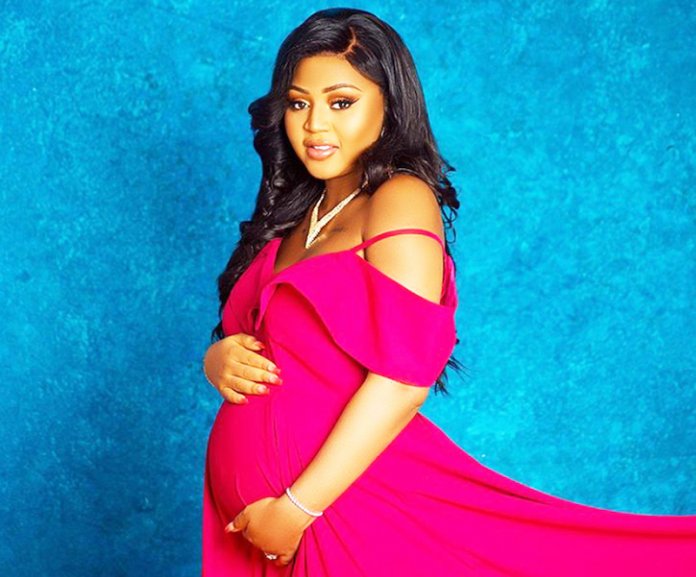 Star actress, Regina Daniels, has shared new photos of herself as she gushed about her pregnancy. Posting the endearing maternity photos recently on Instagram, the soon to be mum wrote: “Motherhood is beautiful”. Regina Daniels is expecting a child with billionaire businessman, Ned Nwoko, who she married last year. Although there have been indications for a while that the actress is pregnant, it has only just been confirmed.

Regina’s maternity pictures were also posted by her happy husband on his Instagram page @princenednwoko. The lawyer and politician surprised his fans and well-wishers when he uploaded a picture of his young wife, Regina Daniels, lovingly cradling her baby bump on his Instagram page. The post which had attracted thousands of comments read: “It is now official. I am excited to announce that my baby @regina.daniels is having a baby.”

It was also revealed in another report quoting Adeniyi Ifetayo, who is the Media and Publicity officer to the billionaire explorer that there is a documentary coming out soon to be titled “Regina Daniels Nwoko: Journey to Motherhood”. Regina first gave fans glimpse of her bump a fortnight ago when she posted pictures of her pregnancy. She took to social media to share videos of herself, looking all glam in a black dress, in what was apparently the behind-the-scenes of a photoshoot.

Captioning the videos, Regina wrote, “I have never been this happy before. This feeling of becoming a mum is the most amazing journey of my life …I see myself speaking to my tummy all day, staring at the mirror and still can’t believe it. This child is about to change my entire life Oh! How much I can’t wait”. Congratulatory messages from fans and colleagues have continued to pour in for the actress and social media celebrity, who constantly show off her husband’s wealth and flaunts her extravagant lifestyle to her 7.6 million followers.

This is the actress’ first child with her husband who already has children from his other wives. The couples have no doubt enjoyed social media attention because of the age gap between them. Although her age has been a topic of debate online, fans and critics alike have come to terms with the reality of Daniels’ marriage to her 60-year-old hubby.

In 2019, the politician had made headlines on several occasions due to his relationship and marriage to the 20-year-old Nollywood actress. In the wake of the backlash that had trailed the union on the basis of the duo’s age difference, Daniels had claimed she couldn’t have married within her age group because she’s stubborn.

What Next for Emmanuel Dennis?