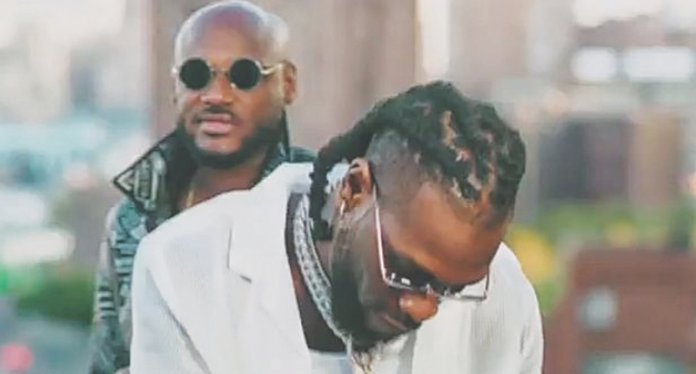 It’s already in the news that Innocent Idibia aka 2Baba has dropped his much anticipated album titled Warriors. His seventh studio album, shortly before release, was preceded by the visuals for ‘We Must Grove’, a track off the 13 track album. Of the new songs from the LP, this is 2Baba’s first video for the song which featured Burna Boy. The less than four-minute video, which was produced by Jay Sleek and directed by Patrick Ellis, sees the superstar singer addressing how people can weather the storms of life and still come out strong.

No doubt, his social and political lyrics have transformative effects on the industry as a whole; it is no surprise ‘We Must Groove’ is the next single on the record, following its title track, Warriors. Hence it is seen as a priority track when the visuals first got exposed to an exclusive A-list guests that spans the music, movie and the media industry during the album listening tagged ‘silent party themed’. In the song, 2Baba is feeling with the pressure, feeling with different problems of life. But the scenes look foreign.

The video kick starts and characterises the lyrics on a relatively ecstatic note but gradually assumed a temperate tone with a scene of an evicted tenant, who is apparently frustrated. It also captured that of a lady who appeared to be having a relationship setback. Both characters are seen drinking themselves to stupor. The exciting atmosphere, which characterised the early part of the visuals, however, returned later, with 2Baba suggesting that nothing is worth worrying about in life. He croons:

Even if I get fever

Or my landlord on the case

As long as happiness

I no go give vex

I dont need to stop, to fly high high

I got the natural high

I don’t need to think too much

But – no problem instead of raising solution

Before the self-branded African Giant interplays the lyrics with slow raps midway into the song. 2Baba says of the body work is to celebrate people that have been doing great things, young and old. And Burna Boy falls into the category having had impressive career run that peaked recent times. Seems the first time both artistes are doing a song together.

In his latest offering, 2Baba gives fans a little bit of everything – Afrobeats, Afropop, R&B and even reggae. Although one feels it’s an upbeat song, critics and music journalists have had their takes of the album and one related to the track in review goes thus.

In “We Must Groove” featuring Burna Boy, 2Baba switches to a reggae melody with a heavy Jamaican-style lyricism. While a fairly mid-tempo, the overall feel of the song is laid back and will have you wanting to wind that waist. Additionally, the brass instrumentals of the track definitely add the right amount of bounce.

The afrobeats/afrofusion tune is highlighted as top five songs with very high replay value to look out for in the album. The album is his fifth work released under his record label, Hypertek Digital, which he established after leaving Kennis Music in 2008 and also marks part of his 20 Years A King celebration, which commemorates 2Baba’s two decades in the Nigerian music industry. The album is a follow-up to the artistes last project The Ascension which was released back in 2014.