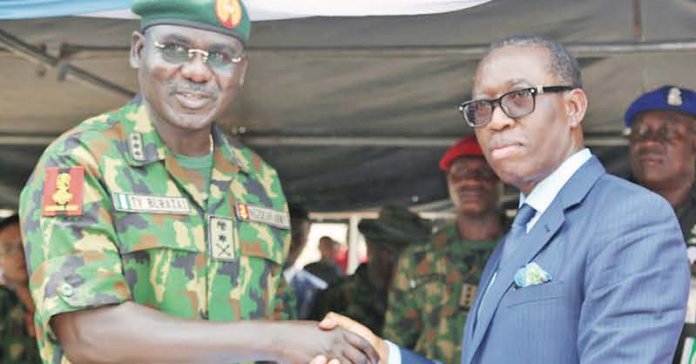 Delta State Governor, Dr. Ifeanyi Okowa, yesterday inaugurated the 63 Brigade of the Nigerian Army Complex in Asaba, the state capital, expressing worry about the lingering menace of herdsmen as well as the spate of violent crimes especially kidnapping.

While appreciating the combined efforts of the army, the Navy, police and the other security agencies that have created an atmosphere of peace in the state, the governor said the menacing activities of herdsmen who often clash with farmers has continued to be a cause of concern to his administration.

Okowa said: “There is no doubt that we still have security challenges in Delta State. We have issues regarding the farmers/herders clashes. That has been worrisome in the last few weeks but I know that we have been trying to put heads together on how best to handle it, working with the civil authorities.

The governor expressed the hope that the cordial relationship between the people and the various security agencies would be sustained in bringing the security situation in the state under manageable control.

Earlier in his address, the Chief of Army Staff (COAS), Lt-Gen. Tukur Yusuf Buratai, said the establishment of the new brigade in Delta State was a deliberate step towards strengthening the security architecture especially in the strategic Niger Delta region which the state is part of.

Buratai, however, parried questions by newsmen on the call by the National Assembly for the sack of the Nigerian military service chiefs because of the high levels of insecurity in the country, saying he was in Asaba for the purpose of inauguration of the 63 Brigade of the Nigerian Army.

“The establishment of this 63 Brigade of the Nigeria Army is not by an accident. It is a product of thorough analysis that led to sound decisions and deductions in view of the strategic importance of this state. You know, Delta State is quite strategic in the South-south zone.

“Secondly, Delta State has direct access to the sea. The Navy plays a very important role in that regard, in the territorial defence of our waters; but the land forces also have that role especially the riverine environment where we have our amphibious capabilities, which we utilise to defend our territorial integrity and also to ward off any external aggression.

“The 63 Brigade is the outcome of the Nigerian Army Order of Battle 2016 that created it,” he said.

While recalling the success of the ‘Operation Crocodile Smile 04’ organised in the area between November 2019 and January this year, Buratai assured of the army’s readiness to deal with all criminal threats to civil authorities in Delta State and other states particularly in the the Niger Delta region.

Buratai also assured that plans were ongoing towards the operationalisation of the 181 Amphibious Battalion located at Arbor in Ika South Local Government Area of Delta State, saying the inauguration and operationalisation of 63 Brigade would complement the activities of other miliary formations in the state and region to deal with threats to peace and security in the area.