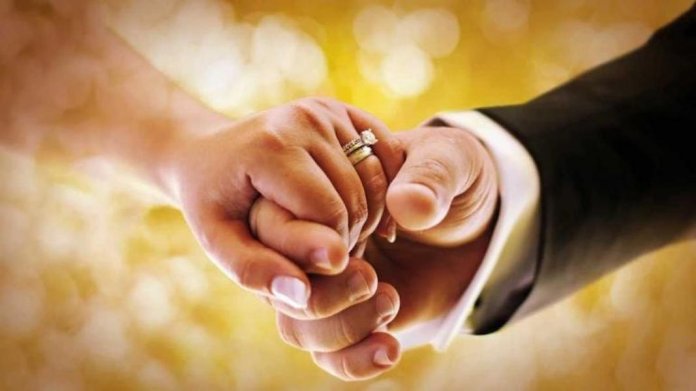 A man and a woman will get married because it is a societal norm; this is in addition to nature that dictated procreation can only occur veer a sexual relationship between the opposite sex. The need to fulfill or satisfy emotional needs would also necessitate the coming together of the two genders. Two people of the opposite sex would however not come together without some form of a display of emotions for each other.

The degree of this emotion will either increase or decrease depending on what these people discover about themselves. Firstly, if the man is rich and live in affluence, it is an invitation for the lady to thank her stars for running into his hands. She would seize the opportunity to avoid whoever hitherto dated her by putting up an attitude until she finally escapes from the hands of an agent of penury. It is after this old friend must have been dismissed from her life that she would come one on one with the reality that she is not the only one the rich man dates. Consequent upon which she would have to decide whether to stay on and end up in what could swing her ultimately into the hands of polygamy or go back to redeem the relationship with the old boyfriend and struggle through life with living a life where she manages to get by.

If she opts to go for the rich man, she would have to cope with a life of quarrels and altercations to secure the attention of a man who would decide where he wants to sleep and which wife gets the best of his attention and resources. Somewhere along the line, she would be treated like an old shoe if the rich man decides to marry another wife. In consideration of this background, one would come to terms with an old adage that says “a woman would identify with a tangible prosperity rather than a miracle that has not manifested into reality”. This author would however not generalize that all women get married on a note of money as a primary determinant .There are those who get married in consideration of a perceived positive future. They are into the business of ensuring things work out by deploying physical and material resources to assist her spouse maintain and sustain the family. That positive disposition notwithstanding, she would put the blame on her husband if there are shortcomings in revenue to support her family.

Abuses, quarrels and threats would underscore the way she would react. The last time I checked the scriptures, women by way of an obligation, were not asked to work. A man was however mandated to work in the bid to secure his daily bread. From civilization standpoint, a woman works, but the proceeds of her sweat are recognized from the secondary point of view. What her husband brings to the table is primary, critical and germane for the survival of the family.

She disburses her financial resources to support the family only in her capacity as a helpmate to her husband. There is another injunction that if a woman loses her husband, people around her should assist her and also support her children. Consequent upon these scenarios; couples on the altar of sound wisdom are advised to put their resources in any of the following: property, stocks and securities, pension, group life and health insurance.

This writer is however, not relegating love at all. Genuine Love is the engine room that binds the couple together in good and bad times. Love is the wheel on which the relationship revolves because at some point, nobody wants to look at the face of the woman, who though obviously old, rebrands and repackages with make up but her husband knows he married her from way back. Similarly, her spouse, though carries himself with the agility of a school boy, is now a fairly used husband in the context of marital affair.

Genuine love without any prejudice, binds them together, until death would ultimately separate them physically. Yes, love is principal for the continuity of every relationship towards an undefined moment in the future. However, in Africa south of the Sahara, money plays roles nobody can dismiss with a wave of the hand.

WIDOWED OR DIVORCED? THERE IS HOPE FOR YOU

Whatever happened or did not happen is not the issue at stake presently. Who disappointed your expectation or who was there at the time you needed them is currently secondary and would not help. The principal person who should make things happen is you who had an experience with either the loss of a loved one who was your soul mate or with the loss of a marriage you worked hard to keep but which could not work. This piece is set to situate available options before you in the right perspective.

The first thing to come to terms with is the need to move on with your life. Secondly, you should understand there are some variables beyond the control or influence of humans. Thirdly, if you were given a blank cheque, what would you like to do with it? Consequent upon which you should ask yourself a question “What do I want presently?”

If you are widowed, the following are the available options before you: Get married again or avoid issues relating to marriage. If you are divorced, the above options are relevant to you as well. Getting married is a way of scouting for your best friend and moving on with your life. If this is what you want; you must be deliberate about it and be positive it would work. This implies the choice of people you would share your personal views with.

Avoid pessimists who may want to take you down memory lane of the imperfections and a short coming of your past marital life. This suggests a change in your environment and making new friends.

In recognition of a decade which just started, you may decide to occupy yourself by opening a new shop, start a new project or embark on another academic degree. This is a new decade where you are expected to rediscover and redevelop yourself.
In the process of embarking on new endeavours, you are likely to meet new group of people, friends and associates. Open your heart to new offer for friendship especially towards those who are economically productive. Your previous relationship produced children who are now parents in their respective homes. In other words, you are now a grandparent. Prioritize your week and do not spend all of the times babysitting your grandchild. Take a chance on this decade and explore new opportunities.

You know the number of times you had sex over the years before you had all your children. Now that you do not have an active sex partner, your body must be craving for sex, however, here is a word of caution, avoid multiple sex partners and those you considered are not willing to go a longer stretch with you by knowing who you are, where you are coming from and where you are going. If you, however, decide to avoid getting married, it is entirely your own choice. You are advised to register with a sports centre and look physically better.

You can also contribute in what could alleviate the sufferings of the less privileged. An Octogenarian man in 2019 got married to a Septuagenarian lady. The man, a former widower and the lady a divorcee, both grandparents from their previous relationships. You may want to agree with me that the sexual fireworks that hitherto eluded them now occur with the agility of veterans in action. Depending on what you want and a positive attitudinal disposition, widowed or divorced, there is hope for you.