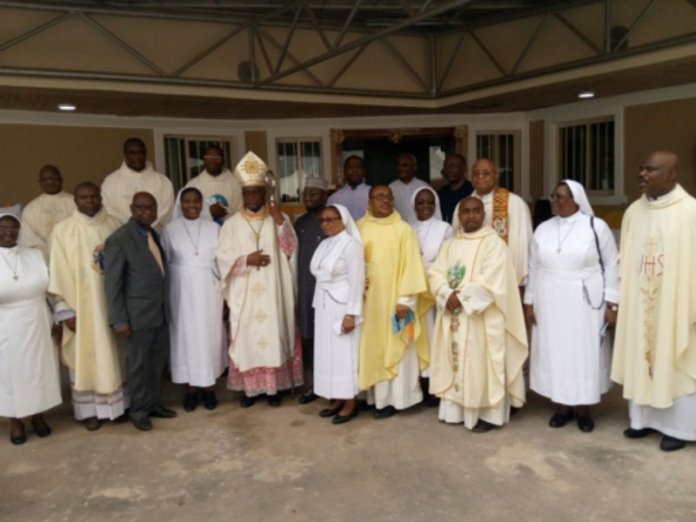 The Catholic Archbishop of Lagos, Dr. Alfred Martins, alongside other stakeholders, has called on government at all levels to increase investment in health facilities in the country, in order to encourage Nigerians to seek medical attention within.

They made this call recently at the unveiling of a new 50-bed capacity building, Anceilla Catholic Hospital, Ifako, Lagos.

In his address, the Archbishop advised the President Muhammadu Buhari to lead by example by receiving health care within the country, so as to facilitate improvement in the sector and encourage other Nigerians to follow suit.

“The church, through the Handmaids of the Holy Child Religious Institute has made this hospital facility available. It is in continuation of carrying out that which Jesus demanded of the church, and we thank God for it.

“The other day, we heard the president advising that people should stay within the country to receive the healthcare that is needed, this hospital would be one of those facilities that are needed to provide them that healthcare and others just like this.

“We also expect that the government would do similar things to the government health institutions because many of them obviously don’t have the type of facilities that would attract people to come and use them in the same way as the president desires.

“And indeed, it would be wonderful if there came a time that neither the president nor any of the government officials would need to go abroad for any medical treatment.”

Describing the efforts of the church in the development of the health sector, especially as it concerns the locality it is situated, the acting Chairman, Ifako-Ijaye Local Government, Prince Usman Hamzat, said it was a tip of the iceberg from the church. He also called for more private and government partnerships in the sector.

“This is what I would call a tip of the iceberg from the Catholic mission. This is what they have been doing for a very long time. And it is a sign that the religious body wants the best for the community. And it is also an advice and a wake-up call to other bodies that it is important not just to leave the government alone to do everything.

“The fact is the government has been trying. Lagos State has a lot of health centers. We have the renal and the heart centers, cardiac centers etc. Which I think it has gone a long way in improving the health sector in Lagos State.

“In the local government, we are also starting a health scheme aimed at subsidising the treatment of some minor ailments, such as malaria, typhoid etc. They are only meant to register for the scheme with a little token and they would enjoy the offers for a whole year.”

Speaking on some of the services the newly built hospital would be offering, the Medical Director, Ancilla Catholic Hospital, Sister Anastasia Njoku revealed that it would be providing both surgical and general health services at cheap rates.

“When we started this place in 1997, it was mainly to give a standard and affordable healthcare to the people of the area who are mostly low-income earners. But as time went on, we realised that the demand for our services had increased, and the place we were using at Iju became too small, and also we had the challenge of accessibility, hence, we decided to expand to this area.

“The facility currently has 50 beds but if overstretched it can take 60. But for the whole of Ancilla Hospital, we have up to 100 beds, because the eye center has 30 beds, Iju has 20 beds and this new building has 50 beds. And our cost is very affordable,” she added.

She said sometimes people confuse the hospital to be expensive because of the massive structure and facilities, but that it was not so.

She said: “We are open to everybody, not just Catholics. And even our staffing is opened to everybody, as much as you respect family values.”