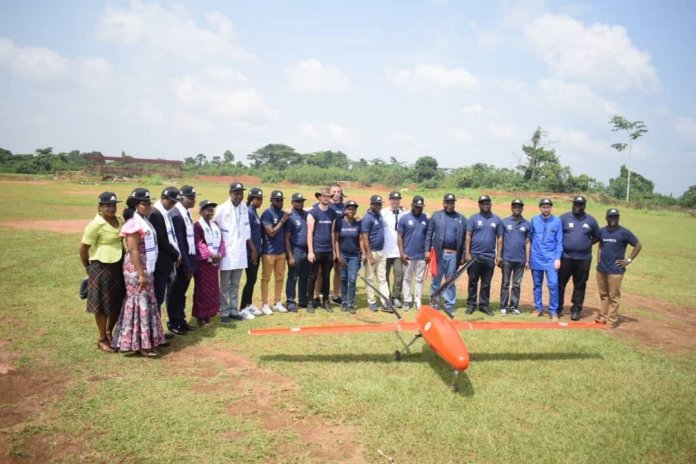 With the recent purchase of two unmanned aerial vehicles by the Lagos State government for digital mapping and effective planning, stakeholders believe the state is tilting towards becoming a smart city, Martins Ifijehwrites

While Lagos, a home to over 22 million people, is a destination for many Nigerians who crave for the pursuit of happiness because of its cosmopolitan nature and business friendly environment, the increase in population has begun to have a toll on planning, infrastructure, environment and the people.

For instance, housing, lands, transportation, healthcare challenges, air pollution, as well as flooding have continued to threaten the mega-city status the state is known for, hence prompting the state government to push for a change in status from the mega-city it is known for into a smart-city.

To achieve this, the Governor, Babajide Sanwo-Olu said his administration has put a number of moves in place, including the deployment of technologies, and the use of highly experienced professionals to ensure, Lagos, in no distance time, becomes a smart city, just like New York and London.

As one of its plans to ensure public services are delivered despite the overwhelming population the state is faced with, he recently launched two aerial unmanned aerial vehicles (UAV), commonly called drones which would help in digital mapping and accurate planning of the proposed smart city

A drone typically refers to a pilotless aircraft that operates through a combination of technologies, including computer vision, artificial intelligence, object avoidance tech, and others.

Sharing his thoughts on the feet in an interview with the media recently, the Commissioner for Science and Technology, Lagos State, Akeem Popoola Fahm, said the purchase of the two Tiguar S-410 UAVs marks the demonstration of seriousness by the state towards attaining a smart city status, as this technology has taken the state an inch into achieving the dream.

Fahm said the UAVs will give Lagos more convenient resource systems to deliver the digital mapping infrastructure that will serve as the backbone for the state’s planning activities, with at least, six UAV operators trained and certified in Poland to fly and maintain the drones.

UAVs, he believed, would offer the unique ability for the state government to capture data within a convenient time frame whenever it is in need of accurate facts to guide planning.

He said: “The UAVs will be most useful in ortho-photo mapping, environmental monitoring, infrastructural control, flood monitoring, search and rescue operations and many more disaster management activities. Once the digital mapping is available, it provides limitless benefits for the state in terms of delivering accurate data that helps purposeful planning, as there is virtually nothing involved in public affairs management that does not require this great planning tool.”

While previous administrations had made concerted efforts to improve the status of the state, it is believed the UAVs offers limitless capacities into achieving the dream city the present administration hopes to get.

The real benefits of EGIS project

Fahm, who is a seasoned ICT expert with a track record of distinction in the deployment of technological innovations to solve social problems, said some of the common issues in the state were around property acquisitions and complaints about ease of doing business in Lagos, adding that the digital mappings with the aid of the UAVs, and through the Enterprise GIS (eGIS) platform launched by the state in 2015, it will now be able to fully provide a digital mapping platform of the entire state.

Armed with digital mapping data, Fahm said the state would be able to develop programmes such as land management, flood, erosion controls and rainfall patterns in more efficient ways.

“But the scope of the ambitious project has since been expanded to cover migration of the present spatial data infrastructure (SDI) to the Cloud platform, implementation of Google geo-technology platform, deployment of the continuously operating reference stations (CORs) across the divisions of the state, acquisition of unmanned aerial vehicles for data capture and mapping, building of bespoke applications to cover health, pharmaceuticals, agricultural sector and real-time kinematics for structural and civil engineers, surveyors in private practice, and navigators; deployment of e-survey solutions, implementation of the integrated land administration and automation system using Thomson Reuters Aumentum Solution.”

Because all the data generated is viewable from any part of the world either using desktop, tablet or smart devices, he said the overall benefit of the project was that it will improve the ease of doing business and boost the confidence of investors locally and internationally.

“It will bring about improved planning for social services to the populace in the area of education, health, infrastructural development and security; just as it will usher in increased public confidence and people will be more disposed to buying properties due to lower transaction costs. It will also enable the state government tackle all land conflicts easily as it will bring about the standardisation of business processes involved in land transactions and make way for an improved and bankable Certificate of Occupancy (C of O),” he added.

What Lagos will look like as a smart city?

By the time the dream becomes a reality, Fahm said that Lagos will begin to run a 24-hour economy where companies can operate in a secure environment, thereby creating more jobs and increasing the state’s gross domestic product.

Because ICT serves as its backbone, which provides the template upon which everything revolves, a smart city is one in which public facilities and other infrastructure that enable social services delivery to achieve the best possible operational efficiency – since conception, planning, and implementation of policies are anchored on verifiable data. In other words, it is not just a city that is ICT- driven; it is one that makes useful information and data readily available for everyone, thus improving both the quality of government services and citizens’ welfare.

According to Fahm, Lagos as a smart city will be much more than just technological networks because it will use new technologies for the benefit of its citizens and the city will become more efficient in the process, especially in the deliverables that make life more abundant for residents.

Believing that Lagos, which generates about 90 per cent of Nigeria’s trade flows and is rated the fifth largest economy in Africa, can do far better than it is currently doing in view of its humongous potentials, the Lagos State House of Assembly (LAHA) has also fully thrown its weight behind the smart city initiative – seeing it as a great possibility.

During the 2020 budget presentation, the Speaker, Lagos State House of Assembly, Hon Mudashiru Ajayi Obasa, challenged the executive arm of government to come up with bold and innovative ideas that can take Lagosians out of the woods and precipitate tremendous changes and improvement in the standards of living of residents.

While promising that LAHA is fully prepared to lend its support, Obasa suggested other means of mass transportation in the state, especially rail, at the presentation of the 2020 budget by Governor Babajide Sanwo-Olu recently.

Having a population of over 20 million dependent on-road transportation, which is the most common for movement of people and goods in Lagos, needs to be reviewed if social and economic prosperity is to be realised in a state that records the most visits from across the country averaging 5, 000 daily, with not less than 600 people staying put and taking residence in spite of the state’s disadvantaged position in landmass. He pointedly asked Governor Sanwo-Olu to change the narrative in the area of transportation, which is at the heart of any economic development, but a major headache in Lagos. Also, the lawmakers admonished the executive to take advantage of the state’s aquatic endowment by embracing water transportation, saying a functional and modern transportation system is one of the major indices of a smart city.