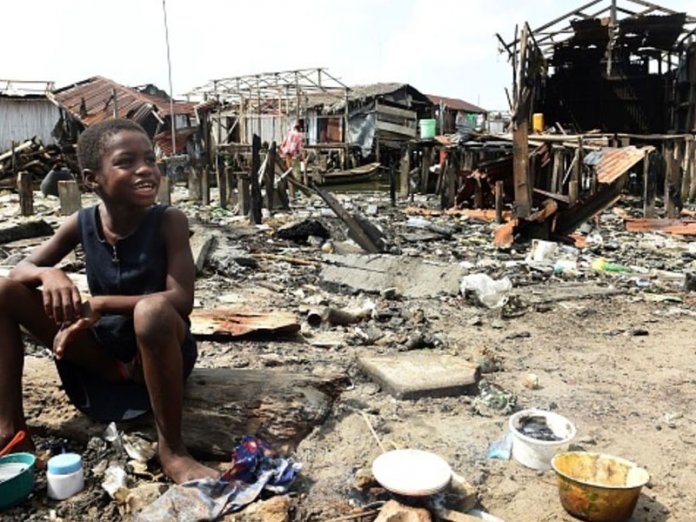 There is need for increased partnership between the public and private sectors to address the rising incidence of poverty in the country, writes Obinna Chima

Globally, the gap between the haves and the have nots have continued to swell.
On daily basis, thousands of migrant from Africa, mostly Nigerians, attempt to enter into Europe and other continents in search of greener pastures, in order to get out of what they perceive as the excruciating poverty in the continent.

In the course of this, a lot of them migrate through dangerous route through to Europe through Libya, with thousands of them get sucked into a world of violent crime and slavery.
In fact, majority of the migrants involved are young men and women who flee economic realities that include poverty, inequality, and lack of opportunity.

Far from being a driver of economic growth, extreme inequality is a barrier to prosperity for most people.
In Africa and some other countries around the world, prosperity is not trickling down to ordinary people, but has remained at the top, where exceptional wealth is growing ever more rapidly.

There is a growing consensus in the continent that inequality is a crucial challenge and failure to act is both economically and socially damaging.

Inequality hinders growth, corrupts politics, stifles opportunity and fuels instability while deepening discrimination, especially against women.
This is even worst in Nigeria, which was had been adjudged as the world poverty capital after the overtook India having the highest proportion of poor people.

Ending Poverty, Improving Healthcare
Therefore, in line with the United Nation’s agenda to end extreme poverty by year 2030 under the Sustainable Development Goals, Global Citizen, a global movement for citizen-led actions to eradicate poverty and improve human living conditions is working with the Nigerian private sector to harness resources to achieve the objective of ending poverty.

The Co-founder of Global Citizen, Mr. Michael Sheldrick, during a recent forum tagged: ‘Global Goal Live: Nigeria Policy Forum,’ in Lagos, noted that the movement has created millions of positive citizens’ actions across the world to hold leaders accountable in the fight against hunger and poverty.
The co-founder revealed that despite the enormous wealth in the world, poverty was increasing in certain regions of the world especially in Africa, where Nigeria as a country had been projected to host 25 per cent of the world extremely poor people in the next 15 years if urgent actions were not taken.

Active citizens in the private sector and the civil society according to Sheldrick, must partner with the government, which has greater responsibility, for the welfare of citizens.

Speaking on the launch of Global Citizen in South Africa in 2018, Sheldrick said the event galvanised 16 governments, eight international institutions and foundations, and 12 corporations to make financial and political commitments to work in collaborative manner to tackle poverty.
“We saw engaged citizens take over 5.65 million actions globally which resulted in 60 commitments and announcements worth $7.2billion set to affect the lives of 121 million people around the world. In South Africa, more than 400,000 people have already joined the movement and across Africa. We are happy to be in Nigeria and ready to work with private sector philanthropy and government to achieve the SDGs and end poverty,” said the co-founder who is also the Chief Policy Officer of Global Citizen.

The Vice Chairman of Global Citizen Nigeria, Mr. Aigboje Aig-Imoukhuede, who was a former Chief Executive of Access Bank, delivered the overview of the Global Citizen’s Nigeria Policy intervention on the healthcare delivery system.
Aig-Imoukhuede called the attention of the participants to the state of Primary Healthcare system in Nigeria with a verdict that out of the 30,000 Primary Healthcare Centres in the country, less that 3000 are functioning well.

At the policy forum, the former bank chief committed to personally build a world-class primary healthcare centre in each of the 774 local governments in Nigeria and called on other wealthy Nigerians to commit to different initiatives that will help the country to meet other objectives of the SDGs by 2030.

Furthermore, in Lagos, on September 26, 2020, the Global Citizen will stage a Global Goal Live Concert with world class musical artistes at the Tafawa Balewa Square, where over 40,000 Nigerians are expected to attend. Tickets to the concert according to Aig-Imoukhuede cannot be purchased and will not be free.

He said of the concert, “What it means is that to qualify for a ticket to the concert, Nigerians – old and young are expected to carry out some community and citizen-led actions towards eradicating poverty and achieving any of the Sustainable Development Goals.
“Six months to September next year, that will be March 2020, Global Citizen will announce the mechanics for participation at the Concert and we will start full blast publicity and awareness. It is all about raising over voices as citizens and calling on our governments to do more to end poverty,” he explained.

In his remarks at the forum which focused on healthcare delivery system in Nigeria as a core component of the UN SDGs, the Chairman Global Citizen Nigeria, Mr. Tunde Folawiyo, said the private sector and civil society could no longer stand aloof from addressing issues of poverty in Nigeria because failure to address extreme poverty in Nigeria will put everyone at risk.

“Nigeria is already dubbed the poverty capital of the world. And in the next 15 years, a World Bank recent report said Nigeria will host 25% of the extremely poor population of the world. That is a worrisome statistics we must begin to work to address as a people. We cannot just stand by and do nothing,” he added.

On her part, the Senior Special Assistant to the President on SDGs, Princess Adejoke Orelope-Adefulire, who attended the forum, used her panel discussion session to talk about the federal government’s efforts at eradicating poverty in the country, adding that a national framework in line with the Economic Recovery Growth Plan had been launched which is being mainstreamed into the sub-national governments for adoption.

“We are working with the state and local governments because that is where the people are. We are happy to collaborate and work with Global Citizen eradicate poverty in our country. I want to also commend Mr. Folawiyo and Aig-Imoukhuede for leading the private sector efforts. It is only when we the public and private sectors work together we can solve the problem of poverty of our people,” she said.
From the foregoing, while the efforts of the Global Citizen Nigeria is commendable, there is need for urgent human capital development in the country to address poverty in the country.

Governments at all levels must develop programmes to would lift a lot of the people out of poverty and this can be achieved by forging stronger partnership with the private sector.