Governor of Ekiti State, Dr. Kayode Fayemi, has said his administration won’t disappoint in the delivery of developmental and infrastructural facilities, in spite of the acute dearth of funds.

Fayemi added that his administration was incurably determined to spread the tentacles of development across all the 133 towns and other villages in fulfilment of the social contracts he signed with Ekiti residents.

The governor spoke yesterday at different towns when he flagged off the rehabilitation and reconstruction of Agbado-Omuo road, Ilupeju-Ire-Igbemo-Ijan road, Oye-Ikun-Otun road, and Aramoko-Erijiyan-Ikogosi road in the state.

Fayemi urged the people to create enabling environment for the contractors handling the projects to operate for prompt and timely delivery of the projects.

He said his administration would strive hard and mobilise funds to carry out landmark projects that would add values to the socio-economic and physical well- being of the populace.

“The contractors started some of these roads being re-awarded in 2013 during our first term, but could not proceed substantially before my exit. The last administration did little work before the roads were abandoned and that informed why we terminated the contracts and re-awarded them to the original contractors.

“If you check critically, all these roads are critical to the economic development of our people. The Ilupeju-Ire- Ijan road will resolve the challenge of moving the Ire Burnt Brick products from the town to other parts of the state and the country at large.

“We are determined and we shall make sure that every part of the state is accessible by good road network in line with the cardinal objective of infrastructural and capital development of our administration.

“Let me assure you that we won’t allow paucity of funds to deter us from achieving this. We have sourced for funds to solve many of our challenges.

Fayemi tasked Ekiti residents to pay all relevant taxes to be able to strengthen the revenue base of the state to facilitate delivery of more democracy dividends to the people.

Assuring that laxity won’t deter his administration in the execution of projects, the Commissioner for Works, Mr. Sola Adebayo, said the roads would bring a facelift to the industrial development of the state when completed.

The commissioner urged the contractors to deploy the best equipment and modern technical expertise for the execution of the projects.

He appealed to the people of Oye, Gbonyin, Ekiti East and Ekiti West local government areas of the state to support the government, saying no contract could be executed freely under the atmosphere of crisis.

Lauding the government for initiating the landmark projects, Onire of Ire Ekiti, Oba Victor Bobade, praised Fayemi for not politicising project execution in the state.

“If we are to consider politics, Ire Ekiti doesn’t worth this project, because of the way my people voted in the last governorship election. But because the governor knew that people are suffering, he looked beyond politics. We didn’t vote for him, but he counted us worthy. My people in Ire Ekiti next time there are elections, try and open your eyes and vote wisely,” he advised. 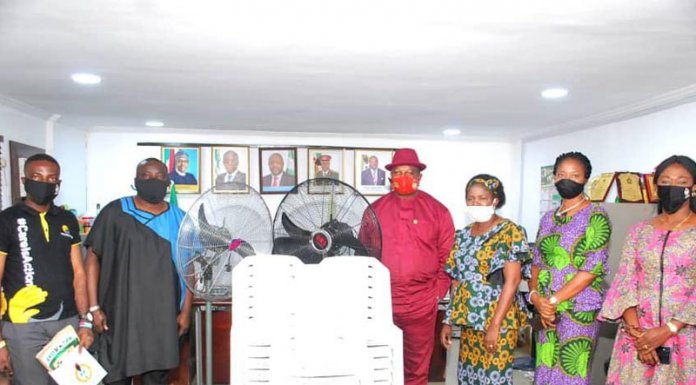