Nollywood star, Richard Mofe-Damijo recently celebrated his 19 wedding anniversary with wife, Jumobi. The movie star took to his social media page where he shared beautiful photos while penning sweet messages alongside, all loved up as they mark their anniversary, writes Ferdinand Ekechukwu

Veteran Nollywood actor, Richard Mofe Damijo, popularly known as RMD, celebrated 19th wedding anniversary with his beautiful wife, Jumobi Adegbesan on December 29. The award winning Nollywood star, considered Nigeria’s leading ‘Prince of the Silver Screen’, took to his Instagram page to celebrate his anniversary with sweet words to his wife. The popularly actor confessed that the secret behind his smiles was his marriage to the former OAP, as he appreciated the relationship he has had with her over the years.

Sharing sweet photos on this occasion of his 19th wedding anniversary with himself and Jumobi whom he fondly calls Abike, he thanked her for making him love every moment of their marriage. Sharing the first photo, he wrote: “19 years and counting…. and you still have me laughing and loving every moment we share. My Abike. Thank you sweetie! #rmdsaysso #weddinganniversary #themofedamijos #19yearsnorbebeans.”

Sharing another photo, he wrote: “19 years nor be beans o. Love you Abk for loving me through it all and making me a better man. #19yearsnorbebeans.” They got married in 2000, several years after he lost his first wife, May Ellen Ezekiel in a Lagos hospital. It’s been a commonplace to see the superstar actor pronounce his affection and emotion for his wife. Same way he shares pictures of his family on Instagram and oftentimes expresses his gratitude for the close bond he has with his children and grandchildren.

Beyond this, the former Commissioner for Culture and Tourism in Delta State often shares family experience and successes via his social media pages. RMD is a proud father of five kids; three sons and two daughters and judging from the Instagram photos he puts up, the family shares a strong bond. It was said that those who worked closely with Jumobi when she was an OAP on African Independent Television (AIT) would recall her dreams to be known as Mrs. Mofe Damijo. True to her dreams, she had the love of her life proposing to her shortly after the demise of his first wife May Ellen Ezekiel in 1996.

Although Jumobi went under the radar after the marriage, RMD seizes every opportunity to celebrate the woman who has brought so much sunshine to his life. They are known to grace social events together but keep their marriage off social media, which is one reason attributed to the success of the union as it was the resolution of Jumobi to stay off the limelight for her husband and to face the home front. Over the years, Jumobi has built a wonderful family with her famous actor and she has achieved quite a lot of success in the business and corporate world since she left AIT.
RMD once wrote: “I have never done a WCW post so here we go. Here is wifey at a family function recently. She rarely allows her pictures to be taken and video recordings are a no-no but since she has a soft spot for her friend turned sister @brownsugar4bim who made the fabulous outfit she’s wearing, she obliged with a stern warning that it must not be on social media.

“She constantly warns me to keep her away from my social media but I am taking the liberty to post this anyway, anything wen wan happen, make e happen because today the world must see not just my Woman Crush Wednesday but my Woman Crush Everyday as I tell you all that only very few things ring truer than Happy wife, happy life.”

Sometimes, the media speculate about his infidelity to his wife, but he always denies these rumours and shows that Jumobi is his one and only love. He confessed that he had never considered himself to be a “ladies man” as widely believed because, in fact, he is really shy, and says that the rumours about him are complete nonsense.

When RMD was asked how to preserve a happy marriage between two celebrities, he had said you should just listen to your second half and be open with them. He had admitted that he was happy for his wife’s success, just like she is happy for his acting career, and they always involve each other into each other’s work. His sterling career in acting has outlived his other professions. He appeared in a television soap opera, Ripples in the late 80’s and had a stint with Metro Magazines and Concord Newspapers as a reporter.

He had played major roles in 13 movies in 2003 alone, including Romantic Attraction. The following year saw him feature as lead actor in 18 movies including I Want Your Wife, Deadly Desire, and Critical Assignment – a pan African action film. He wrote, produced and acted in his first film Out of Bounds in 1997. RMD took a break from Nollywood from 2007 to 2013 to concentrate on politics. Born into a family of 18, he had acknowledged love, support, understanding, and honesty as the main conditions for happy family life. RMD to many, is a folk hero greatly admired for his achievements in acting in Africa, particularly in Nigeria. 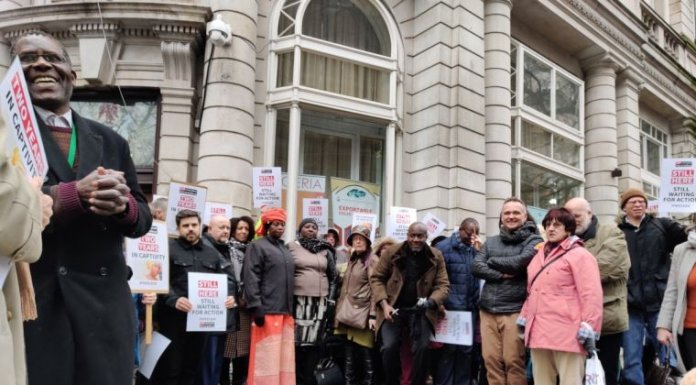 Leah Sharibu’s Mother, Others Embark on Protest in UK

James Bond Is Coming to Nigeria