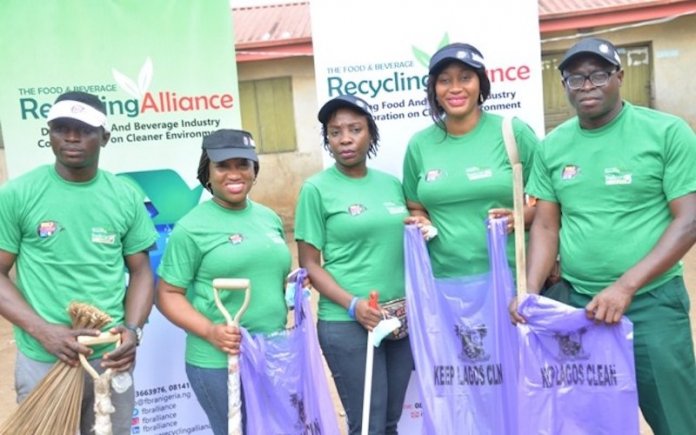 Ugo Aliogo
The Food and Beverage Recycling Alliance (FBRA) has partnered Green Janitors sustainability initiative to curb plastic waste in Badagry community as part of the three months Pick-a-Plastic campaign which was launched on December 21.

The sensitisation for the campaign at Badagry, which was initiated by Green Janitors and the Lagos Waste Management Authority (LAWMA), was part of efforts to reinforce the Blue Box programme of Lagos State Government aimed at ensuring a cleaner environment.

Speaking during the event in Lagos recently, FBRA’s Chairman, Sade Morgan, who was represented by a Director of the Alliance from Nigerian Bottling Company (NBC), Ekuma Eze, expressed the need for everyone to promote recycling at the community level in order for us to foster environmental sustainability and a cleaner environment.

He said the alliance was highly delighted in partnering with Green Janitors in its environmental conservation initiative which is in line with Lagos State Blue Box programme.

“FBRA is committed in developing a sustainable recycling economy as the Badagry initiative is part of its ongoing campaign of engaging communities to promote recovery and enhance recycling through its ‘buy-back and rewards scheme as a means of mopping up the post-consumer packing waste from the environment,” Eze stated.

He appealed to everyone to take action on the plastic waste menace in the environment through collaborative efforts of various stakeholders.
He further noted that FBRA’s activities are in compliance with the Extended Producer Responsibility (EPR) policy of the federal government which transfers significant responsibility to producers for the entire lifecycle of their product.

In his remarks, the Director of Research and Development, LASEPA, Adebodun Sewanu commended the initiative.
He said: “Imagine what would have happened if these plastic bottled were not mined through this initiative today? Our drains will have been clogged with the potential of flooding, the shorelines of surface water would have half of them, tourism will not strive with plastic nuisance on shorelines, waterways will not be swimmable and navigable.

“So, this programme is ‘a win-win’ for me by improving waste management in the coastal area not only in Badagry, but in Lagos as a State.”
Speaking on the success of the campaign, the Executive Director, Green Janitors Sustainability Initiative, Ashade Abdulsalam, said it was encouraging as both old and young embraced the initiative with sense of responsibility of keeping the environment free from food and beverage packaging waste, especially plastics.

Abdulsalam said: “This effort is to be replicated in other areas so that recycling will become a culture as we continue to promote collection of plastics especially Polyethylene terephthalate (PET).

“The participation which cut across age segments demonstrated that the sensitisation campaign carried during the commencement of the Pick-a-Plastic campaign awakened the consciousness of proper waste separation from source among Badagry residents. It was a call to action which l believe would be inculcated in the people’s way of life, and l commended Lagos State and FBRA for their support in making it a success.”